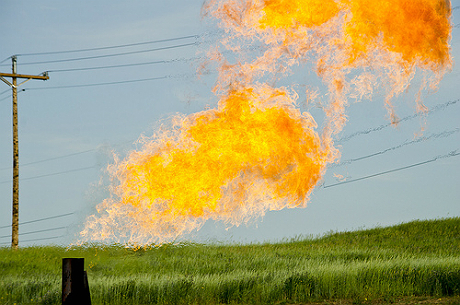 The amount of natural gas being burned away at oil wells in North Dakota rose the most in more than a year in July, and state officials now say it may take new regulations to tackle the problem.

Oil and gas producers burned, or flared, 30 percent of the gas produced at wells in the Bakken formation, up from 28 percent in June, according to figures released Friday by the North Dakota Oil and Gas Division. That’s below the high of 36 percent in September 2011 but far above the state’s historical average.

The rise was the biggest percentage-point increase since April 2012, when it rose to 34 percent from 32 percent in the previous month.

North Dakota has relied on private companies to find ways to reduce the amount of flaring. However, the state recently did some modeling that shows the level of flaring won’t fall below 5 percent until after 2020, state Mineral Resources Director Lynn Helms said on a webcast with reporters.

“It doesn’t look like the market gets us far enough, fast enough,” Helms said. “It’s going to take some kind of regulatory policy.”

Any new rules are likely to affect the amount of oil production, Helms said. A proposal is unlikely until early next year, after a new gas plant and pipeline come online, he said.

North Dakota is in the midst of a historic oil boom — oil production rose to a record 874,460 barrels a day in July, making it the second-biggest oil-producing state. However, gas prices have fallen to 10-year lows in the last two years, making it attractive for some companies to burn the gas in flares rather than to build pipelines to ship it to market.

Environmentalists and residents are pushing the state for a solution because flaring produces greenhouse gases that contribute to climate change and because it wastes resources (EnergyWire, Sept. 10).

Some of the July flaring increase may be temporary — a power outage affected one plant that processes natural gas and another was shut down due to equipment problems, Justin Kringstad, director of the North Dakota Pipeline Authority, said on the webcast. Still, the state burned away more than 8 billion cubic feet of gas, worth about $25 million at current prices.

Any solution is likely to be daunting.

In the Bakken field, wells produce about 1,000 cubic feet of gas along with every barrel of oil, Helms said on the webcast, and some areas of the field produce even more gas. Oil and gas producers connected 218 wells to pipelines in July, Kringstad said. However, there were 226 new wells drilled that month.

Gas in the Bakken tends to be high in liquids such as propane and butane, which can pool at the bottom of a pipe, forcing the operator to remove them with a tool known as a pig, Kringstad said.

The state Legislature passed a measure in the spring offering new tax incentives for companies that use gas to generate electricity or find other alternatives to flaring.