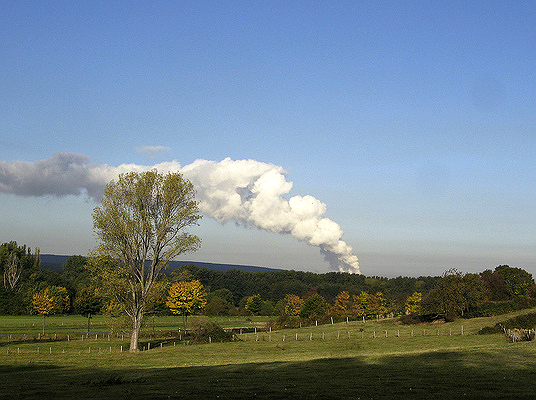 New research from a national environmental group finds that the cost of producing electricity from renewable resources like wind and solar is lower than that of conventional coal-fired generation when factoring for the adverse costs of climate change and human health impacts.

That conclusion, derived from analysis on the “social cost of carbon,” is at the heart of a study published in the Journal of Environmental Studies and Sciences by Laurie Johnson, chief economist of the Natural Resources Defense Council’s Climate and Clean Air Program, Starla Yeh of NRDC’s Center for Market Innovation, and Chris Hope of the Judge Business School at the University of Cambridge in the United Kingdom.

“Burning coal is a very costly way to make electricity,” Johnson said in a statement announcing the research findings. “And yet, there are no federal limits on the amount of carbon pollution our power plants may release. That’s wrong. It doesn’t make sense. It’s putting our future at risk.”

That could soon change, however, as the Obama administration this week is expected to roll out proposed regulations that would limit carbon dioxide emissions from all newly built power plants. Sources close to the rulemaking process say U.S. EPA is expected to limit CO2 emissions to 1,000 tons per megawatt-hour for natural gas plants, while coal plants could see a slightly less stringent standard, on the order of 1,100 tons of CO2 per megawatt-hour.

By definition, the social cost of carbon (SCC) is a formal measure of the economic benefit that comes from eliminating one metric ton of carbon dioxide from the atmosphere. According to EPA, the SCC “is meant to be a comprehensive estimate of climate change damages and includes, but is not limited to, changes in net agricultural productivity, human health, and property damages from increased flood risk.”

But critics, including business groups, conservative think tanks and congressional Republicans, have been highly critical of EPA’s use of SCC estimates when developing new regulations, especially rules that could force coal-fired electric utilities to invest billions of dollars in environmental controls aimed at capturing and storing CO2 emissions.

Is social cost a ‘pretext’ or is it real?

Marlo Lewis, a senior fellow with the Competitive Enterprise Institute’s Center for Energy and Environment, wrote this week on GlobalWarming.org that SCC analyses “all-too-easily becomes a pretext or excuse for expanding regulatory activism and increasing regulatory stringency.”

A spokesman for the Edison Electric Institute, which represents many of the nation’s largest electric utilities, declined to comment on the NRDC study.

Yet others, including Energy Secretary Ernest Moniz, have said weighing broader impacts of carbon emissions is essential to fully assessing the environmental risks of climate change. Moreover, environmental groups argue that the widespread adoption of zero-carbon energy sources — such as wind turbines and solar arrays — can actually drive down the overall cost of electricity by avoiding billions of dollars in added environmental costs.

According to the NRDC study, federal officials have estimated SCC at as little as $11 and as much as $90 per ton of CO2, with a middle-range estimate of $33 per ton of CO2 (based on 2010 emissions and expressed in 2007 dollars). Other experts have placed the economic benefit of reducing CO2 at $62 to $266 per ton.

Regardless of which SCC figure is applied, and factoring for discount rates of 1 to 5 percent, Johnson, Yeh and Hope concluded that newly built power plants relying on conventional natural gas technology, natural gas with carbon capture and storage (CCS) or wind energy are all cheaper to operate than conventional coal-fired plants.

When the highest SCC benefit figures are applied, solar photovoltaics and coal boilers with carbon capture technology are also more economical than conventional coal, according to the study.

“Our results make a good case for strong protective standards on carbon pollution from our nation’s power plants,” Johnson wrote in a blog post on NRDC’s website. “We can help slow climate change while at the same time reducing the real cost (i.e. costs inclusive of pollution damages) of our electricity. Replacing our dirtiest coal-fired generation with cleaner options like wind, solar, and natural gas, and building new generation from these same sources instead of coal, is good economics.”

Of course, each of the SCC scenarios assumes that damage caused by the accumulation of CO2 in the atmosphere is significant, even if the impacts can’t be fully monetized. Where impacts associated with climate change have been partly monetized, such as damage from extreme weather events, experts have inferred the costs to be in the billions of dollars.

A recent report from NRDC found that extreme weather events in 2012 alone caused more than $140 billion in damage, and as much as $100 billion in repair and recovery spending fell to state and federal taxpayers.

Partial cost of CO2 emissions can be pricey

But Johnson stressed that NRDC’s findings are based on conservative estimates of both the societal costs of carbon and the projected costs of producing electricity using newer, cleaner sources. For example, the SCC estimates do not account for damage caused by conditions like forest fires, the interaction between coastal storms and higher sea levels (which scientists say was a key factor in Superstorm Sandy’s impacts), drought from extreme heat, and smog.

Using the highest-value SCC figure (a $266 benefit per ton of CO2 eliminated) and a 1 percent discount rate, Johnson and Hope concluded that a new conventional coal plant without CCS capacity would produce power at a levelized cost of 31.9 cents per kilowatt-hour based on an in-service date of 2018 and using 2007 dollars.

That’s significantly higher than the price estimate of 9.3 cents per kilowatt-hour that a new conventional coal plant would achieve when the costs of CO2 and sulfur dioxide damage are excluded, according to the study. Most of the additional costs — 21.4 cents per kilowatt-hour — were associated with CO2 emissions, while 1.2 cents of additional costs were attributed to SO2 emissions, the authors found.

“The study results show that our electricity system, which generates fully 40 percent of the nation’s carbon dioxide pollution, is costly,” Johnson wrote. “Transitioning to cleaner energy won’t just help protect us and our children and grandchildren from climate change, it’s also good economics.”

Editor’s note: The NRDC is a member of RE-AMP, which also publishes Midwest Energy News. Neither organization is affiliated with E&E Publishing, a private company.