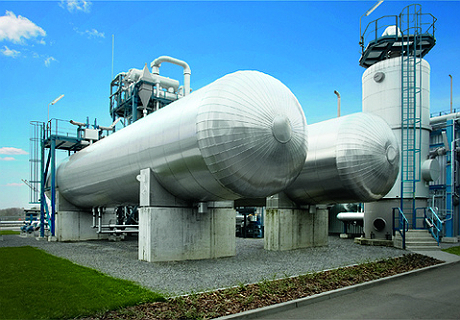 A carbon-capture facility in Germany. (Photo by Vattenfall via Creative Commons)

The elixir for climate regulations has long been, for many utilities, the promise of piping carbon dioxide emissions into underground formations where they could stash the gas and avoid paying money to release it into the atmosphere.

But until Friday, there was limited ambition in the industry, and among lawmakers, to advance that technology, because there was no penalty for releasing carbon. Those calculations could be changing with EPA’s proposal Friday requiring future coal plants to retain up to half of their CO2 emissions, according to some analysts.

Republican lawmakers reacted vehemently to the carbon rule, accusing President Obama of dismantling the coal industry. But the question now is if the utilities will pressure Congress to accelerate the development of carbon capture and sequestration and if Congress will listen, some observers say.

“There’s no question that ultimately there’s going to be more investment in carbon capture and storage. And these rules will force that,” said former Sen. Byron Dorgan (D-N.D.), co-chairman of the Energy Project at the Bipartisan Policy Center. “But forcing the issue doesn’t mean the issue is resolved.”

The administration’s plan, which has been in the works for more than a year, riled up key Republicans who could play a role in expanding investments in carbon sequestration. They see the standards as an unattainable requirement that would end the construction of new coal plants. And they may be right, if the capture technology proves elusive.

“The administration does not have the ability to will technologies into existence by sheer force of the rules it imposes on American energy producers,” Alaska Sen. Lisa Murkowski, the top Republican on the Energy and Natural Resources Committee, said in a statement. “Instead, a longer-term commitment to basic, scientific research is required for the technological breakthroughs that we all seek and support.”

Paul Bledsoe, a former climate aide in the Clinton White House, said the proposed rule released Friday reflects Obama’s efforts to retain coal in an economy that is lightening its carbon load. He believes Congress could ameliorate the rule’s impact on utilities by passing legislation that provides more funding for carbon capture and sequestration, or CCS.

“I think it’s unclear whether the existing incentives, namely the loan guarantee program through DOE, will be adequate enough to drive a significant number of coal-with-CCS builds,” Bledsoe said. “There may be political opportunities for Democrats and Republicans to work together to provide additional incentives for new coal with CCS.”

He listed a series of possible things that Congress could do to spark a broader use of sequestration, such as passing tax credits, providing cash grants or basing subsidies on the percentage of carbon that a utility captures. Lawmakers could also give utilities extra incentives if they exceed the rule’s required amount of sequestered gas, he said.

So far, utilities have launched a handful of sequestration projects. All of them lean heavily on government funding or revenue from selling the carbon to enhanced oil recovery operations, or both. But that hasn’t driven the technology into an affordable realm.

“There isn’t an incentive to deploy CCS and bring down the cost,” said Eileen Claussen, president of the Center for Climate and Energy Solutions. “Will this [rule] do it? I don’t know. But it is a path forward for coal.”

Obama was in tough climate territory Friday when he visited a Ford Motor Co. plant in Liberty, Missouri, to promote his economic policies for the middle class. He never mentioned the new landmark climate rule.

Yet Josh Earnest, a White House spokesman, told reporters that there’s an “interesting parallel” between Obama’s visit to the car plant and EPA’s carbon standards. He said that the administration’s fuel economy standards on cars, finalized last year, and his newest proposed rule on power plants both face “naysayers” who warn of a stormy economic backlash.

Instead, Ford has expanded its stamping operation in Liberty.

Standing at Obama’s side in the car plant was Missouri Sen. Claire McCaskill, one of several conservative Democrats who threatened to oppose carbon cap-and-trade legislation in 2010. The Democrats’ aversion, combined with strong Republican resistance, made the bill wither.

No vote is needed on the carbon regulations, but Obama still faces some of the same challenges in convincing some in his party that restricting the use of coal is in the nation’s interest.

Sen. Heidi Heitkamp, a Democrat in North Dakota, said the new proposed rule is a “direct attack” on coal-fired plants, which provide about 90 percent of her state’s electricity. Last year, North Dakotans favored Obama’s opponent by double digits in the presidential election.

“We need a true all-of-the-above approach, which includes coal, wind, oil, biofuels and natural gas,” Heitkamp said in a statement. “Instead of pursuing these unachievable regulations that put consumers and our country’s economy at a severe disadvantage, the administration should work to help find a feasible path forward for coal by encouraging continued investments in new and existing clean coal technologies.”

The United States has committed about $11.4 billion toward carbon capture projects since 2009, when the economic stimulus package streamed $3.4 billion into industrial and utility sequestration efforts. In June, Obama committed another $8 billion in loan guarantees for CCS through DOE’s Advanced Fossil Energy Programs. It’s part of his Climate Action Plan.

Although some observers believe Congress could be sparked to provide additional funding by the rule, others say that is a remote scenario.

“I just think right now, the way that Congress is behaving in an irrational way, it’s hard for me to see that it would come up,” he said of CCS legislation.