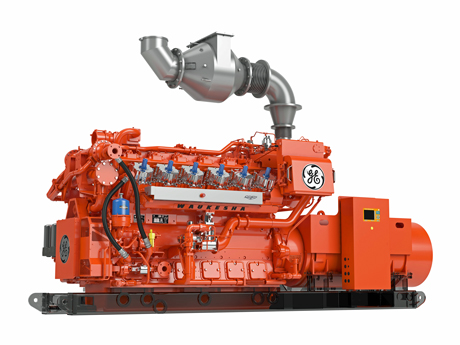 In remote and rugged areas from the Great Plains to Appalachia, drilling and hydraulic fracturing is typically powered by diesel fuel rather than electricity from the grid like more established drilling operations.

But companies are increasingly using natural gas or a mixture of natural gas and diesel, meaning significantly lower emissions and lower costs for hydraulic fracturing and enhanced oil recovery – getting the last remnants of oil out of tapped-out wells.

In Pennsylvania, the switch to powering with natural gas fracked onsite has been described as a “triple threat” reducing emissions, costs and truck traffic. And earlier this year Texas-based Apache Corp. announced plans to become the country’s first fracking operation powered entirely by natural gas, projecting a 40 percent savings on fuel costs.

Last week at the High Horsepower Summit in Chicago — a conference aimed at promoting natural gas use in mining, maritime, oil and other industries — GE Power & Water touted the recent Environmental Protection Agency certification of natural gas engines from their Waukesha, Wisconsin, plant for “mobile, non-road uses” including oil and gas extraction.

GE’s Waukesha engines can operate using liquid natural gas (LNG), compressed natural gas (CNG), or raw gas that is produced onsite by the drilling operations – once it has been processed to remove excess water and other impurities. The company says the engines are already in use at operations in Ohio, Pennsylvania, West Virginia and Oklahoma.

Shonodeep Modak is a marketing manager for General Electric.

Midwest Energy News: You say the GE engines are useful for new exploration sites where there is no electric grid; but they are also mainly billed as allowing equipment to switch from diesel to natural gas power. Is the machinery at these sites usually powered by diesel or electricity or both?

Modak: (The GE engines) are key for customers to reduce headaches as they move their equipment around. If it’s a mature field and the grid is already there, that’s the preference.

But in many of the places oil and gas exploration and production are shifting – the Marcellus, Utica – are places where the grid is really not well developed. It might take up to three years to build the transmission line which can cost a million dollars a mile and take a while to permit and build.

Once production starts the grid might come out eventually, but our customers don’t want to wait in the exploration phase.

We hear about natural gas just being flared off in places like the Bakken where they are fracking for oil, because it isn’t worth the company’s while to capture the natural gas that also escapes. Would using that gas for power on-site be a significant way to reduce emissions?

Exactly – plants that are flaring, instead could be using it for very low cost electricity. It is a simple equation of the capitalization of the engine and operating and maintenance costs compared against the cost of grid electricity.

And the technology is driven by cheap natural gas prices compared to diesel?

There’s a big benefit for our customers on cost savings. An average customer with a three-engine drill rig will spend $4,500 a day on diesel based on today’s prices. They can save as much as 40 percent using liquid natural gas. If you go to CNG the savings is 55 percent; and if you go to raw gas produced on site the savings are as high as 80 percent.

You also get the benefit of being cleaner. If you’ve been using a diesel engine and switch to a natural gas engine there’s a reduction in NOx (nitrogen oxides) of 95 percent and 10 percent  less carbon monoxide.

“Rich burn” gas engine technology helps you reduce the carbon footprint even further by another 10 percent because the combustion technology burns all the methane. Methane is 25 times more potent than carbon dioxide as a greenhouse gas.

With cost and environmental benefits – and natural gas prices have been low for years – is there a reason the industry didn’t switch to natural gas power sooner?

(Oil and gas companies) are all pioneers, but they’re conservative pioneers. They are used to running on diesel, but not as familiar with natural gas engine technology. Our first natural gas engine was installed in 2007, in Wyoming. It’s just taken time for people to get comfortable with only using natural gas as a fuel.

Are there any real disadvantages to using natural gas instead of diesel?

These engines cost about 20 percent more. They are a little larger. But you get lower maintenance costs and a longer engine life before major overhaul. If you want to use raw gas, liquid has to be stripped out first. Shale plays like Utica, Marcellus and Bakken produce gas and oil with high amounts of natural gas liquids, which has to be removed. But the (GE engines) have the ability to burn gas with very high amounts of heavier weight hydrocarbons like ethane, propane and butane that you find in these plays.

The same GE engine can combust CNG, LNG or raw gas. Our engines are being used in exploration for drilling, but are not yet in hydraulic fracturing (meaning the actual fracturing of the shale). On the production side, you will also find our products used in powering artificial and gas lift equipment as well as enhanced oil recovery.

Our engines work really well in going from 0 to 100 percent load in a short amount of time, much like when you’re driving in the city stopping and starting. The same goes for applications like enhanced oil recovery, where our engines run at constant load like where you’re on the highway, operating at a steady speed.

If there was a big shift across the industry, could the cost difference between natural gas fuel and diesel fuel affect the bigger picture economics of fracking? Could it influence gas prices or whether a company decides to pursue a particular shale play?

It does create an impact. A lot of these companies need to achieve a certain rate of return. If they want a 15 percent rate of return and they’re nowhere near that, it’s not going to help. But if you want 15 percent returns and you’re at 14 percent it could really make a difference. It certainly does swing the economics when you hit that threshold point.

How many engines do you plan to make, and might it be a significant job creator in a place like Waukesha?

Right now our biggest market is in gas compression. But we expect oil field power to be at least as big as our gas compression industry by 2015 to 2017. Will that create more growth in Waukesha? We absolutely expect that, we expect more jobs.

Do you expect to see more competitors entering the field?

I have to believe so. I think we’ll see a transformation of the fleet. We’d be very surprised if more players did not enter.