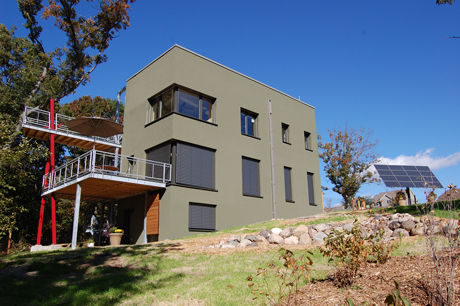 During the summer, this Wisconsin home produces more energy than it consumes. (Photo courtesy TE Studio)

Gary Konkol’s home annually produces more energy than it consumes, but his energy bill is about to go up.

Konkol is one of just eleven customers of Wisconsin’s St. Croix Electric Cooperative who own solar electric panels on their home.

A new policy that took effect in May means those homeowners will see much lower payments for the extra electricity they generate on sunny days.

For Konkol and the others, that means waiting several more years to break even on their investments — if they break even at all.

The utility, which serves about 10,000 customers in western Wisconsin, says it’s only protecting other ratepayers from subsidizing a select few.

“Unfortunately, the terms of service and [solar] rate issue has become a few members’ personal interests versus all the other cooperative members’ interests,” said Mark Pendergast, President and CEO of St. Croix Electric Cooperative, in an email to Midwest Energy News.

“It isn’t fair,” Konkol said. “I would argue it’s the other way around; that we’re subsidizing the cooperative.”

The Passive House in the Woods

In 2010, Konkol built what may be the most energy efficient home in the Midwest. St. Croix Electric Cooperative actually sponsored the construction, waiving a standard $2,000 new hook-up fee for the passive house, which attracted local and national media coverage.

The 2,000-square-foot, two-story walkout just outside of Hudson, Wisconsin, features thick insulation, high-performance windows and no furnace whatsoever. A single solar thermal panel and a 4.52 kW photovoltaic system produce all the energy the home needs — and then some.

Under the policy in place at the time Konkol built the home, that extra electricity flows back onto the grid, where it helps run his neighbors’ lights, televisions, and air conditioners. In return, the coop has reimbursed him for that power at the retail rate, the same rate he pays the utility for electricity. Depending on the time of year, it’s about 10 or 11 cents per kWh.

The concept is known as net metering, in which customers’ meters or bills run forward or backward depending on the electricity they use and produce. The past three years, Konkol has earned a credit on his bill during the summer months that paid for his wintertime usage, leaving just a $25 fixed monthly base charge.

That monthly base charge, which will increase to about $28 in January, doesn’t cover the cost of providing the service, which is closer to $40 on average, Pendergast said.

“If a member is not paying for any energy purchases, the other cooperative members must make up the revenue shortfall,” he wrote.

To address that problem, the cooperative’s board in May announced the utility will no longer pay solar owners the retail rate. Instead, it will buy customers’ surplus generation at what’s known as “avoided cost,” a rate based on what it would cost the utility to buy or produce an equivalent amount of electricity on its own.

With no grandfather clause in place, customers who bought systems based on the projected payback time could be waiting three to four times longer to break even.

Dispute over ‘value of solar’

Konkol’s original net-metering arrangement with the utility was “verbal and implied,” he said. No contract was signed. Even so, Konkol said the cooperative’s board of directors is acting unethically by not grandfathering in existing customers, as other Wisconsin utilities have done when changing their reimbursement policies.

Pendergast denied the existence of an implied guarantee and said because no contracts were in place the board decided to apply the new rules to all current and future installations.

Konkol also argues that the avoided-cost rate ignores the premium solar power deserves for generating power when it’s needed most. The avoided-cost rate is based on a 24-hour average, including overnight when electricity prices drop to low demand. The surplus power Konkol’s panels produce is delivered during sunny summer afternoons, when prices are high.

But the cooperative doesn’t have the data to back that up, according to Pendergast. He said the utility doesn’t meter customers’ energy production on an hourly basis, so it can’t say whether or not a customer is using all of their solar power in any given hour.

“Their energy production in excess of their purchases for a billing period may be on weekends when wholesale power rates are low, or in late morning hours,” Pendergast wrote. “On a hot, cloudy day, they aren’t producing a kWh.”

Solar policy expert John Farrell, a senior researcher at the Institute for Local Self Reliance in Minneapolis, said solar power does tend to have additional value over a generic power source such as coal, and the avoided-cost rate doesn’t recognize that value. (In Minnesota, regulators recently started a process to develop a “value of solar” rate that considers solar’s premium.)

The conflict between this small cooperative and a dozen members is “a microcosm of a huge war being waged between utilities and customer-generators of power over the utility’s future financial livelihood,” Farrell said. Customers are finding less expensive ways to get energy, and utilities are responding by adding fees, raising rates, and hiking fixed charges.

“They just don’t know how to deal with it,” said a frustrated Konkol. “The way we produce electricity is changing, and the old model doesn’t work.”