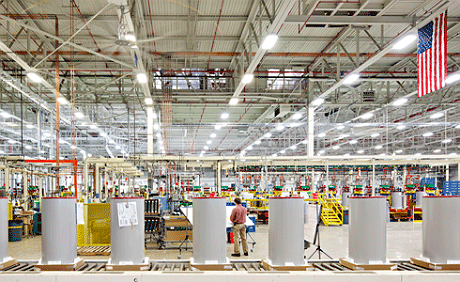 High-efficiency water heaters are manufactured at a factory in Louisville, Kentucky. (Photo via GE)

A new report by a Wisconsin nonprofit suggests such investments in energy efficiency may also play a role in growing manufacturing jobs, too.

The Energy Center of Wisconsin (ECW) study was able to trace a direct link between six utility conservation programs and 46 manufacturers in the Great Lakes region.

“The finding that, at a minimum, dozens of manufacturing operations in the Great Lakes Region benefit from the small group of utility programs we examined suggests that the economic effects are widespread and could be substantial,” the report says.

The companies supplying products to utility-sponsored efficiency projects ranged from insulation manufacturers to makers of high-tech lighting and controls.

“I think that this is the tip of the iceberg,” the report’s author, Joe Kramer, said of the 46 regional manufacturers that he was able to identify.

The ECW is a member of RE-AMP, which also publishes Midwest Energy News.

Numbers difficult to pin down

Kramer, a senior project manager at the ECW, had hoped to survey several conservation program administrators about their contractors and suppliers, and then interview those companies about the products they use before ultimately identifying where those materials and equipment were made.

Getting program administrators to disclose information about who they work with turned out to be more challenging than expected, so he instead relied on limited information from six utilities’ commercial retrofit programs in Illinois and Michigan.

The manufacturers that benefited from those utility’s programs stretched from Minneapolis to Philadelphia. They include two insulation makers, 16 HVAC and control businesses, and 28 companies that make lighting and controls.

“This is a really, really conservative list,” Kramer said. “The problem is we can’t say what proportion or percentage this might be of the overall manufacturers involved.”

The study also wasn’t able to quantify how many sales manufacturers received as a result of utility-sponsored conservation programs.

Answering that question will require more cooperation from utility program administrators, who were reluctant to reveal their supply chain, and reasonably so, Kramer said. Many utilities hire other organizations to manage their efficiency programs, and these managers may have felt they needed permission to share that information.

Others may have simply been too busy to compile the information, or skeptical about sharing it with competitors, Kramer said.

A 2012 report from the Center for American Progress said more than 89 percent of materials used by the federal Weatherization Assistance Program are made in the United States, including 98 percent of vinyl windows, 94 percent of furnaces, and 90 percent of spray foam insulation.

The Energy Center survey identified a total of 82 manufacturing locations that produced materials or equipment for the utility programs. About 56 percent were located in Illinois, Indiana, Michigan, Minnesota, Ohio, Pennsylvania or Wisconsin. The rest were elsewhere in the United States or out of the country.

All 13 of the manufacturers associated with DTE Energy’s commercial retrofit were based in Michigan, which has a state policy encouraging utilities to buy Michigan-made.

While beyond the scope of the ECW study, Kramer speculated that one explanation for why HVAC, lighting, and related controls were sourced from Great Lakes states is that they involve higher-tech, higher-skill manufacturing that is more viable in the region, which also has several large, well-established companies in those sectors.

Insulation, meanwhile, is a lower-value product that takes up a lot of space, making it less economical to ship from long distances, he said.

The ECW report, “Utility Energy Efficiency Programs and Manufacturing Facilities: Connections in the Great Lakes Region,” can be downloaded here.