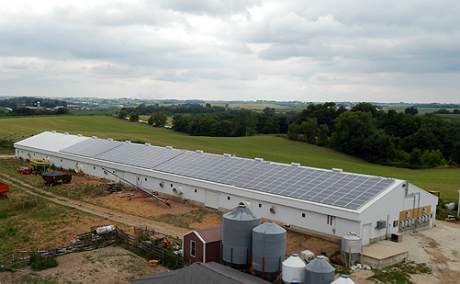 Chuck Bushman Farm flipped the switch earlier this year on 360 solar panels spread across its chicken barn in Castalia, Iowa.

Each panel is capable of generating 240 watts of power for the supplier of organic milk and chickens. Some days, the solar panels are able to produce more power than what is needed, and the farm banks it for when the demand for electricity exceeds what the panels provide. The farm also has smart meters for the chicken coop and the rest of its buildings to monitor where electricity demand is highest.

The Department of Agriculture provided the funding for the project through its Rural Energy for America Program, whose mission is to help farmers and ranchers install renewable energy technologies and improve energy efficiency. Since its creation in 2002, the program has given rural landowners grants and loans for about 7,000 projects in all 50 states.

But USDA’s ability to carry out projects like the installation of solar panels was left to dangle Monday night with the expiration of the farm bill. Without a new bill that includes mandatory funding, conservationists warn, REAP and other programs will run out of fuel and USDA won’t meet rural landowners’ demand for renewable energy and energy efficiency.

“There’s a great degree of uncertainty around the program, and word is getting out that funds are getting cut, but USDA still had demand in excess of what the funding would supply,” Andy Olsen, a senior policy advocate at the Environmental Law and Policy Center, said late last week. “What we really need is for Congress to pass a new farm bill.”

After months of wrangling, mostly on the House side, the sun set on the farm bill at midnight with little fanfare, dwarfed by the larger government shutdown.

This is the second time in two years that Congress has allowed the farm bill to expire. Last year, U.S. farm policy lapsed for three months before Congress early this year tacked a nine-month farm bill extension into larger legislation to avoid the “fiscal cliff.”

Last year’s farm bill expiration was unprecedented in U.S. farm policy history, but this year’s had been long expected as the House has proposed cuts to the bill’s food stamps program. The farm bill’s expiration, though, has been downplayed by senior agriculture leaders in Congress because funding and authorities for major commodity subsidies and food stamps will not begin to expire until the beginning of next year (E&E Daily, Sept. 20).

But several of the bill’s smaller programs — such as those in the energy, conservation, organic and trade-promotion sections — are facing uncertainty at best and shutdowns at worst as of Monday’s expiration. For energy programs, it’s a question of funding.

USDA operates seven energy programs, including one that provides loans to biorefinery producers to commercialize the next generations of fuels made from agricultural residues, perennial grasses, municipal solid waste and algae.

Most share a foxhole with REAP, which the department also uses to install pumps at gas stations capable of dispersing higher blends of ethanol.

While they retained their authorizations to operate when the farm bill expired at midnight, the programs are left with a dwindling supply of carryover dollars and no certainty that funding will be available in the future. Planning for future projects will likely become more complicated the longer the nation is without a new bill.

“This year in a couple of the programs we had some carryover mandatory dollars that we were able to utilize. But those opportunities are just about gone,” said Doug O’Brien, USDA’s acting undersecretary of rural development, in an interview last week. “We’re running out of that fuel that is moving these renewable energy programs.”

Rural advocates say the programs are already on life support because of both uncertainty over the farm bill and diminished dollars from congressional appropriators — discretionary funding for REAP this year totaled about $3 million, compared with the $25 million that the farm bill had authorized for each of the past four years.

A year ago, all of the farm bill’s energy programs were among 37 “stranded” programs that did not have an authorization beyond fiscal 2012. While they were reauthorized in the farm bill extension, none of the programs was provided with any mandatory funding.

The 2008 farm bill provided for a total of $255 million in mandatory funds for REAP and $320 million for the Agriculture Department to offer to biofuels producers as part of its Biorefinery Assistance Program.

In the absence of fresh cash, USDA is using carryover mandatory funding from the 2008 farm bill to enroll new participants in the programs, according to the agriculture official. Though the department expected to be able to exceed $35 million this year in grants through the Rural Energy for America Program, energy program accounts are just about tapped out.

O’Brien, whose office administers the programs, said the department is doing its best to work with the funding it’s been given.

“As folks who work in the department, we certainly are cognizant and concerned about what happens about policy in the future,” O’Brien said, “but at the end of the day, we have — and have had — great tools and we’ve just been focused on making sure we’re implementing those in the best way possible.”

The farm bill’s expiration won’t affect ongoing projects but instead hampers the department’s ability to sign up new farmers and ranchers.

“Without the new mandatory funding or appropriated dollars, which is highly unlikely in the short term, they’re essentially not going to run those programs. They’ll remain dormant to nonexistent,” said Lloyd Ritter, co-chairman of the Agriculture Energy Coalition who has worked on four farm bills.

The Obama administration and rural energy advocates are pushing for a farm bill conference committee to include the Senate version of the farm bill’s energy title, which would provide $900 million in mandatory funding for programs. REAP would receive about $48 million a year for the five-year bill’s duration, while the Biorefinery Assistance Program would receive $100 million this fiscal year and $58 million in fiscal 2014 and 2015.

The House version authorizes $1.4 billion in discretionary funding for energy programs but does not provide any mandatory funding.

Stakeholders are simply looking for a clear signal from Congress, Ritter said.

“It’s a very poor way of doing business in the federal government,” he said. “It’s just inappropriate to have programs exist and not exist and exist again. … I don’t think there’s any question it’s turning people away.”

Editor’s note: An earlier version of this story incorrectly stated the capacity of Chuck Bushman’s solar panels. They are rated at 240 watts, not 240 kilowatts.