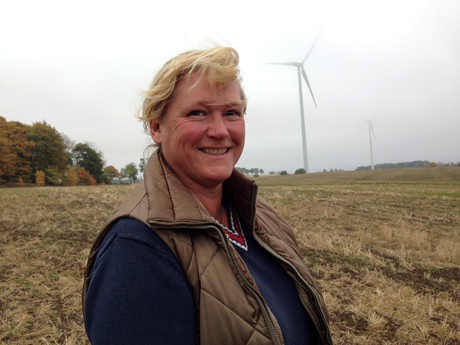 Unable to afford a share of a community wind farm, Wanja Wallamyr started a co-op for women only. (Photo by Dan Haugen / Midwest Energy News)

FALKÖPING, SWEDEN—When Wanja Wallemyr learned a community wind project would be built a few kilometers from her family farm, she knew she wanted to be a part of it.

Only problem: she couldn’t afford the 1 million Swedish Krona (roughly $154,000) minimum investment on her own.

That was in 2007, just as the farmer and rural activist was also preparing to attend a regional conference on creating economic opportunities for women.

With both issues on her mind, she came up with a single solution: Wallemyr would start an all-women wind energy cooperative.

It turned into a two-week sprint. She had just 14 days to commit to joining the wind project or not. Starting with other women at the conference, Wallemyr found nine others to join her in forming Qvinnovindar.

In an industry whose leadership still skews heavily towards men, it’s very likely Qvinnovindar is the only company of its kind anywhere in the world.

Last week, the company received a regional cooperative of the year award, and it’s been nominated for a similar prize at the national level.

The name combines the Swedish words for wind and women. The group bought a share of the three-turbine project near Wallemyr’s farm in 2007. Since then they’ve grown to 80 members and invested more than 10 million Krona ($1.5 million) in other projects, including a portion of a five-turbine installation built on Wallemyr’s farm.

Qvinnovindar members individually invested anywhere from 500 to 300,000 Krona ($77-$46,000) each, giving them an equal vote in how the company is run, regardless of the amount they put in. Members come from diverse lines of work: a farmer, a florist, a dentist, a bookkeeper, a consultant and a retail clerk, among other professions.

Initially, the women were mocked by other project investors as “the sewing circle” or “Tupperware party,” as if buying wind turbines was merely an excuse to socialize.

It caused a minor stir in town when they ran a newspaper ad before their second project soliciting new investor members, but women only.

“That was a bit controversial,” says Wanja’s daughter, Sara Wallemyr, who fielded some calls from men who wanted to know why they couldn’t join.

“I told them I could help them create a cooperative for men. That is not a problem,” said Sara Wallemyr, who now works in sales for Eolus Vind.

Both Wallemyrs say they’re often the only women in the room during meetings about wind projects, and that’s not uncommon for women working in the U.S. wind industry either.

The best estimate is that women make up about 20 to 25 percent of the U.S. wind industry’s workforce, according to Kristen Graf, executive director of Women of Wind Energy.

“The kicker is that it’s not spread evenly across all roles and positions. The vast majority of that is in admin and HR,” said Graf.

Women of Wind Energy was started in 2005 by a group of women frustrated by the lack of females attending conferences and other industry events. Today it counts 3,000 members and local chapters in more than 30 cities. The organization helps recruit women to the industry and provide career development for those already working with wind power.

“Like a lot of industries, the energy industry has sort of that old boys’ club mentality,” Montana said. “That’s changing, and I think it’s changing a little bit faster in renewables.”

‘She’s not afraid of the power’

For Wanja Wallemyr, Qvinnovindar is about empowering women, and also boosting the rural economy and displacing nuclear power with cleaner energy.

“I say no to nuclear and yes to wind power,” says Wallemyr.

On a recent afternoon, a misty fog obscured the view of the uranium-rich mountains and plateaus lining the horizon in this fertile farming area in south-central Sweden.

Wallemyr worries that continued use of nuclear power will increase pressure to mine uranium in the region, which could spoil their views and pollute their groundwater.

“If they mine these mountains, we’ll have no mountains,” says Wallemyr.

Like other Swedes, her views on nuclear power are also colored by the Chernobyl disaster, which sent a radioactive cloud over the country, poisoning farm land and increasing cancer risks.

Sweden shut down three of its ten nuclear reactors in 2006 due to safety concerns, and the questions of whether to continue operating or building new reactors is controversial.

“Women think more of the children’s future,” she says.

The impact she’s hoping to make is global in scope. The cooperative’s investments have been relatively small so far, but they’re looking to expand in wind and other green energy.

She also hopes to inspire women around the world to follow in Qvinnovindar’s path. After talking at conferences around Europe, she’s been contacted by women in Spain, Mexico and Turkey.

Frans Wallemyr, translating for his mother, summarized her words: “She wants to be part of making the world a better place. She’s not afraid of the power.”