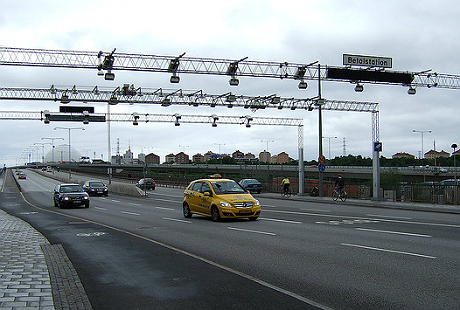 STOCKHOLM, SWEDEN—As a city of islands, Stockholm was in a unique position, geographically speaking, to implement congestion pricing for motorists. Just 18 crossings exist where cars and trucks can enter or exit the inner city.

When it comes to politics, though, the city had no special advantage.

In fact, public reaction to the proposal was very, well, American.

Opinion polling taken in the months before it was implemented in January 2006 showed 80 percent opposed the congestion pricing plan. The disaster scenarios predicted in the media involved everything from license plate thefts to bankrupt retailers. Companies would flee the city to spare their employees and customers from paying the fees. Authorities would use the payment system to spy on motorists, tracking their every turn.

“It was like the Obamacare in politics in Stockholm,” said Gunnar Söderholm, director of the city’s environmental and health administration, who was tasked by the mayor with implementing the program.

A conservative party leader told the press that Söderholm would be the first to lose his job if there were a change in majority. It was “political suicide,” he recalled.

What happened next may have saved Söderholm’s career: The system worked, and people liked it.

“All the catastrophes you could think of were predicted, and nothing of that happened,” Söderholm said.

“People saw the benefits. They actually saw them overnight,” he said. The air was more pleasant to breath. Crossing the street was less stressful. Buses ran on time and were even forced to idle to avoid getting ahead of schedule.

Newspaper editors who had previously slammed the concept changed their tone after one day.

“They said: this actually works. This is actually a different city — and it was. It was free flow in all streets, all day long,” Söderholm said. “Nobody had experienced that since we had horses on the streets.”

Stockholm has a goal of being fossil-fuel-free by 2050. Already a leader in district heating and renewable energy, addressing transportation is seen by some as the city’s biggest climate challenge.

One explanation for the turnaround in public support, according to Söderholm, is that the system technically works very well and hasn’t been a hassle to use. Instead of pulling over at a toll booth, drivers get a single monthly bill at home based on data from license plate cameras set up at the 18 entry points. They pay about $3 for entering the city during peak hours, around $2 for semi-peak hours and around $1.50 during the middle of the day. Most people pay less than $15 per month.

The volume of cars entering the city has rebounded a bit since 2006, but it’s remained about 20 percent lower than pre-congestion pricing levels. And that’s despite being one of the fastest-growing cities in Europe.

Public transit use is near an all-time high almost every day, he said, and the number of “clean cars” — electric or alternative fuel vehicles exempt from the congestion fees — has continued to climb as well.

Söderholm’s assessment of the program’s success is backed up by 2011 study by a group of Swedish researchers published in Transport Policy (and covered here by The Atlantic Cities).

Some economists predict that congestion pricing becomes less effective over time as drivers get used to the charges and are lured back into their cars by additional road space. So far, there’s no evidence of that happening in Stockholm.

“All told, the findings of this report suggest that Stockholm’s system might provide a blueprint for those American cities who do ultimately push for congestion pricing,” writes The Atlantic Cities’ Eric Jaffe.

Congestion pricing has also been a subject of debate in Chicago, where a combination of road tolls and parking fees have been debated. The reception so far has been described as “chilly.”

The question is: if American commuters ever see a full-scale implementation, will they warm to congestion pricing the way Stockholmers have?