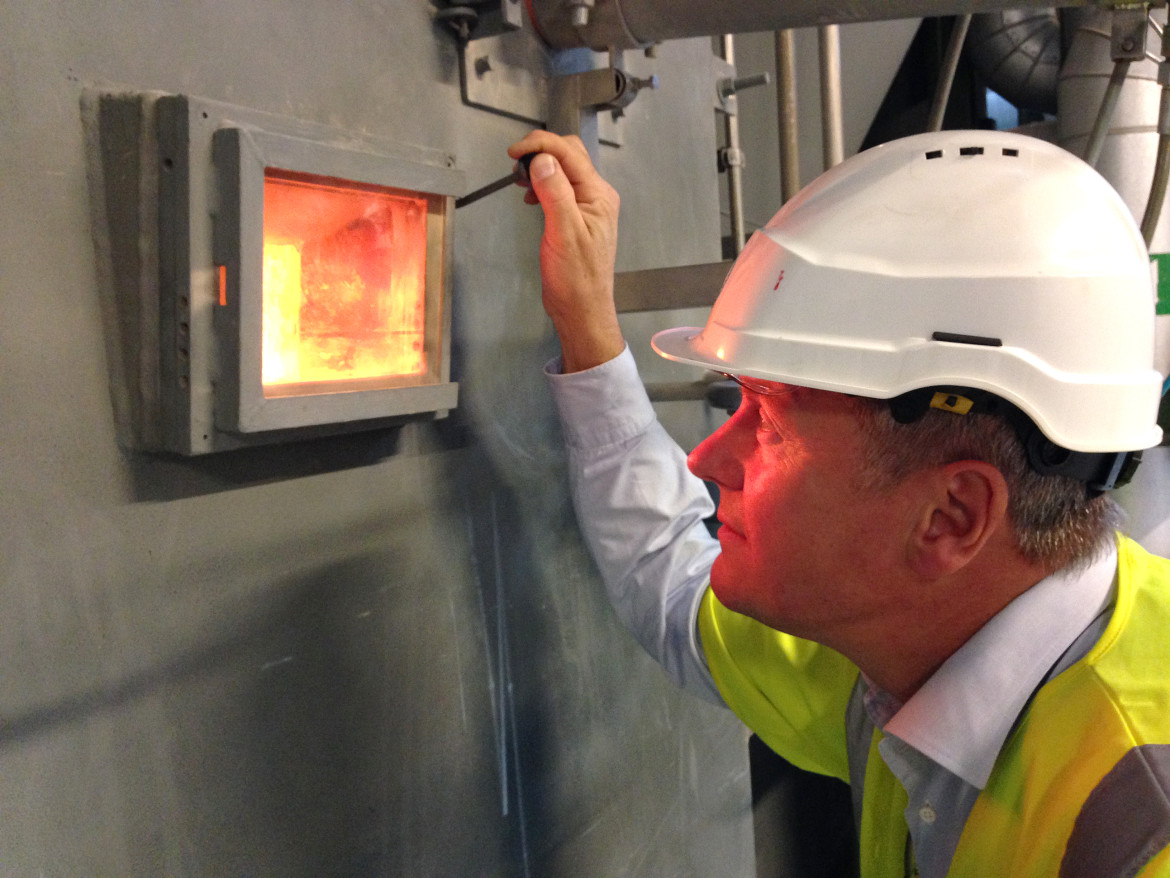 HELSINGBORG, SWEDEN—The view from the control room of the Filborna waste-to-energy plant is a dizzying one.

In a cavern ten stories below the glass-bottomed observation deck, a sea of stringy, gray and brown trash is in a state of constant settling as garbage trucks dump fresh loads into the massive pit.

A pair of giant orange cranes take turns scooping and scattering the debris, mixing it to an even moisture content before feeding it onto a slow moving metal grate that will carry it into an incinerator.

It looks like dirty business, but in Sweden this is viewed as one of the country’s great green achievements.

While waste-to-energy incinerators remain a controversial topic among U.S. environmentalists, there’s been little such debate in Sweden as the country increased its waste burning capacity over the past decade.

“I have not heard any complaints, I don’t think — ever,” said Björn Palm, head of the energy technology department at Stockholm’s KTH Royal Institute of Technology.

Sweden now imports about 700,000 tons of garbage per year to help produce electricity and heating for cities such as Helsingborg, a historic coastal hub of about 100,000 people in southwestern Sweden.

The Filborna plant is among several new waste-to-energy facilities built in Sweden since 2002, when the country adopted a ban on putting biodegradable waste in landfills.

Unable to landfill its own waste, Helsingborg had been paying to transport its garbage to other cities’ incinerators. Meanwhile, it had an aging wood-fired power plant that was getting less economical to operate.

That’s a stark contrast to what it would have likely encountered in many U.S. cities, where environmentalists have blocked or delayed projects on the grounds that they may hurt recycling efforts and worsen urban air pollution.

In Minneapolis, for example, a proposed expansion of a downtown energy recovery facility has become a subject of debate in the city’s mayoral race.

Why the political differences?

That may be part of it, but there are also bigger factors to explain why the U.S. hasn’t fully embraced waste-to-energy, namely an abundance of cheap energy and cheap land.

Sweden doesn’t sit on a wealth of fossil fuels, so it depends on importing those energy sources. As a smaller country, it also has fewer wide open spaces for stashing garbage in landfills.

The country also recognized that landfills have a major climate impact. When materials break down in landfills, they emit methane — a greenhouse gas 20 times more potent than carbon.

“When combining the resource issue along with the climate issue, it’s very easy to come to the conclusion that landfilling is very bad for the environment and for the society, because you get nothing out of it — except problems,” said Weine Wiqvist, director of Avfall Sverige, Sweden’s waste-to-energy association.

Today, only 1 percent of Sweden’s waste winds up in landfills. Half of it is recycled and 49 percent is burned in waste-to-energy facilities, up from 39 percent in 1999.

In Helsingborg, about 50 trucks per day pay to dump their trash at the Filborna plant, which is permitted to receive up to 160,000 tons of trash per year. The trash is burned to create steam, which turns a steam turbine to produce up to 18 megawatts of electricity. The waste heat from that process is captured and funneled into the city’s district heating system, supplying about 40 percent of the city’s heating needs.

Other byproducts include bottom ash, which is sorted for metals and then recycled as fill for road construction or other projects, and fly ash, which is toxic and deposited in a landfill certified to handle hazardous materials.

Air emissions are cleaned through a series of scrubbers and filters and come out “far under what’s actually permitted,” said Göran Skoglund, Öresundskraft’s press officer.

Öresundskraft claims the waste-to-energy plant, which began operating in late 2012, is the cleanest and most efficient of its kind in Sweden. It isn’t fundamentally different from the technology available in the United States, however.

“The same manufacturers are supplying both continents. This means that the emission levels are comparable,” said Matt Kasper, a special assistant for energy policy at the Center for American Progress.

Kasper has written about America’s largely untapped opportunity to curb greenhouse gas emissions through greater use of garbage-burning power plants. Among his report’s conclusions: it doesn’t need to hurt recycling rates.

“Waste-to-energy and recycling are compatible with one another,” Kasper said. “Countries in Europe that utilize waste-to-energy have some of the highest recycling rates in the world.”

Sweden’s 50 percent recycling rate, for example, is more than double the U.S. rate of 24 percent. Even as Sweden imports waste, demand for fuel hasn’t cut into recycling rates.

Avfall Sverige, the waste-to-energy association, projects that within a decade Sweden’s recycling rate will approach 60 percent, but it also expects the volume of waste generated to increase, too.

Skoglund isn’t worried about Filborna running out of fuel supply. In fact, he’s more worried about what that means for the planet’s future.

“This sounds strange, but I hope the fuel disappears,” Skoglund said. “That would be great for this planet. It’s not sustainable producing the amounts of garbage that we do.”