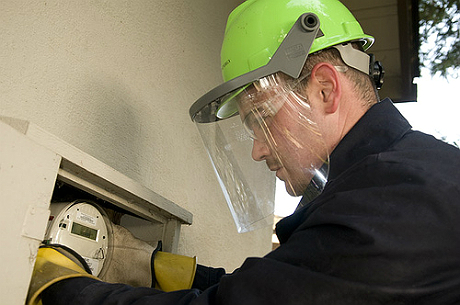 (Photo by PGE via Creative Commons)

As smart meters enable utilities to vary the price of electricity throughout the day, will consumers change their patterns of energy use in response?

If pilot programs in Michigan, Illinois, and other places so far are any indication, they very likely will.

DTE Energy, which serves Detroit and southeastern Michigan, has installed smart meters in the homes and businesses of about 1.1 million customers. It’s projected that by 2017, all 2.1 million DTE customers will have the meters, according to spokesman Scott Simons.

Now the utility is experimenting to see how it and its customers can use all those smarts.

In January, it began recruiting customers for a pilot known as Dynamic Peak Rate pricing. In August, the company began charging the 1,600 customer-volunteers according to the following rate schedule:

DTE’s residential customers normally pay 6.9 cents per kWh for the first 17 kWh per day, and 8.2 cents after that (all customers also pay a 4.2 cent per kWh distribution charge).

Although an analysis of the results hasn’t been completed, Simons said there is some intriguing early feedback.

“We’ve heard anecdotally about customers who’ve made sustainable changes,” he said, such as running dishwashers or washing machines at 11 p.m. “That’s been substantiated by load curves.

“So many customers have internalized the rate that when we’ve had to implement a critical peak-load rate, it wasn’t a terrible burden to them.”

The utility implemented the critical peak-load price of $1 per kilowatt hour 11 times over the summer, mostly for the purposes of gauging customers’ response.

No sweat – or at least, not much of one, it seems.

“Many of our customers consider it a challenge to see how much they can reduce their rate,” Simons said.

It’s likely that, once smart-meter installation is complete, the four-tiered rate structure will be made available, at least on a voluntary basis, throughout the company’s service area, Simons said.

‘We’ll get these effects from pricing messages’

Other Midwestern utilities are experimenting with time-of-use pricing.

The Minnesota Valley Electric Cooperative, which serves the outer suburbs of the Twin Cities, promised cash prizes to individuals and teams that could make the biggest reductions in their electricity use this past summer during the peak hours of 5 to 9 p.m. About 1,200 people, and 18 teams, took part.

Between Memorial Day and Labor Day, they reduced power use during the four-hour window by 38 megawatt hours.

The ability to see one’s hour-by-hour power use, while not a technical prerequisite for cutting consumption, seemed to be motivating, according to Ryan Hentges, the coop’s vice president of corporate services. The smart meter conveys “the impact of that change,” he said. “Absent that measurement, it’s more difficult to motivate people.”

In other areas of the country where utilities have tinkered with time-of-use rates, “We’ve seen demand reductions of 30 percent,” said Jamie Fine, an economist for the Environmental Defense Fund. Airline customers got used to flying at the cheap times of day, he said. He predicts that in their roles as utility customers, people will make a similar adaptation.

“People will go out and look for ways to increase their efficiency,” he said. “We’ll get these effects from pricing messages.”

Naperville, a suburb of Chicago, has installed smart meters in the homes and businesses of almost all of its 59,000 customers. Within the next year or so, the city-owned utility anticipates providing an e-Portal, which would allow customers to log in to a secure web site and view their energy use in increments of about 15 minutes.

“A lot of our customers are interested in reducing their carbon footprint,” said Linda LaCloche, the city’s communications manager. “This will allow them to be more cognizant of their use and to potentially change their patterns.”

Several small municipal utilities in Iowa are installing smart meters, and at least a couple have been experimenting with time-of-use pricing, according to Anne Kimber, director of energy services for the Iowa Association of Municipal Utilities.

“These are pilot projects that are not mandatory,” she said. “A lot of utilities are offering these because they better reflect the cost that the utility pays for power.” Generally, utilities pay much higher wholesale prices for power in the day than at night.

Just how much smart meters will reduce, or shift, overall energy use is still unclear, said John Finnegan, a senior regulatory attorney for the Environmental Defense Fund.

Although he endorses time-of-use rates as a valuable tool, Finnegan said, “Customers are not tripping over themselves to sign up for this stuff. Utilities are probably not giving it all they’ve got. I don’t know how many savings are out there.”

At present, he said, time-of-use billing systems probably offer marginal savings in exchange for a bit more effort on the part of the power customer. But he foresees a more carefree and efficient future.

“The ultimate vision here is that it’s not something you would consciously do,” he said. Rather, a customer would provide the utility with a profile of a household’s energy use, and the smart power system would automatically minimize power consumption, being clever enough to, for example, turn up the water heater just a few hours before the daily morning showers begin.