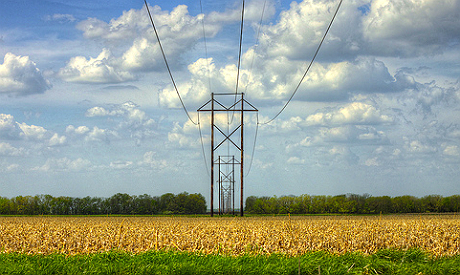 A transmission line crosses a field near Lawrence, Kansas. (Photo by David DeHetre via Creative Commons)

For the large metal tower constructed on his land, one farmer will receive annual payments for as long as it stands.

His neighbor, however, whose land is divided by a string of vertical structures, gets a more modest one-time payment.

As a historic transmission build-out continues across the region, landowners are increasingly questioning the fairness of rewarding wind project participants more than those who allow transmission lines to cut across their property.

“You know what they’re getting paid for those turbines, and it’s pretty good,” James said. “You’re going to get a transmission line that serves those wind turbines and you don’t feel like you’re getting paid as [well].”

The comments were made Monday at the Great Plains Transmission Summit in St. Paul, where the topic of alternative landowner compensation models surfaced during several panel sessions.

The conference was organized by Americans for a Clean Energy Grid and sponsored by Midwest Energy News.

An option for annual payments

State laws, utility regulations, and practical concerns all stand in the way of widespread changes to the way property owners are compensated for transmission line easements, but at least one company is experimenting with a new approach.

Clean Line Energy Partners is offering annual payments to landowners along its Rock Island Clean Line project, a 500-mile direct-current transmission line that would deliver 3,500 megawatts of wind power from northwestern Iowa to the Chicago area.

President Michael Skelly said they, too, heard landowner complaints about the disparities between turbine and transmission payments.

“I think their argument makes sense,” Skelly said in an interview.

As a “merchant transmission developer,” Clean Line Energy Partners isn’t regulated like a traditional utility. Its customers are wind farm developers who will pay to get their power to market, like a toll road for electrons.

That distinction has given Clean Line the legal leeway to get creative with its landowner payments. The company is offering an upfront payment for the value of the land, plus an additional “structure” payment based on the number and type of poles or towers.

For a single pole, landowners can choose between an additional $6,000 upfront, or they can elect to receive a $500 annual payment for as long as the line is in service. For the largest, lattice structures, the payments are $18,000 upfront or $1,500 annually.

“We think that the annual payment will be pretty attractive,” Skelly said. “We’re just [starting to] acquire right-of-way, so I’m not by any stretch of the imagination declaring victory, but it does feel like the industry may evolve over time in [this] direction.”

Skelly said they felt a need to offer something different because it’s their first time working in the communities they’re approaching. They don’t have the benefit of established relationships that an incumbent utility might, he explained.

“What it does is it tells landowners that you are a partner in this project,” said Johnathan Hladik, a senior policy advocate for the Center for Rural Affairs, who praised Clean Line in his presentation at the summit for being willing to try something new.

Hladik speculated that some of the added costs might be offset later on if they lead to less litigation and fewer project delays.

Kristine Schmidt, president of ITC Great Plains, a subsidiary of the nation’s largest transmission company, was skeptical about the feasibility of royalties or other types of annual payment for transmission easements.

“When you put a wind turbine on land, or if you put a wellhead on land,” she said, “that’s a resource you’re capturing.” Transmission has more in common with roads or pipelines, in which you’re moving a resource rather than producing one, she said.

Schmidt also stressed that there are other economic benefits to a community from transmission projects besides landowner payments. For example, workers stay and spend money in the area while building and maintaining the lines.

“When you look at it holistically, there’s a lot more value being given on the local level than just that one-time payment,” Schmidt said.

Teresa Morgensen, vice president of transmission for Xcel Energy, also noted that offering annual payments would raise fairness issues for landowners with easements in place for transmission projects that have already been built.

James, of Dakota Rural Action, said it’s his hope, too, to get past the “what-are-you-going-to-pay-me conversation.”

He acknowledged that utilities are constrained by state laws and what costs regulators will allow them to pass on to customers. He’d like to see utilities help lobby to lift those restrictions, but there are other ways they could provide value to landowners, such as supporting community-owned energy projects.

James said utilities are generally well-respected and appreciated in their communities. He cited as an example the local utility’s quick response when an ice storm leveled the power line serving his parents’ property in rural South Dakota.

“This relationship [between utilities and landowners] is not in a negative place,” James said, “but building on that is something that I think you should really consider.”