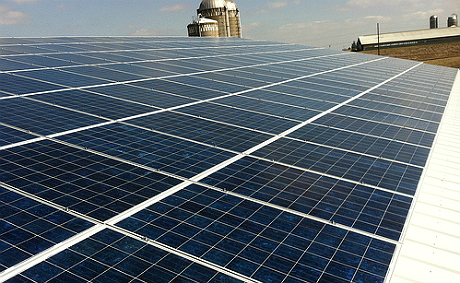 Karl Rábago could be called the grandfather of the value-of-solar tariff, but the concept is so new that “young parent” might be a more apt moniker.

The basic idea is that instead of paying customers with solar panels the retail electricity rate for their surplus power, utilities should pay a price that reflects the true value of solar to the grid. That could include added value for reducing congestion or generating during peak hours when power is most expensive.

Rábago helped develop the first value-of-solar tariff during his tenure as a municipal utility executive in Austin, Texas, which implemented the scheme just last year. Today, as an independent consultant, he travels around the country promoting and explaining the concept to others considering it.

Minnesota is the first state attempting to establish a value-of-solar tariff, and Rábago believes his baby is in good hands.

The state is about halfway through a months-long stakeholder process that will determine the guidelines for calculating solar’s value in the state.

“It reminds me of the way we did it first at Austin Energy, but even better,” Rábago said.

Fresh Energy, where Midwest Energy News is based, helped develop Minnesota’s policy and advocated for its passage.

Rábago and other observers say the process is becoming one of the most transparent, thorough, and thoughtful discussions yet on the topic, and the results could provide other states and utilities with a blueprint for trying to answer the complicated and potentially contentious question of what solar power is worth.

Since Sept. 17, utilities, solar companies, environmental groups and others have come together for a series of all-day workshops, where they’ve had the chance to share detailed presentations on what they think should go into calculating the value of solar. (The fourth and final session is Nov. 19.)

As far as renewable energy attorney Joe Wiedman is concerned, Minnesota’s value-of-solar stakeholder process so far should be considered “the gold standard.”

“The process that Minnesota has set up is a really solid, transparent process. It’s one of the best that I’ve [taken part in,]” Wiedman said.

Wiedman, who is based in San Francisco, has been participating in the stakeholder workshops on behalf of the Interstate Renewable Energy Council, one of several national renewable energy groups that’s been following the solar discussion happening this fall in Minnesota.

“It’s certainly something that utilities across the country are paying attention to, as are solar advocates,” said Annie Lappé, solar policy director for Vote Solar, a California-based nonprofit that is also participating in the stakeholder workshops.

The reason it’s on the radar of solar policy watchers is that as the first state to implement a value-of-solar tariff, Minnesota has potential to set an informal precedent, Lappé said, which means that “it’s crucial to get the details right.”

And there are lots of details.

Lynn Hinkle, director of policy development for the Minnesota Solar Energy Industries Association, said participants are essentially trying to agree on the design of a spreadsheet that can be used by utilities to calculate the value of solar power to their customers.

Minnesota’s 2013 solar law says the methodology must consider environmental benefits, as well as how solar affects other generation costs, transmission congestion, and line losses. It may include other factors such as jobs or economic impact.

The law doesn’t say how, or how much, any of these factors should be weighed. It’s up to the Minnesota Department of Commerce to come up with a draft methodology, which it will submit to the Minnesota Public Utilities Commission by Jan. 31.

“It’s not going to be a consensus process, but we want to get to a point where it’s not just one vote over the majority,” Hinkle said.

That’s important because the value-of-solar tariff won’t be mandatory. Utilities will have the option of using the methodology to propose an alternative tariff to net-metering, in which they pay solar-generating customers the retail rate for their unused electricity.

“The worst case scenario is that it sits on the shelf and goes unused,” Rábago said.

The stakeholder process underway in Minnesota makes it less likely that will happen, he said. Utilities, regulators, and solar companies will have a deeper understanding of where the numbers come from, which should make them more comfortable working with the tool.

Hinkle said the Commerce Department’s process has allowed the discussion to get as far as it has without becoming inflammatory.

“We’re beginning to see where the differences are going to be and how big they’re going to be,” Hinkle said, though he declined to offer specifics, citing a desire to avoid appearing contentious at this point in the process.

If the process continues to progress as well as it has, both Rábago and Wiedman say it could be a model for other states to replicate.

And even if the value-of-solar tariff isn’t widely adopted in Minnesota, the process should yield value itself, Rábago said:

“The good new about the worst case is that we still are going to learn a hell of a lot about this distributed resource.”