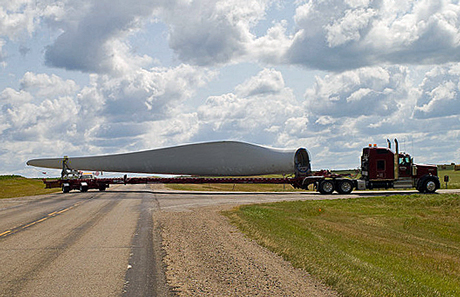 A wind turbine blade being hauled by truck in North Dakota. (Photo by Daniel Liu via Creative Commons)

Renewable energy has been on a roll in the Midwest until recent months, and the whims of federal policy could slow things even further, according to a new report.

The American Council on Renewable Energy is in the process of surveying the state of renewable energy in the U.S., region by region. Their latest report, titled Renewable Energy in the 50 States: Midwestern Region, looked at 12 states: Iowa, Minnesota, Illinois, Ohio, Nebraska, Kansas, Missouri, the Dakotas, Wisconsin, Michigan, Indiana. The survey catalogs state policies, recent renewable developments in the marketplace, and the employment and investment stimulated by renewables.

Although it still relies heavily on coal, the nation’s midsection is noteworthy for its production of wind energy and biofuels, author Lesley Hunter wrote. More than one-third of the nation’s wind capacity is located in the 12-state region. Of the nine states nationwide that produce at least 10 percent of their electrical power from wind, five are located in the Midwest. In 2012, she wrote, installed wind capacity in the Midwest grew by 29 percent.

The rate of growth has slowed considerably in 2013, she noted, probably in large part because, although the expiring federal wind production tax credit was extended for a year, it happened late enough that it probably discouraged some potential wind projects.

Also, Hunter said, about 80 percent of the country’s biofuels are produced in the Farm Belt.

Major airlines are collaborating with biofuel companies and research institutions to produce renewable jet fuel in the Midwest. In May, the U.S. Department of Defense chose to develop plants in Nebraska and Illinois to produce biofuels to power jets and ships by 2016.

As with the development of wind energy, however, Hunter pointed out that the development of biofuels depends on a federal policy – the renewable fuels standard. It’s now being hotly debated – and litigated — as to just how much biofuel the federal government should require to be mixed into gasoline and other fuels.

The 12 states reviewed in the ACORE study vary considerably in their approach to renewable energy. Eight have renewable energy standards, mandating that investor-owned utilities generate a specified proportion of energy from renewable sources by designated years. Most ambitious among the 12 states is Minnesota, where the law requires between 25 and 31.5 percent of electricity to come from renewables by no later than 2025.

The less-ambitious goals call for generating 10 percent of energy from renewable sources by 2015, for example. That includes North Dakota, which already derives 15 percent of its power from renewables.

Compared to wind, the Midwestern states have made much less progress on solar, Hunter said, with Ohio standing out as an exception. Ohio, although in last place for its overall renewable capacity, added 25 megawatts of new solar generation in 2012, and that another 5 megawatts went online this past April.

And Minnesota this year added to its renewable portfolio standard a solar energy carve-out, which requires investor-owned utilities to supply at least 1.5 percent of their energy sales from solar power by 2020.

Hunter noted that the Midwest has more solar potential than Germany, which has much more installed solar generation.

Xcel Energy, for example, announced recently that it would construct four wind farms in Minnesota, with a capacity of 600 megawatts, saying wind is a “low-cost substitute for natural gas and other fuels right now.”

Hunter also pointed to the decision by two of Michigan’s largest utilities to terminate the surcharge on customers’ bills that was initiated to cover the cost of new capacity mandated by the state’s renewables standard. The reason? Renewables were costing less than projected.