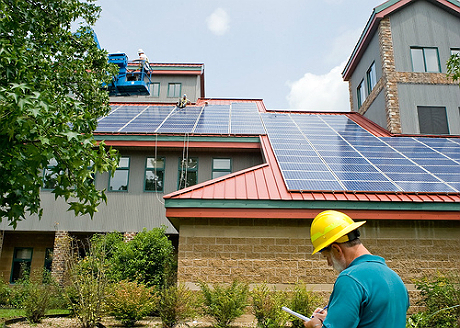 The eastern Great Lakes and mid-Atlantic region could rely on wind and solar power for as much as 30 percent of their generation capacity — without threatening electricity delivery — with net benefits even after additional transmission lines and reserve resources are added, according to a preliminary study released by the PJM Interconnection, the region’s grid operator.

The study, by GE Energy Consulting, investigates several scenarios for additions of wind and solar generation to the PJM grid, which extends from New Jersey to to Ohio and parts of Michigan, Indiana and northern Illinois. It calculates the amount of new transmission lines needed to deliver the renewable energy and the required backup generation to support the variable wind and solar power.

The main impacts it reports are lower emissions of pollutants and greenhouse gases; no power outages and minimal curtailment of renewable energy; lower systemwide energy production costs; and lower wholesale customer power costs with the additional wind and solar resources.

“Even at 30 percent penetration, results indicate that the PJM system can handle the additional renewable integration with sufficient reserves and transmission build out,” GE said.

PJM shared the preliminary findings with industry stakeholders this week but won’t discuss the report until a final version is ready. The study is a new entrant into an ongoing debate over the costs and benefits of higher use of renewable power in the U.S. generation mix.

In one key assumption, GE concluded that onshore wind farms serving PJM would be running between 14 and 18 percent of the time. Solar units would have an operating capacity of between 55 and 66 percent, depending on the type of units. Critics of wind power have argued that the units would run less often, requiring more backup from conventional generation.

“The rhetoric is sometimes that you need enormous amounts of backup generation to support a high level of renewable power, and it consumes all the benefits,” said Michael Jacobs, senior energy analyst for the Union of Concerned Scientists, who was part of the audience for the PJM briefing. The GE research finds that isn’t the case, he said.

GE reported that if renewable power were to make up 20 to 30 percent of generation capacity, the grid management would be “significantly different” from today’s common control room operations. But it did not find that reliability would be compromised, even on a series of high-stress days it modeled. Existing state requirements would bring renewable generation up to 14 percent of capacity in PJM.

In one high-renewables scenario, GE evaluated a mix in which onshore wind generation would rise from 5,122 megawatts now to 40,942 MW in 2026, with 4,851 MW of new offshore wind and 18,189 MW of solar generation, divided between distributed and centralized sources. In this case, renewables would account for 20 percent of PJM’s capacity.