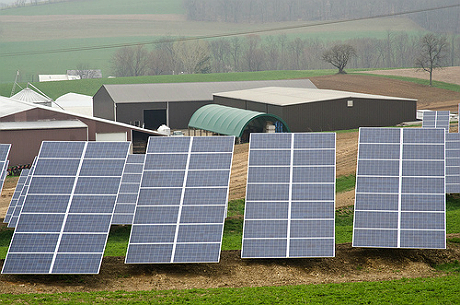 These solar panels at Heidel Hollow Farms in Pennsylvania were installed with financial assistance from the USDA. (Photo via USDA)

In a letter Monday to conferees, more than 100 renewable energy and farm organizations said they supported language contained in the Senate version of the bill, S. 954, that would guarantee $900 million in funding over the next five years for the bill’s energy programs. They said the programs, while a relatively small part of the farm bill, are critical for tapping the nation’s renewable energy and bio-based product potential.

Growth in their industries has occurred “due in large part to Farm Bill energy programs, which have used a modest amount of federal money to leverage billions of dollars in private investment,” the organizations wrote. “These new agriculture, manufacturing, and high technology jobs are at risk without continued federal investment.”

The farm bill conference committee held its first public meeting last week as members are continuing to negotiate behind the scenes even as the House stands in recess, congressional farm bill leaders said.

The House version of the bill, H.R. 2642, contains no mandatory funding for energy programs; it merely authorizes $1.4 billion in discretionary funding to be allocated by congressional appropriators.

The programs, which include the Rural Energy for America Program and the Biorefinery Assistance Program, are already running on life support because of diminished appropriations over the last few years and the expiration of the farm bill on Sept. 30. The Agriculture Department has been supporting the programs on leftover mandatory dollars from the 2008 farm bill but warns that it is running low (E&E Daily, Oct. 1).

“We believe the Senate’s bipartisan investment must be preserved,” the organizations wrote. “Helping to grow the economy in these low-cost, but transformative ways will help ease the fiscal challenge in the years ahead while also addressing other critical national challenges.”