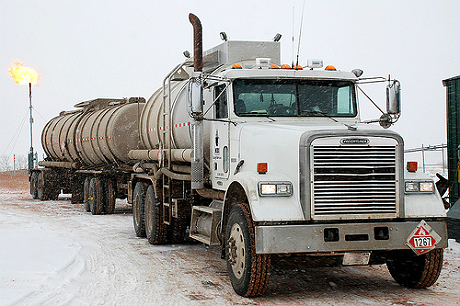 Emissions from gas flaring and truck traffic are partly to blame for an increase in haze-causing pollution in North Dakota's Theodore Roosevelt National Park. (Photo by Geof Wilson via Creative Commons)

As new oil wells crop up by the thousands in the mineral-rich Bakken play in northwest North Dakota, nearby Theodore Roosevelt National Park has experienced spikes in haze-causing pollution, according to a new study.

While the boom has created wealth for the state of 700,000, which boasts the nation’s lowest unemployment rate, the study by Colorado State University and the National Park Service suggests the development may come at the cost of clear park skies.

The two-year study provides a much more detailed glimpse of air quality than was previously available in the 70,000-acre park, made famous for its badlands, petrified forests and bison herds.

Black carbon, which is emitted from trucks and flares, can affect both health and visibility and also contributes to climate change, researchers said.

While visibility has improved across much of the country — driven by reductions in emissions of sulfur dioxide and nitrogen oxides from power plants and vehicles — that trend isn’t holding up in western North Dakota and eastern Montana.

The trend is acute in Theodore Roosevelt, which is one of 156 federal Class 1 areas designated for the highest levels of visibility protection under the Clean Air Act. The area is supposed to be returned to natural visibility within 50 years, according to U.S. EPA’s regional haze rule.

Over one 24-hour period last winter, ammonium nitrate levels averaged 8.7 micrograms per cubic meter, or about nine times the average concentration in the rural West. That level is less than one-fourth the concentration EPA considers a health risk.

“The biggest impact we’ve seen so far are these high particle formations that create haze, which impacts visibility,” said Jeff Collett, head of CSU’s Atmospheric Science Department and a co-leader of the study.

The concentrations are “significantly higher” than in other rural regions and even exceed levels in Pinedale, Wyo., the site of one of the nation’s largest gas plays, Collett said.

The spikes are likely associated with increased nitrogen oxide emissions from truck traffic, drilling rigs and other combustion activity that accumulate and lead to fine particle formation during stagnation periods, he said.

The fine particles form when nitric acid combines with ammonia. While the source ammonia is a mystery, there appears to be no shortage in the region. It means future increases in nitrogen oxide emissions could translate to even greater concentrations of fine particle levels and associated haze, Collett said.

Drilling activity has soared over the past several years in the Bakken, where roughly 2,000 new wells are spud each year and nearly 30 percent of the natural gas is burned off in flares, contributing to the formation of particulate sulfates and nitrates. Thousands of trucking events are required for each well, NPS said.

It’s a concern for park staff, who have lobbied to raise awareness of the impacts of drilling on the park’s bucolic scenery.

“Being able to see long distances is very important to visitors,” said park Superintendent Valerie Naylor. “We want to keep our air as clear as possible.”

Across the West, haze-causing fine particles have reduced visibility from a natural range of 140 miles down to 33 to 90 miles, according to EPA.

While the vast majority of the drilling activity has occurred on private lands north of the national park, it’s estimated that within a decade or so, the state could house as many as 40,000 wells on and around public lands managed by the Bureau of Land Management and Forest Service.

Researchers are not yet 100 percent certain that regional oil and gas activity is responsible for the fine particle spikes, but they believe there is a strong connection. Regional sources such as the Canadian oil sands could also be at play, they said.

The study, which is being funded by the Park Service and will begin another round of measurements this month, seeks to determine where the emissions are coming from, and when.

The monitors were placed closer to the drilling activity than existing federal air monitors and took measurements every day instead of every third day. Measurements were taken from mid-February to early April.

It’s unclear whether EPA’s regional haze rule will require any regulatory action. The agency has so far targeted large stationary sources of haze-causing emissions, including power plants, refineries and cement facilities. The Clean Air Act gives states until 2064 to return Class I areas to natural visibility.

“It’s not a heavy hammer here, but it can start a conversation about how we resolve this issue,” Schichtel said.

According to an April 2012 Park Service memo, federal agencies have little leverage to curb oil and gas emissions in the Bakken.

An email to the North Dakota Petroleum Council seeking comment on the study was not returned this week.

CSU and NPS have planned a second season of measurements starting this month and running through March.

The team will be taking hourly measurements to clarify when the fine particle spikes occur and to identify what direction the emissions are coming from.

The team will also be monitoring for volatile organic compounds, which, if detected in high enough concentrations, could hint at the source of emissions, such as diesel trucks or oil and gas emissions, Schichtel said.

Drilling around the park is expected to continue, thanks to strong crude prices, fast permitting times and advancements in hydraulic fracturing and horizontal drilling technologies.

It’s reignited a national debate over the balance of energy development and the conservation of scenic and cultural lands.

The park is known as the “cradle of conservation” because it was a site of respite for a young Theodore Roosevelt. The park’s 600,000 annual visitors contribute $28.32 million to the local economy and support 451 jobs, according to the Interior Department.

Naylor, the park superintendent, said visitors can already see flares from about two dozen drilling rigs at night from the Buck Hill observation area in the Theodore Roosevelt’s south unit and from various vantage points along Scenic Drive in the park’s north unit.

“This landscape, which inspired President Roosevelt and still inspires visitors today, is a big economic engine for the region,” Jewell said then. “It’s also a powerful reminder that, even as we bear witness to a production boom in the Bakken, there are places important to America that are too special to drill and must be protected for future generations.”

While the federal government has limited say over where Bakken wells have been drilled, the North Dakota Industrial Commission late last month approved a plan that would prevent oil drilling activity within 2 miles of the park’s historic Elkhorn Ranch, where Roosevelt went to grieve after the deaths of his mother and wife in 1884.