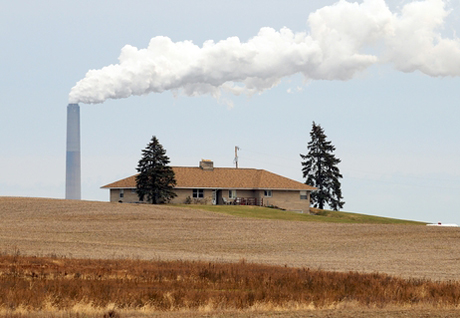 Rural Americans could be big losers if U.S. EPA writes a rigid rule for curbing heat-trapping emissions of carbon dioxide from existing power plants, electric utilities warned the agency in listening sessions on the rule that ended last week.

At the session at EPA headquarters in Washington, D.C., representatives of Hoosier Energy Rural Electric Cooperative Inc. of Bloomington, Indiana, argued that CO2 rules would hit their rural ratepayers harder than city customers because rural cooperatives have been encouraged — even by federal policies — to invest in coal-fired power.

The cooperative has spent hundreds of millions of dollars in the past five years, she said, to bring the Merom Generating Station — its largest plant in southwest Indiana’s Sullivan County — into compliance with Mercury and Air Toxics Standards. If the new carbon standards force the early retirement of coal plants, she said, Hoosier and its ratepayers will be on the hook for still more mandated expenses.

“EPA needs to ensure that the existing facility rule does not take electricity away from rural America, undoing the accomplishments of the 1935 Rural Electrification Act,” Reilly said, referring to a law that provided loans to bring power to rural communities.

Even in recent years, Reilly said, Congress was still encouraging rural electrical cooperatives to invest in the lowest-cost options when building power plants. That, she said, almost always meant coal. Rather than penalizing cooperatives for those policies now, EPA should craft a rule that will not force coal-fired facilities to prematurely shut down, she said.

Reilly proposes that EPA provide exemptions that allow utilities to make energy efficiency upgrades without triggering New Source Review requirements and that it give them credit for other actions they take that reduce greenhouse gases. She pointed to Hoosier’s electricity-generation plant at its Clark-Floyd Landfill that produces 3.5 megawatts of renewable energy from methane.

“We would like EPA to consider that for some kind of credit in renewables,” she said.

EPA held 11 listening sessions to gather public input ahead of writing its guidance to states on curbing heat-trapping emissions from their utility sectors. The agency is due to propose the guidance next June.

Reilly’s colleague Robert Richhart said he hoped EPA would promulgate a rule that allows as much flexibility as its acid rain credit trading program.

“If they took an approach similar to what they’ve done in terms of other emissions — a cap-and-trade type of approach — that would certainly be an approach that we would see to be more workable,” he said.

But he said he wasn’t encouraged by the proposal released by EPA in September that would require all new coal-fired power plants to use carbon capture and storage (CSS) technology.

Hoosier is a member of the National Rural Electric Cooperative Association, which has had private meetings with senior EPA staff to discuss the rules.

Ted Cromwell, the association’s senior principal for environmental policy, said not-for-profit rural electric utilities want EPA to write a rule that individual power plants can achieve regardless of the emissions technology they use.

“We support flexibility, but that flexibility has to be applied correctly through the individual state programs and based upon emission limits for each generating facility,” he said.

Allison Wood of Hunton & Williams LLP, who spoke on behalf of the Utility Air Regulatory Group, sounded a similar theme. She reminded EPA that Section 111(d) of the Clean Air Act gives states, not EPA, the role of setting standards for emissions reduction. EPA is only authorized to provide guidance.

She said the law also confines EPA to considering what can be achieved at an individual plant, not to the kind of systemwide reduction opportunities some environmentalists have said they hope the agency will look at when writing a far-reaching rule.

“But the Clean Air Act does not allow EPA to prescribe a standard that applies to ‘systems’ — existing source performance standards apply to ‘sources’ and must be achievable by each source using technology that has been adequately demonstrated,” she said.

Toby Short, director of federal policy and government affairs for Duke Energy Corp., echoed many of Wood’s arguments. He added that his company, which serves six states in the Southeast and Midwest, had upgraded most of its coal-fired facilities in recent years to comply with other EPA air quality rules.

“Due in large part to this modernization program, Duke Energy’s CO2 emissions in 2012 were nearly 21 percent lower than they were in 2005,” Short said in prepared remarks. EPA’s rules must avoid stranding that investment or otherwise undermining the ability of companies like his own to provide U.S. manufacturers with power at prices that can keep them globally competitive, he said.

While utilities would be most directly affected by the rule, manufacturers, petroleum producers, the chemicals industry and others also weighed in at the sessions because they are major energy consumers. Many officials warned against EPA defining its regulatory powers too broadly for fear that it might establish a precedent that will someday be used to regulate them.

Howard Feldman, director of regulatory and scientific affairs for the American Petroleum Institute, said refineries that sell power to the electric grid could be affected by the rule. EPA is also bound under the terms of a settlement agreement with environmentalists to promulgate rules for refineries eventually, although most observers predict that won’t be until after President Obama leaves the White House.

“The best time to deal with precedents is before they get set,” Feldman said in a brief interview Friday.

Feldman said EPA would be on firm legal ground if it required utilities to make efficiency improvements on site using adequately demonstrated technology. The agency should resist environmentalists’ call for a rule that forces an overhaul of the entire electric system, he said.

API would be concerned about how that precedent would transfer to refineries. “Would that mean we’d be required to affect the kind of vehicles people are purchasing?” he said.

And while petroleum producers might find themselves on the winning side of policies that advantage gas over coal for power generation, Feldman said, “we don’t think the agency should be picking winners and losers on fuel choice.”

In other words, he said, refineries might be required to use natural gas in their operations instead of refinery gas.