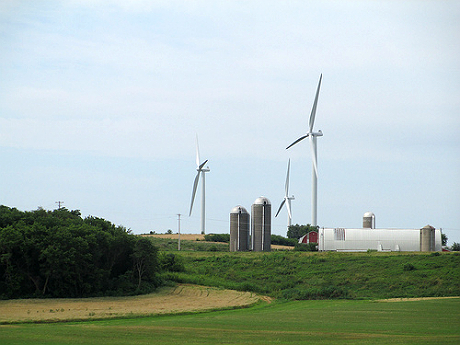 Wisconsin legislators are scheduled to take up a bill next week that would make it easier for people to sue for perceived health symptoms and property value impacts they attribute to wind turbines.

Under the proposal, anyone living within 1.5 miles of a wind turbine could sue for damages related to physical or emotional suffering, loss of property value, moving expenses, or lost profits, and the wind farm owner or operator would be forced to pick up the tab for the plaintiffs’ attorney fees.

It would also prohibit as a defense the fact that a project has already been legally permitted to operate by the state or a local government.

Opponents say the bill (SB167), if passed, would effectively put an end to wind development in Wisconsin and potentially drive up electricity rates in the state.

“The real intention of this is to kill wind [energy] in Wisconsin, and I would say it would do that,” said Joe Sullivan, regional policy manager for Wind on the Wires, a nonprofit that advocates for policies that support wind energy and transmission development.

The bill was introduced in April by Sen. Frank Lasee, a Green Bay-area Republican with a long history of introducing legislation aimed at restricting wind farms.

Wind energy supporters had previously dismissed his latest lob at the industry as too extreme to gain traction even in Wisconsin’s conservative, Republican-dominated legislature. The bill stands in contrast to the majority party’s recent priority of tort reform that makes suing businesses in the state more difficult.

While no one is predicting it will pass, opponents say anything is possible now that Senate leaders have scheduled a public hearing for the bill.

“I think it’s real enough that I’m going down to Madison,” said Sullivan, who is based in St. Paul.

Other groups lining up to oppose the bill include the American Wind Energy Association, NextEra Energy, the Sierra Club, RENEW Wisconsin, the Wisconsin League of Conservation Voters, and the Wisconsin Utilities Association.

“It’s creating liability where one currently does not exist, and that could be costly for customers,” said Bill Skewes, executive director of the Wisconsin Utilities Association.

The bill isn’t specific about how far that liability extends, leaving opponents to interpret that it could apply to wind farm owners, operators, developers, utilities, even landowners who accept easements on their property.

“Who’s going to sign an easement if they know they’re subject to pay damages to somebody who lives a mile and a half away who thinks they’ve been emotionally harmed?” said Chris Kunkle, director of the Wisconsin Energy Business Association, which represents companies in the clean energy supply chain.

Supporters of the bill include the Wisconsin Realtors Association and an anti-wind group called the Coalition for Wisconsin Environmental Stewardship.

The labor and judiciary committee that will hear the bill next week is chaired by Sen. Glenn Grothman, the Republican assistant leader in the Senate who represents an area north of Milwaukee that includes one of the state’s largest wind farms.

He said he’s dedicating time to the bill because he believes something needs to be done to address complaints from his constituents near that project.

“I’ve talked to a dozen people in my area who made a very credible case that their health has been damaged, and obviously their property values have gone through the floor,” Grothman said.

While similar claims persist around wind farms, several recent studies have cast doubt upon them.

A wide range of symptoms dubbed “wind turbine syndrome” isn’t medically recognized and research suggests it could be a “nocebo effect” spread by anecdotal claims that cause others to believe turbines are making them ill, too.

Also, a Lawrence Berkeley National Laboratory study this year analyzed 50,000 home sales in nine states in 2012 and found no evidence that wind turbines affect home prices. That’s consistent with a 2003 study that looked at home values near a wind farm in Kewaunee County, Wisconsin.

Wisconsin has uniform rules that limit local governments from adopting wind turbine setbacks larger than 1,250 feet. Sen. Lasee has sought to eliminate that cap before, and his wind litigation bill would create a de facto setback of 1.5 miles from any home to avoid legal liability.

The result would be a “wet blanket on any future wind development in Wisconsin,” Sullivan said.

The bill would also create “huge uncertainty” for existing wind farms, Sullivan said, because it appears to be retroactive. Owners or operators of existing wind farms could suddenly face tough decisions in order to avoid the risk of expensive lawsuits.

Sen. Lasee’s office did not respond to a request for an interview this week.

Sen. Grothman hinted that the bill may not advance as it’s currently written, but he said the issue needs to be addressed.

“I’m not sure in what form the bill would move forward,” Grothman said. “I think the bill is a drastic measure, and we’ll see what other suggestions we can come up with to help these people out.”

Wind on the Wires, the Sierra Club, RENEW Wisconsin, and the Wisconsin League of Conservation Voters are members of RE-AMP, which also publishes Midwest Energy News.