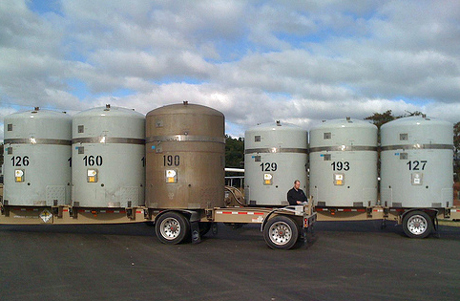 Illinois is currently home to the largest amount of nuclear waste of any state, and the industry is content to keep it that way, at least for the time being.

Officials from the Nuclear Regulatory Commission (NRC) were in the Chicago suburb of Oak Brook recently to discuss a new “waste confidence rule” that would allow spent nuclear fuel to be stored at reactor sites for 60 years after the plants close.

Nuclear industry employees and supporters say waste has been stored onsite for years and can be safely stored there in pools and dry casks for decades more. Industry opponents counter that natural disasters, terrorist attacks or accidents could mean catastrophe when waste is stored on reactor sites in populated areas.

The waste confidence rule was originally adopted in 1984 as the result of a 1979 federal court decision. The original rule posited that a permanent waste storage site would be available by 2009; a 2010 update to the rule vaguely stipulated that permanent storage would be ready “when necessary.”

As a result of a lawsuit, in 2012 a federal appeals court ordered the NRC to go back to the drawing board with the waste confidence rule and the related environmental impact statement.

Currently, 13 percent of the nation’s 70,000 metric tons of waste is stored at reactor sites in Illinois. This waste would cover half a football field piled to the height of an average person, according to Jeff Dunlap, spent fuel manager for the power company Exelon.

At the Nov. 12 hearing on the proposed waste confidence rule, employees of Illinois nuclear power plants and local officials voiced support for the new proposed rule and warned about economic impacts if the industry faces regulatory hurdles.

“Any effort to cripple the industry through vexacious regulation is dangerous not only to our state’s economy but to the health and safety of Illinois residents,” said Jerry Peck of the Illinois Manufacturers Association, noting that nuclear power provides almost half of Illinois’s energy.

Meanwhile, critics of the nuclear industry said the rule will allow the continued storage of waste on the site of power plants long after they have closed, and will allow the NRC to continue relicensing reactors even though the country has no plan for permanent waste storage.

Residents who came from across Illinois for the hearing criticized the NRC for failing to publicize the hearing adequately; most said they had heard of it through the anti-nuclear Nuclear Energy Information Service or from environmental groups.

Paul Michalak, NRC chief of the decommissioning materials branch, explained that the GEIS means possible environmental impacts at specific sites “would not be revisited” in deciding whether to renew licenses or grant new licenses, unless the NRC finds a specific reason the generic findings would be “inappropriate” to that site.

Nuclear power critics argue that every reactor is different, and that one generic impact statement cannot adequately explore the risks posed by the storage of nuclear waste at closed reactors across the country.

S.Y. Chen, a nuclear power expert at the Illinois Institute of Technology, said that a generic study relies on “a lot of assumptions.”

“But every assumption has a lot of uncertainty involved,” Chen said, noting that climate change is among the factors that could impact nuclear waste safety in the future. “I’m not sure how much this uncertainty has been analyzed.”

There has long been political deadlock over the location of a permanent nuclear waste storage site in the U.S., with the proposed Yucca Mountain site in Nevada in flux for years.

The NRC told the crowd that the GEIS supports the agency’s belief that a mined geologic storage site will be available within 60 years of the closing of any reactors. Industry backers speaking at the hearing noted that the administrative and political process to store waste permanently at Yucca Mountain has been restarted, and that there is at least $26 billion in a fund for creating permanent waste storage, money paid by utility customers as required by federal law.

The waste confidence rule is not meant to address the impacts of permanent storage of nuclear waste, but waste could effectively end up being stored at the site of closed reactors indefinitely if a permanent storage site is not found.

The industry has proposed creating Centralized Interim Storage, or CIS sites, that would take waste off reactor sites and hold it until a permanent location is eventually developed. Illinois is among the top contenders for a CIS, which many industry critics fear would ultimately become a de facto permanent waste storage site.

Nuclear power critics at the hearing lambasted the concept of moving waste to centralized interim sites, demanding that “nuclear waste only be moved once” – to a permanent storage site.

While both industry critics and supporters called for development of a permanent storage site for existing waste, critics noted there is no way to guarantee the safety of permanent storage.

“The industry folks are talking about the next 50 to 100 years, and even then they cannot predict (conditions), as Fukushima has taught us,” said Debra Michaud, founder of the Rainforest Action Network Chicago chapter. “Does the NRC have a plan for the next 25,000 years?” she asked, invoking the half-life of plutonium-239, a byproduct of nuclear reactions.

Nuclear power critics said that given the uncertainty over when or whether a permanent nuclear waste storage site will be developed, the NRC should stop issuing license renewals to existing reactors or licenses for new reactors.

“In Zion we will have 65 casks of high level waste sitting there for I’m told a minimum of 35 years, even if they start a (permanent) storage facility now,” said Douglas Orr, a resident of the northern Illinois town where a reactor is being decommissioned. “That’s the best case scenario. It makes no sense to continue producing more waste when we don’t have storage facilities. I don’t think there should be any more licenses or license renewals until a storage facility is developed.”

As an alternative to centralized interim storage, several speakers called for transferring nuclear waste stored onsite from pools to dry casks, which are considered safer. Currently more than two-thirds of waste is stored in pools.

Nuclear Energy Information Service director Dave Kraft said the finding of no significant environmental impacts from waste stored in pools is debatable given a risk of leaks and fire in the pools.

“We believe the moratorium on licensing new and currently operating reactors should remain in place,” Kraft said, “until a permanent geologic (storage) site is designed, built and in operation, not just in theory.”

A Boilermakers union member extolled the quality of dry casks, and challenged anyone who questions their safety to meet him in the parking lot after the hearing. Young power plant employees said they have no concerns residing near and working at the reactors. They are members of a group of “nuclear enthusiasts” called North American Young Generation in Nuclear (NAYGN).

“I currently live within 50 miles of three nuclear power plants as I’m sure many of you do,” said Samantha Schussele, a reactor engineer at the LaSalle reactor in Illinois, southwest of Chicago. “I plan to get married there, I plan to raise my family there, and I have the utmost confidence that my family will live in a safe community enhanced by those nuclear power plants.”

Chris Rosso described a “shocking safety culture” at the Braidwood reactor in Illinois, where he is an associate project manager. He said statistics show the industry is very safe for workers especially compared to the sector he had considered entering, construction.

His co-worker Amanda Stenson, 25, has worked at Braidwood for three and a half years as a radiation protection technical specialist and engineer.

“A lot of you guys were mentioning terrorist attacks,” she said of industry critics. “Every three years the government comes up with a team of military individuals to break into our plant…they really try to break in…they shoot fake weapons at each other… it’s like high-tech laser tag.”

She said Braidwood has repeatedly passed this safety test, and that she “absolutely” feels safe at work there.

Other speakers, however, attacked management of the Braidwood plant for leaks of radioactive tritium into surrounding groundwater, which sparked a lawsuit by the state attorney general in 2006.

“They were dumping irradiated water on a community unbeknownst to them for 10 years,” said anti-nuclear activist Maureen Headington. “I do not have confidence when I see reactors licenses being renewed regardless,” of such violations, she continued. “The NRC has never met a license renewal it did not like.”

Public comments on the rule and the environmental impact statement can be filed until December 20, emailed to Rulemaking.Comments@nrc.gov or faxed or mailed to addresses available at the website www.regulations.gov, docket number NRC-2012-2046.