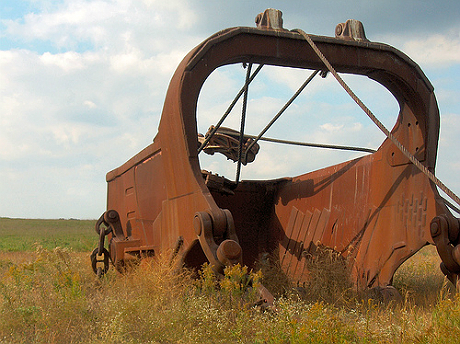 This massive dragline bucket was once used to mine coal in Indiana. The state's coal production peaked in 1984. (Photo by Cindy Cornett Seigle via Creative Commons)

It has often been said that the U.S. is the “Saudi Arabia of coal.”

However, a new report drawing on copious data from government agencies challenges that concept, noting that given global economic and energy trends, the amount of U.S. coal that will be economical to extract is much smaller than previously thought.

“Warning: Faulty Reporting of U.S. Coal Reserves” was released in October by the group Clean Energy Action, working with partners including the Rainforest Action Network and the Energy Justice Network.

Author Leslie Glustrom argues that the widely-held belief that the U.S. has 200 years worth of economically recoverable coal is grossly inflated, with economical reserves possibly tapping out in just 20 years. And she warns that power and mining companies — and the workers and communities who rely on them — will suffer if they don’t plan accordingly.

The revelations are most significant for the western Powder River Basin, the Wyoming and Montana deposits that provide almost 40 percent of U.S. coal. But the report also sheds light on the future of the Illinois basin coal industry, and on the fortunes of Midwestern power plants and utilities.

Peak coal and the Illinois basin

The report says that the U.S. may have already passed “peak coal,” the point at which production declines rather than increases. It says production may be approaching its peak in terms of volume extracted, and peak coal has probably already passed in terms of total energy content, since modern mining focuses more on low-energy coal than in decades past.

Illinois, the fifth largest coal-producing state, actually passed its coal peak almost a century ago — in 1918, according to the report. Production in 2012 was 46 percent lower than that year.

The Illinois basin is one of the country’s major coal-producing regions, covering 50,000 square miles over much of Illinois and parts of Indiana and western Kentucky.

Illinois is considered to have the nation’s third largest reserve of recoverable coal, behind Montana and Wyoming, according to the Energy Information Administration.

But based on USGS statistics, the report notes that only 36 percent of Illinois basin coal is technically recoverable, and only 9 percent is likely to be economical to extract. This is a lower percent than four other major reserves: two in Appalachia, the Somerset basin in Pennsylvania, and the Northern Wasatch plateau in Colorado and Utah.

The report notes that even with rising coal prices, the amount of coal in western fields considered economically recoverable has been significantly downgraded. Much of the coal is too deep to mine economically. Strip-mining, the standard method for the West, would involve moving too much dirt; and underground mining or gasification is possible but more expensive than strip mining.

Glustrom predicts the country’s five largest coal mines, all in Wyoming, have only 9 to 13 years of life left before they become no longer profitable. Since some of the same companies mining in the West also run major Illinois basin mines, the economic decline of western mining will have direct ripple effects on Illinois basin mining. Among other things the mining companies face higher interest rates the higher their debt rises, meaning it is harder for them to finance new or expanded mines.

Glustrom’s report notes that Peabody, the country’s largest mining company, “reported just over $1 billion in losses in the fourth quarter of 2012 and $58 million in losses for the year, driving their Adjusted Earnings Per Share down from $3.77 in 2011 to $0.84 per share in 2012.”

The major energy story of the 21st century has been the natural gas revolution and cheap gas prices undercutting coal-fired power. But the report notes that even independent of competition from gas, the production costs of coal are rising enough to make coal-fired power increasingly uneconomical. Production costs are rising because the coal that’s left is increasingly hard to extract, because of rising transportation costs and other world market factors.

Even in China, coal doesn’t necessarily have a robust future, even as that country is famously adding to its coal fleet. Pollution and economic concerns have driven China to invest in clean energy, and the country’s appetite for U.S. coal will likely decrease as it develops its own coal reserves and has access to nearer sources in Asia and Australia.

That’s bad news for U.S. coal companies that have planned to offset reduced demand for coal in the U.S. with exports to China – facilitated by controversial plans to develop export terminals in the Pacific Northwest. Experts say it is unlikely Illinois coal would be exported to China, but if Powder River Basin coal were exported that could theoretically leave a bigger market available for Midwest coal in the U.S.

The Clean Energy Action report cites Great Britain as an example of how coal areas must be forward-thinking to get ready for the time when coal production will drastically shrink or cease. British experts in the 1800s had predicted the country’s coal would last for 1,100 years, but as it turned out the coal industry was virtually dead within 150 years. Privatization of mines, reliance on cheaper imports and other factors that likely could not have been foreseen in the 19th century contributed to the drastic disparity between predictions and reality.

Glustrom notes that Missouri and Oklahoma had robust coal industries in the 1970s and 1980s, but produce very little coal now. Iowa was a major coal producer in 1917, but coal mining is virtually nonexistent there today.

In Illinois the cost of coal bought by electric utilities increased 7.5 percent per year between 2004 and 2012. Ohio, Indiana and Wisconsin also saw costs increase between 7 and 10 percent. When costs increase annually at the rate of 7 percent, the report notes, total cost will double within a decade. This rise in price is several times greater than inflation.

Given such increases, utilities risk serious financial outcomes if they invest in capital-intensive coal plant construction or upgrades, Glustrom argues. She cites First Energy’s decision “to idle the huge Sammis coal plant in Ohio after investing over $1.8 billion in pollution upgrades.”

“Electric utility leaders and their consultants appear to be generally unaware of U.S. coal cost and supply issues and are not giving careful consideration to potential coal supply constraints,” the report continues.

Climate change and the likelihood of increasingly strict limits or prices on carbon dioxide emissions have driven much of the debate about the future of coal power. Hence investors, elected officials and power companies have pushed the idea of low or zero-emission “clean coal.” This includes coal gasification plants, which turn coal into gas for distribution or burning to generate energy; and also coal plants that capture and sequester carbon dioxide.

However, carbon capture and gasification technology are still in their early stages. Even if the technologies are perfected and widely adopted, these plants are still reliant on coal – which could become increasingly expensive.

“It is not clear that any coal plant will have a reasonably-priced supply of coal for the 50 to 60 years that new plants are expected to operate for,” the report says. “Or even for the 30-40 years that utilities hope to keep old coal plants operating after retrofits.”

Environmental and health groups that oppose coal-fired power will likely cheer cost increases that persuade generators to shut down plants. But if utilities, power producers and others don’t see the writing on the wall in time, there could be serious consequences.

“It’s not only about toxic and heat-trapping emissions anymore,” noted Anne Butterfield in a Huffington Post article on Glustrom’s report. “It’s also about having enough energy generation to run big cities and regions that now rely on coal.”

Paradoxically, Glustrom told Midwest Energy News, Illinois mining could get a boost at least temporarily as the economics of coal in other regions become more difficult.

“The Midwestern states are highly dependent on coal and should begin taking a hard look at long-term coal supplies for the coal plants that are key to their state economies.”