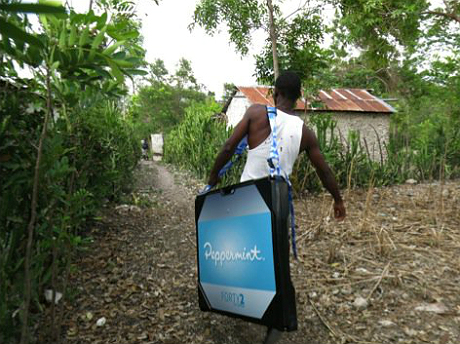 Brian Gramm’s goal was to build a portable solar generator so rugged that it could survive in one of America’s harshest environments: a stadium parking lot.

The sports fan and serial entrepreneur came up with a product he says can withstand spilled beer, flying footballs, even a fall from your SUV roof should your inebriated buddies accidentally knock it over.

As he shared the designs with friends and mentors, though, others pointed out that a device as simple and durable as theirs might have another purpose: helping in disaster recovery and other humanitarian missions.

“It became apparent that we had the right idea, but we were not quite solving the right problem,” Gramm said.

A successful Kickstarter campaign in August 2012 helped fund the company’s first production run, with 129 people pledging $500 or more for the system.

Peppermint’s product, called the Forty2, folds open like a large laptop computer to reveal two solar panels. Behind the panels are a set of lithium ion batteries, a power inverter, and an energy monitor. On the side are three AC outlets.

The product comes in three sizes, providing 250 Wh, 500 Wh and 1,000 Wh of energy storage. Charging the batteries takes between one-and-a-half and six hours, after which the devices can run a large TV between three and 12 hours without sun.

The early adopters were largely gadget geeks looking for a new way to keep their phones or laptops charged, but the company soon shifted its focus to church groups and small nonprofits doing work in areas without reliable electricity.

One of those organizations is Mater Dei, a Sioux Falls-based charity that aims to support sustainable development in Tanzania in East Africa. The group is preparing to ship 25 units to its partners in the remote Kilimanjaro region.

“I don’t know why every church in America doesn’t ship one of these generators to a sister church in a developing nation,” said John McLaughlin, Mater Dei’s executive director.

Ten of the units will be used to power mobile health clinics, where electricity is essential for refrigerating medicines and lighting operating rooms. Others will be used for lighting and irrigation, and a handful will be made available through microlending arrangements to local entrepreneurs to power small businesses.

Other groups have taken the Forty2 to Ghana, Haiti, Kenya, Nigeria, South Africa, and Papua New Guinea. Gramm said the company was in talks with larger humanitarian groups this week to deploy their product in the Philippines as it recovers from a devastating typhoon.

This type of portable or off-grid solar is a tiny sliver of the overall solar business, making up less than 2 percent of the market, according to Michael Barker, a senior analyst with NPD Solar Buzz, a market research and analysis firm.

Partnering with NGOs or governments is one strategy off-grid solar companies are using to sell systems, Barker said. Others are experimenting with leasing, microfinancing or setting up local distribution networks.

“There’s a variety of ways that the off-grid segment is financing and paying for these systems, but no one has really found the magic formula yet,” Barker said.

Gramm declined to share specific sales numbers, but said Peppermint’s total number of units sold so far is in the hundreds. But after the company’s cautious rollout, he believes they might be on the cusp of bigger things. He said they’re in more frequent contact with both larger NGOs and larger retailers.

“Every time a storm hits and knocks out power for a big area, we get a few more phone calls,” Gramm said.

Meanwhile, he takes satisfaction in knowing the product he came up with is already making a big impact in some lives. In Haiti, for example, local entrepreneurs are using the solar generators, donated by a U.S. Rotary club, to start small businesses that offer things such as cell-phone charging or ice cold soda.

One Haitian is using a Forty2 to power a “cinema house” — a satellite receiver and television that screens live soccer matches and other events. It’s the exact same set up that Gramm uses in his vehicle for tailgating.

“What we take as a luxury here, to have a better tailgating party, there, it’s feeding this guy’s family.”