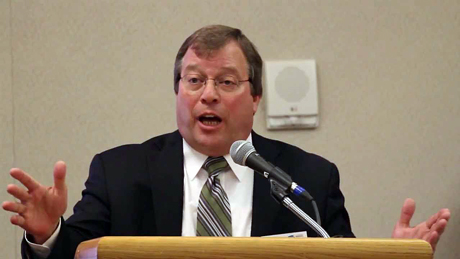 Wind advocates in Nebraska say Bruce Pontow, who represents rural co-ops in the state, has been a major obstacle to wind development. Pontow says his position has been misunderstood. (Image via YouTube)

Nebraska is rated third among the states for its wind-energy potential. And yet a year ago, it ranked only 26th for its actual wind-energy production.

It’s a long-debated issue that came to a head earlier this year, when neighboring Iowa’s vast wind farms helped it beat out the Cornhusker State to land a $300 million Facebook data center.

In fact, among Midwest states, only Ohio has less installed wind capacity than Nebraska.

The reason for the gap? Several people familiar with the curious dynamics of wind energy in Nebraska place much of it squarely on the doorstep of one Bruce Pontow.

Pontow is the general manager of the Nebraska Electric Generation & Transmission Cooperative, which is tasked with purchasing electricity for 21 public power cooperatives and one electric membership corporation that serve most of the eastern two-thirds of the state. NEG&T, as it’s known, also happens to be the largest customer of the Nebraska Public Power District (NPPD), the state’s largest utility.

Pontow doesn’t look favorably on power generated by the wind — nor the sun — and he’s made that abundantly clear to his energy supplier, according to Mary Harding, a member of NPPD’s board of directors.

“We face stiff opposition from NEG&T,” she said. “They don’t oppose wind per se. But they think wind is too expensive and not practical because it’s not dispatchable.” That is to say, unlike coal, natural gas and nuclear, it can’t be called upon at any moment, due to the vicissitudes of nature.

Harding said that any time the board expresses interest in possibly acquiring or developing wind power, NEG&T representatives “tell the board members they feel we are not representing their interests in purchasing reliable, low-cost energy.”

The issue extends beyond state borders. In January of this year, Pontow wrote to the Western Area Power Administration to take issue with proposed changes that would, among other things, foster the integration of more wind and solar energy into the federal transmission system now primarily used to move hydropower across the country.

Pontow chided the federal power marketer for looking beyond the sales of hydropower, which he claimed is the agency’s sole task.

Harding offered some insight as to why Pontow – a customer – might have some clout with the board that runs the utility that supplies his electricity.

Pontow has strongly intimated that if NPPD invests in more wind energy, he might buy his power from a source more committed to fossil fuels. But could he?

“That’s a good question,” Harding replied. “If they felt like gambling, they could go to the [spot] market.”

Pontow couldn’t be reached by phone and was “unavailable for comment” for this story, according to his secretary.

However, Pontow told the fifth annual Nebraska Wind Conference held in Lincoln earlier this month that his position on wind has been misunderstood.

“I would like to lay to rest one belief that seems to be running around out there these days — and that’s that [NEG&T] and its members somehow oppose wind generation and renewables in general,” he said. “We don’t.”

Pontow noted that his organization supports NPPD’s goal of generating 10 percent of its power from wind.

All generating resources, he said, should be considered in a “more logical, commonsense fashion,” he said — one based on cost and need.

“We’re getting closer on cost, but we’re not clear at all [on need],” he said, and observed that NPPD now is capable of generating more power than it can sell.

Harding, however, noted that when NPPD was considering spending more than $400 million to increase the Cooper Nuclear Station’s capacity by 146 megawatts, there was no objection from Pontow or NEG&T. The utility ultimately decided not to move forward with the plan.

“It seems to me,” Harding said, that Pontow’s objection “is specific to renewable resources.”

“I think we’re not sharing the same universe of information,” she added.

Position may be softening

Hansen, of the farmers union, said, “It’s clear that Pontow is opposed to wind at any price. I don’t know why. It’s a generational thing, I think. The old-school guys are entrenched: coal is king and that’s it.”

Harding, however, said Pontow’s position has “softened” over time.

“It used to be, ‘No wind, no how.’ Now they’re comfortable with 10 percent, but they don’t want to see us go beyond that.”

Wind now accounts for about 9.2 percent of the utility’s generation.

Wind does come with some complications, especially in Nebraska, and especially now. Like many power generators in this era of shrinking demand for electricity, the Nebraska Public Power District is “long on energy,” said utility spokesman Mark Becker. “Adding another asset is not a good idea if we have plenty of energy resources.”

However, some Nebraskans believe NPPD’s customers would be better served if the utility would close some of its capacity, like the coal-fired Sheldon Power Station, and replace it with wind.

NPPD’s CEO, Pat Pope, said in February that the Sheldon plant, located about 20 miles south of Lincoln, “is a bit on the bubble” and may be on the verge of retirement.

Also, the utility’s latest long-term plan, known as its integrated resource plan, calculates that the cheapest mix of energy would include more wind – 15 percent by 2020, according to Hansen, of the Nebraska Farmers Union.

Earlier this fall, NPPD could have purchased wind power for the “incredibly low” price of 2.1 to 2.3 cents per kilowatt hour and locked it in for 20 years, according to Hansen.

“This is a historic opportunity to buy wind,” he said.

Instead, the board voted not to purchase any more wind energy in 2013.

Other public power districts in the state – notably the Omaha Public Power District and the Lincoln Electric System – have invested in additional wind energy over the past several months. The Omaha district in October approved a power purchase agreement to buy up to 400 megawatts from the Grande Prairie Wind Farm.

The Lincoln Electric System approved a contract in July to purchase 100 megawatts of power from a wind farm to be built in Oklahoma.

The distinct nature of Nebraska’s power system poses another set of difficulties. Nebraska’s power is provided by a system of public power districts. As non-profits, they cannot collect the federal wind production tax credit, which substantially reduces the cost of wind.

As other non-profits have done, though, the districts could contract with a for-profit third party to build and own turbines, collect tax credits, and lease them back to the public power district.

The difference between those utilities and NPPD? Some say it remains the heavy-handed presence of Pontow.

“Pontow thinks it’s his job to tell the NPPD how to run their business,” Hansen said.

Johnathan Hladik, of the Center for Rural Affairs in Lyons, Nebraska, said, “It’s hard for the NPPD management to do anything but capitulate.” If not for Pontow’s pressure, he said, “I think the NPPD would be far more amenable to wind.”

The general absence of wind generation in Nebraska hasn’t gone unnoticed by the people of the state who, according to Hansen, have repeatedly indicated in surveys that they want more renewable energy. Hansen often is out staffing the Nebraska Farmers Union booth at events throughout the state and getting a reading of the public mind.

“People have been to Iowa, Colorado and Minnesota and seen all of those wind turbines,” he said. And the question he says he hears most often pertains to those turbines – or rather, the absence of them in his home state.

“What’s wrong with Nebraska?” they want to know.

At the wind conference this month, however, Pontow says that’s the wrong way to look at it.

“Maybe we need to be looking at what we have for emission-free generation in total,” Pontow said. Forty-seven percent of NPPD’s generation mix today, counting nuclear and hydro, he said, is carbon-free.

“That’s the number we need to be comparing with other states,” he said, “not the number of wind turbines that we’ve got hanging in the air.”

“We really have no axe to grind with wind generation,” Pontow added. “If it’s affordable and cost effective, I think it’s a wonderful opportunity.”

The Center for Rural Affairs is a member of RE-AMP, which also publishes Midwest Energy News.