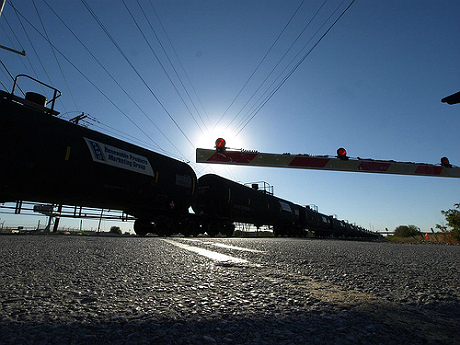 Garoz, CEO of Abengoa Bioenergy, said he was reminded of a similar reversal in policy in Spain — where Abengoa began — around the promotion of solar power. The government is currently pushing policies that would tax photovoltaic panel owners and has cut subsidies for the development of concentrated solar power, after years of support for the industry.

“The other side Abengoa has already experienced: how a government can have a reverse in policy, especially in the solar sector, creating a huge damage to the thermosolar industry in Spain with irreversible consequences going forward,” said Garoz, referring to the $27.8 billion company’s solar subsidiary. “In the United States, we’re going to see the same situation.”

“Introducing regulatory uncertainty in a country is extremely dangerous for a government that will try to incentivize and promote new projects, new investments that drive the economy in the future,” he added.

If the United States’ renewable fuel standard (RFS) is lowered, Abengoa Energy is likely to send its planned biofuels refineries to Europe or Brazil, said Garoz.

Nearly two weeks ago, U.S. EPA confirmed the biofuels industry’s fears: For the first time since the inception of the RFS, the agency would be cutting back — not increasing — the number of gallons the oil industry is required to blend in the fuel supply each year. This downward shift is likely to discourage companies from building the infrastructure for both traditional corn ethanol and the second generation of fuels from grasses, agricultural waste, wood, algae and other low-impact matter.

“We are putting the industry at risk with this reverse in policy,” Garoz said.

If EPA finalizes the low volumes it has proposed — a nearly 3-billion-gallon cut in overall biofuels production and a 1.55-billion-gallon drop in advanced biofuels — Abengoa Energy is likely to move its operations elsewhere. The company is close to finishing a 25-million-gallon cellulosic ethanol facility in Hugoton, Kansas, one of three large cellulosic plants expected to come online by the end of next year.

Brazil’s 40-year history with ethanol has created an ideal space for biofuels growth, Garoz said. Most cars can run on a high blend of ethanol to gasoline, and fuel pumps readily supply ethanol (ClimateWire, Oct. 17).

“Brazil is extremely compelling,” he said. “There’s no issue with the distribution of ethanol at the retail level.”

Abengoa owns 90,000 hectares of sugar cane plantations, which could allow the company to provide enough straw and sugar cane pulp for a 25-million-gallon cellulosic ethanol plant — the same capacity as the Hugoton facility.

That could be done with very reasonable returns and very low capital expenditures, Garoz said.

As for Europe, he said, it has the ambition to be sustainable and push for the second generation of biofuels. Europe is biomass poor, meaning that — besides household trash, which several companies have successfully converted into biofuel on the pilot scale — it has a lack of plant-based resources to make the fuels.

“There will be a phenomenal opportunity for the United States to export cellulosic ethanol into Europe in the future,” Garoz said.

In September, the European Parliament voted to cap the amount of conventional biofuels, made from corn, soybeans and canola, in the European Union’s transportation fuels at 6 percent and to require that 2.5 percent of the pool be second-generation advanced biofuels (Greenwire, Sept. 11).

Future growth will be in cellulosics

Oil companies, whose trade groups have launched a vehement campaign to repeal the RFS, are also the largest investors in both first- and second-generation biofuels, having poured in about $9.4 billion since 2005, according to Bloomberg New Energy Finance.

Nevertheless, the oil industry has resisted blending more ethanol into the fuel supply, saying that blends of ethanol of more than 10 percent could damage engines. A reduction in the RFS will likely divert oil investments, along with money from private equity and other investors, away from renewable fuels, said Garoz.

Bob Greco, group director for downstream and industry operations at the American Petroleum Institute, said that oil companies would likely continue to invest.

“At the end of the day, ethanol is a quality product that the market would [allow to] blend it,” he said. Oil companies are more likely to invest in advanced, “drop-in” fuels that can be used in existing engines without mixing.

Abengoa is no longer concentrating its resources in corn ethanol, Garoz said. Cellulosic fuels is where the company will grow.