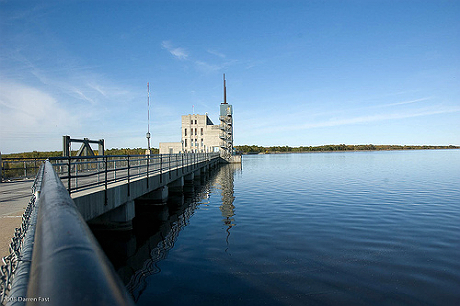 Norway has been called the “battery” of northern Europe because of its huge potential to store energy in its hydro power facilities, which produce virtually all of the country’s electricity.

When generation ramps up at Danish wind farms, Norway can slow production at its hydro facilities, storing water in reservoirs to be released later when electricity is in shorter supply.

As much as 40 percent of Danish wind power is “stored” like this behind Norwegian hydro dams, according to a 2012 paper by Norwegian energy economist Johannes Mauritzen.

In northern Minnesota, an electric utility is proposing a 500 kV, cross-border transmission line that would let it tap Canadian hydropower under a similar arrangement.

“I think we here at Minnesota Power have coupled together what I like to call the holy grail of renewable resources,” said Dave McMillan, the utility’s executive vice president.

At its core is a unique, flexible purchasing agreement with Manitoba Hydro, which operates 15 large hydro power stations that annually generate almost 30 billion kWh, much of it exported.

‘Project of the Year’

Minnesota Power has a purchase agreement to buy 250 MW of baseload power from Manitoba Hydro starting in June 2020. The companies recently agreed to terms for an additional 133 MW purchase to mirror Minnesota Power’s wind generation.

The wind and hydro investments are part of the utility’s plan to achieve a one-third renewable, one-third natural gas, and one-third coal generating portfolio. Today, 80 percent of its electricity comes from coal.

The company filed a certificate-of-need application with the Minnesota Public Utilities Commission in October for the approximately 240-mile section of the line that would sit south of the border. Manitoba Hydro is moving forward with a similar process for the Canadian section, and the international project would also require a special permit from the U.S. Department of Energy.

All of that pending, the utilities anticipate starting construction in June 2016. They estimate the project will take about four years to build and create approximately 250 jobs during the design and construction phase.

Minnesota Power would own 51 percent of the project, with Manitoba Hydro owning the other 49 percent. The cost for the U.S. segment is estimated between $400 million and $600 million, depending on the final route.

That price tag has raised a red flag for a group of large industrial customers, which asked Minnesota regulators to refer the case to an administrative law judge to settle factual issues before the Public Utilties Commission makes a decision.

“Given the cost of the Great Northern Transmission Line, the issues surrounding various routes and alternatives, and the potential for consideration of related issues such as reliability, industrial load growth, and increased demand for renewable generation, there are numerous potential contested material issues of fact,” an attorney for the industry group wrote in a Nov. 19 letter.

The project is also generating opposition from property owners as it seeks a route across scenic cabin country in northern Minnesota.

“Who is going to want to purchase a lake home or a farm with a wonderful view of 150 ft. towers?” wrote Paul and Pamela Mork, who own a home on Balm Lake in Beltrami County, near one of the proposed routes.

Mark Selmecki’s grandfather built the first log cabin on Balm Lake in the 1920s, and it remains intentionally off-grid today, a place where he and his young children come to unplug and unwind.

“To have these massive power lines destroy the view and beauty of our cabins would be appalling,” Selmecki wrote in a Nov. 19 letter to the Minnesota PUC.

McMillan said the precise route is still being refined. The biggest question is how to get around massive Red Lake, whether to wrap around on the south and west sides or to the north and east.

Minnesota Power is proposing to use just over half the transmission line’s capacity, leaving Manitoba Hydro room to strike a similar wind-balancing deal with another utility in the region.

Canadian hydro power isn’t unlimited, though. Another 1,400 MW of capacity is slated for construction, but after that it’s unclear how much more could be built.

“We actually look at it like a limited resources that we should get while we can,” McMillan said. It’s a resource they believe will increase the value of the wind investments its already made.

“We have an investment in transmission,” McMillan said, and “with it comes a very unique storage opportunity that we think may give us a leg up in the market that lies ahead.”