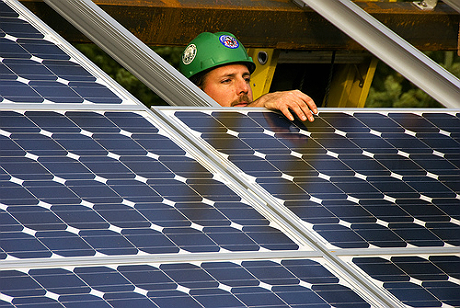 (Photo by OregonDOT via Creative Commons)

As solar energy equipment becomes more affordable than ever, prompting millions of home and business owners to consider generating their own electricity using solar arrays, the overall cost burden of such systems is shifting decidedly toward “soft costs.”

These include financing, taxes, corporate fees, installation and other nonhardware charges, according to the Energy Department.

In two reports issued Monday, the National Renewable Energy Laboratory stressed that soft costs now account for well over half of all spending on U.S. solar projects, with the greatest proportion of soft costs coming for residential systems, followed by small commercial systems and large commercial installations.

Surveys of solar system installers accounting for 93 megawatts of residential and commercial solar projects found that in the first six months of 2012, soft costs represented 64 percent of the total price paid for residential systems, up from 50 percent reported one year before.

For homeowners and businesses opting to install solar systems using third-party agreements — where solar panels, converters and other equipment are owned by an independent company — NREL found that such agreements usually add roughly 78 cents per watt in costs for residential installations and 67 cents per watt for commercial projects, according to a more detailed report released in conjunction with the benchmark assessment.

But those costs may be offset over the life of a third-party solar system by additional services, such as system maintenance and repair, provided by third-party financiers and economies of scale that large solar firms can achieve through bulk purchasing and more efficient use of capital and labor.

“While third-party financing costs may increase upfront costs, they may effectively lower the levelized cost of energy,” NREL found. Moreover, “third-party businesses have gained significant market share in the United States, driving a considerable amount of PV [photovoltaic] demand. Without this volume of third-party customers, businesses are significantly less likely to operate efficiently, which would cause overhead costs to increase.”

Experts also note that while the balance of costs may be shifting from hardware to nonhardware purchases, the overall average cost of solar installations continues to fall as the technology matures and inexpensive photovoltaic modules, many of them produced by Chinese firms, penetrate more markets.

NREL analyst Barry Friedman said in a statement that the two new reports, along with previous research, “provide a comprehensive look at the full cost of installing solar, while delineating and quantifying the various contributors to that final cost.”

Last summer, the Energy Department reported that the solar industry was flexing its muscle, installing 723 MW of capacity in the first quarter of 2013. Those solar panels accounted for 48 percent of all generation capacity that came online during the first part of the year.

According to researchers at Lawrence Berkeley National Laboratory, the average installed price of residential and commercial PV systems completed in 2012 decreased by a range of roughly 30 to 90 cents per watt, or by 6 to 14 percent, from the previous year.

Solar industry representatives have credited the technology’s rapid growth in part to the dramatic drop in hardware costs. Solar modules, for example, fell by $2.60 per watt between 2008 and 2012. Nonmodule costs, including for inverters, mounting hardware, permitting and fees, have also fallen, but more modestly, according to the Berkeley lab’s latest “Tracking the Sun” report.

Ken Johnson, a spokesman for the Solar Energy Industries Association, said in an email that finding new ways to drive down solar soft costs continues to be a top priority for U.S. manufacturers and installers.

“Even though the price of a solar electric system has dropped by more than 70 percent since 2010, we can make solar even more affordable for Americans in the future by cutting red tape and reducing embedded soft costs, such as permitting and installation,” Johnson said. “We will continue to work closely with DOE’s SunShot Initiative, as well as with state regulators all across the nation, to come up with common-sense, cost-effective solutions.”