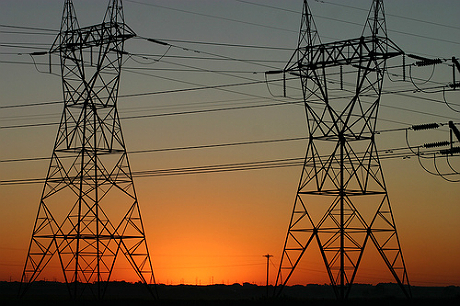 As a red-state Republican who also acknowledges global warming, Gary Hanson needs to tread carefully in conversations about the environment.

“I try to look for safe islands; islands where I can get people to agree to work together,” Hanson said.

For him, that’s meant a focus on energy independence, planetary stewardship, and a “responsible” roll-out of renewable energy that doesn’t add costs for utilities or their customers.

The following are highlights from his talk:

On climate change: “The globe’s always been changing,” Hanson said. It’s a point that he’ll concede to climate-change deniers. There’s also truth to some of their claims that humans aren’t the only source of greenhouse gases, he said. “That’s fine. Let’s recognize that.”

But we annually burn 24 trillion cubic feet of natural gas, 1 billion tons of coal, and 7 billion barrels of oil every year in North America alone, he said. “How can burning that much fossil fuel … have zero effect on our climate?” Hanson asked. “I can’t image how it could not.”

There’s no end to the political argument over climate science, so Hanson tries to approach the issue from a different perspective. Most people will agree that people have a responsibility to be good stewards of the planet, and most people will agree that fossil fuels are a finite resource. “Once they are burned, they are gone forever.” For those reasons alone, the nation has a responsibility to conserve and find alternatives, “because we want our great grandchildren to be able to have the quality of life that we do.”

On balanced generation: “We need to transition to renewable energies in a responsible fashion,” Hanson said. However, he’s skeptical about whether wind and solar are up to the task of replacing power plants. “Personally, I believe there is a possibility for too much dependance on variable resources,” he said. The same goes for natural gas. “We’ve been moving more and more and more towards natural gas for our generation capacity, and I think we need to have a more balanced portfolio than what we’re moving to,” he said.

In order to have reliable electricity, we need baseload generation, he said, and the only dependable sources of baseload power today are coal, nuclear, natural gas and hydropower. “Solar’s daytime generation can complement wind’s extensive nighttime generation to accomplish more dependable, although still variable, generation. The two of them can complement each other, especially when we move towards electric vehicles.”

Congress has failed to act on major energy issues, and that’s left a policy vacuum that’s been filled by overreaching federal agencies, he said.

“Our nation’s policy-making duties have been turned over to government departments and agencies. For many years, judicial activism was something that many of us were very concerned with, however, bureaucratic activism has taken its place,” Hanson said. “Our nation’s feet are in cement and we are nearing the end of the pier on many major issues.”

On net metering: South Dakota is one of just seven states without a net-metering policy, which require utilities to buy power from customers’ wind or solar installations at the retail electricity rate. Instead, utilities pay a lower rate known as avoided cost, based on what the company would have otherwise paid to purchase the same amount of electricity.

The reason is that wind and solar generation is variable, so utilities need to have reserve capacity available to cover dips in customers’ production, Hanson said. Utilities have to buy electricity from customer’s solar panels, and pay for backup generation to balance them out.

“So when their costs go up from net metering, from curtailed electricity, then all of the consumers costs go up. What that means is that person who builds a wind turbine on their property and sells the electricity back to the utility at the higher price, it means their neighbors are going to help pay for that wind turbine, and that’s why I have a problem with [net metering].”

Building new transmission lines is complicated and expensive, and made more challenging by the fact that each state has its own siting rules, he said.

The cost of transmission may make exporting South Dakota wind uneconomical for many years, he said. It’s less expensive to locate wind farms closer to where the electricity will be consumed. As long as there are good places to develop wind in Iowa and Minnesota, they’ll have an advantage.

“It’s going to have to be really, really concentrated there before it migrates over into South Dakota,” Hanson said. Meanwhile, South Dakota wind developers will need to rely on excess capacity on existing lines.