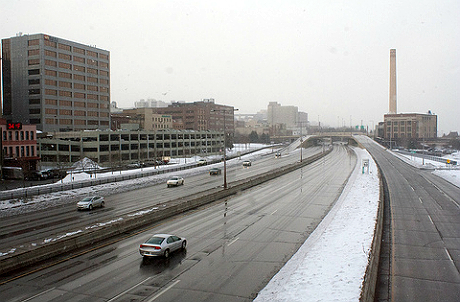 Since the 1930s, Duluth, Minnesota, has continually drawn frigid water from Lake Superior, heated it to steam in a coal-fired boiler, then pushed that steam through a network of pipes to provide heat for downtown businesses.

The district heating plant, by the city’s account, has been well maintained and extremely reliable over its 81 years of operation. The pipes are leakier and less insulated, but the system still works about the same as it did in 1932.

Which is to say, not very efficiently by today’s standards.

The city is now studying its options for modernizing the aging system to make it more flexible, economical and sustainable. A consultant’s master plan (pdf) presented Monday to the City Council recommends adding sawdust as a fuel source and converting steam lines into a more efficient, closed-loop hot water system.

“If we are going to own this, we are going to bring this steam plant into the 21st century,” David Montgomery, the city’s chief administrative officer, said in an interview. “We want to turn this into a real asset, which we think it can become, from an economic development standpoint … and from a sustainability standpoint.”

The plans are inspired in part by the success of a district energy system 150 miles south in St. Paul, as well as the lessons from a sister city in Sweden that generates almost all of its heat from a wood-fueled district energy plant.

Duluth’s district heating system was privately built but sold to the city in 1979. It currently serves more than 180 buildings in the central business district and waterfront park area — about 40 percent of the zone’s buildings.

The city would have a hard time expanding the current system, Montgomery said, because they’ve just about reached the limit of how far they can push steam. Moving hot water instead of steam through the system would allow it to reach customers farther from the central boiler.

Circulating hot water would also allow it to recover heat after it’s passed through customers’ buildings. Today, what’s leftover is discharged as condensation into the city’s sewer system, which runs back into Lake Superior. “A tremendous amount of thermal energy is lost,” Montgomery said.

Converting from steam to hot water will allow Duluth to diversify its fuel mix beyond what’s possible with a steam-only system, Ever-Green Energy concludes in its report. One new source, though, could be added almost immediately with little change in operations: sawdust.

Ever-Green estimates that Duluth could begin blending coal with sawdust in the existing boilers. Eight to 16 truckloads a day from area sawmills could supply up 25 percent of the plant’s fuel by 2015. Woodchips could be added with some additional equipment.

“Part of what’s made St. Paul’s system successful is having fuel flexibility,” said Ever-Green public relations director Nina Axelson. “Giving some of that fuel diversity to Duluth will help both from an environmental standpoint and economically, so they’re not beholden to the market for one single fuel,” Axelson said.

In Duluth’s sister city of Växjö, Sweden, city officials say the conversion to a wood-fueled district energy system has been a job creator. In the wake of the 1970s Arab oil embargo, Växjö became the first city in Sweden to start replacing fossil fuels with wood waste.

“That created jobs within the forest industry, within the transport industry,” Växjö’s business support manager, Johan Thorsell, said in an interview in October. “It’s created a lot of jobs locally, and we’re not sending off money to the Arab world.”

Thorsell said he and his colleagues in Växjö have been in close contact with Duluth officials and they hope to find a way to collaborate on the steam plant conversion.

Ever-Green Energy presented the plan to Duluth City Council members, but no action was expected Monday.

One of the next steps will be finding a funding source for the improvements. Montgomery said the city is exploring a couple of different options. It’s started a process to convert customers to longer term contract, which would give it a revenue stream it could bond against. It’s also seeking state and federal grants for district energy demonstration projects that might help cover some of the costs.

“We just think the opportunities are tremendous, but it’s going to need a lot of partnerships, a lot of collaborations, but a lot of people are interested right now,” Montgomery said. “We’re just trying to put all the pieces together.”