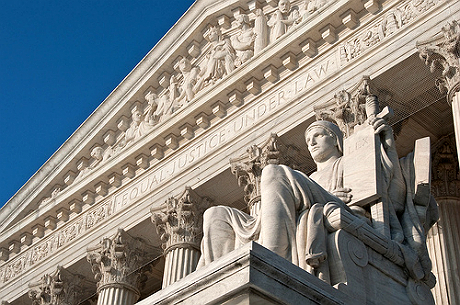 U.S. EPA pressed the Supreme Court Tuesday to uphold its effort to curb air pollution that drifts from one state to another.

At issue is the 2011 Cross-State Air Pollution Rule, or CSAPR, a regulatory regime for 28 Eastern and Midwest states tossed out last year by a federal appeals court after challenges from industry and some states.

EPA maintains it reasonably interpreted the phrase “contribute significantly” in the Clean Air Act’s “good neighbor” provision, which gives the federal government authority to regulate cross-state emissions. The term is vague, the agency says, and may take into account several factors — including cost and feasibility — in decisions on which states must stem emissions and by how much.

Deputy Solicitor General Malcolm Stewart compared EPA’s situation to that of a basketball coach whose team lost 101-100. Asked after the game which shot “significantly” contributed to the loss, Stewart said, the coach could point to any attempt — including a midgame layup or a last-second half-court heave.

Similarly, he said, EPA may choose which states and which power plants “significantly” contribute to neighboring states’ pollution.

Stewart said there are “various reasons to think EPA reasonably construed that term.”

Justice Elena Kagan appeared to agree, taking issue with industry’s argument that EPA may not consider cost. She asked whether Congress gave any intention in the “good neighbor” provision that the regulations “should occur in a fundamentally silly way.”

“No one,” Stewart answered, “has identified a concrete alternative” to considering cost.

Air pollution originating in the Midwest has long plagued Eastern states. EPA has sought to address the issue since 1998. The statute allows EPA to regulate a state’s pollutants that “contribute significantly” to violations of air standards in its neighbors for ozone-forming contaminants sulfur dioxide and nitrogen oxide and fine particles, or soot.

In 2005, the George W. Bush administration issued the Clean Air Interstate Rule, or CAIR. But public health groups challenged the program, and the U.S. Court of Appeals for the District of Columbia Circuit threw it out, holding that it didn’t do enough to protect public health.

Responding to that ruling, EPA in July 2011 finalized CSAPR. The program would take major steps to reduce nitrogen oxide and sulfur dioxide emissions by requiring the installation of pollution controls.

EPA estimates the rule would prevent 34,000 premature deaths per year and yield up to $280 billion in annual health benefits.

Industry and several states quickly challenged the program, largely arguing that EPA had overstepped authority granted by the Clean Air Act and criticizing the costs associated with the pollution reductions.

The D.C. Circuit agreed and tossed EPA’s program in August 2012. In a 2-1 ruling and opinion from conservative Judge Brett Kavanaugh, the court held that CSAPR could conceivably require a downwind state to reduce its emissions by a greater amount than its “significant contribution” to its neighbor’s pollution (Greenwire, Aug. 21, 2012).

Peter Keisler of Sidley Austin LLP, representing industry groups, argued that the intent of the “good neighbor” provision focuses on the “effects” of a state’s emissions on its neighbor’s pollution levels.

CSAPR’s reliance on cost, he said, would mean “states making only a slight contribution” to neighboring pollution would be required to make large reductions because EPA determines it is more feasible — based on cost — then another contributor.

Cost, Keisler said, “is the entire driver” of EPA’s program.

But Keisler may face an uphill battle in winning a majority of the court. With Justice Samuel Alito recusing himself, the court’s liberal four justices appeared sympathetic to EPA’s arguments, and there appeared to be some division among the four conservatives.

However, if the court split 4-4, the D.C. Circuit opinion would be left in place and EPA would have to start over.

The focus in Tuesday’s arguments was Justice Anthony Kennedy, the court’s usual swing vote, and he appeared receptive to at least some of EPA’s points.

He took issue with Keisler’s definition of “significant” and seemed to be open to EPA considering feasibility.

“Can’t you say that the contribution is more significant than the other?” he asked.

But the conservative justices took issue with EPA on other points.

In particular, they criticized EPA for skipping to federal implementation plans, or FIPs, instead of letting states devise their own plans to comply with the standards. Moreover, EPA jumped to FIPs before it had told states what emissions limits they needed to meet.

There was “no possible way for states to know” what emissions limits they were supposed to meet, Roberts said.

But Stewart countered that the same concept applies in reverse because downwind states must try to ascertain how much out-of-state emissions are affecting their in-state levels without knowing exactly how much is coming into their borders.

Scalia and Roberts’ hypothetical, he said, is the “flip side of what downwind states have to do all of the time.”