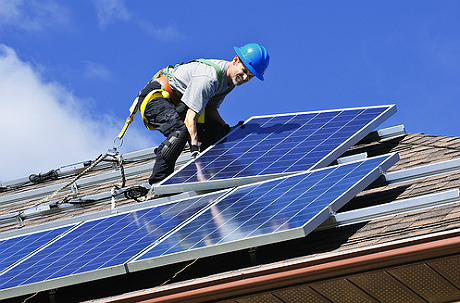 A two-year legal dispute over a solar installation in a St. Louis suburb has prompted the latest legislative effort to clarify the rights of homeowners to go solar.

Frances and James Babb, facing roadblocks from city officials in Clarkson Valley, Missouri, prevailed on Nov. 26 when the Missouri Court of Appeals upheld a 2012 judgment in a case brought by the Babbs and the Missouri Solar Energy Industries Association.

The court ruled that while cities may impose some parameters on the installation of solar panels, they cannot prohibit it or make it effectively impossible.

The Babbs, seeking legislative action as well, took their issue to a Missouri state senator. On Dec. 2, Sen. Jason Holsman introduced SB 579, which would permit homeowners associations to impose “reasonable rules and regulations,” but prohibit them from expressly or effectively outlawing the installation of solar panels by homeowners.

Solar panels in residential neighborhoods are a common source of conflict. Since the ruling was announced, Frances Babb said, “A lot of people have called me, not only in Missouri, but beyond.” Babb heard tales of similar issues from people in several communities across Missouri, as well as from Louisiana, Georgia and Washington state.

About two dozen states now have so-called “solar rights” laws. In Wisconsin, neither municipalities nor homeowner associations can prevent property owners from putting up panels, although they can impose some restrictions on them. A law in Illinois prevents restrictions by homeowner associations. In Iowa, municipalities have the right to issue ordinances prohibiting subdivisions from restricting the installation of solar panels.

In Missouri, Sen. Holsman is making his second effort at a solar rights law. He introduced a bill in the 2013 legislative session that never got to the floor for a vote, due largely to opposition from the state’s homeowners associations, he said.

Holsman has accepted some modifications suggested by representatives for the homeowners associations, and said he is hopeful that his bill will get farther this year.

“I think we have a solution to that problem,” Holsman said.

Frances said that while Holsman’s bill regarding homeowner association standards is “a good start,” it fails to address municipal regulations regarding solar panels.

‘We want to have a nice house’

It was just over two years ago that the Babbs filed the routine paperwork with their neighborhood association and with the city of Clarkson Valley to install solar panels. Because their house is “chock full of electrical toys” belonging to James, an electrical engineer, the couple uses a lot of electricity. They decided to try to generate some of that power themselves.

There didn’t seem to be any obstacles in the way of their getting them, according to Frances Babb. She said she consulted with the other homeowners on the street, and got no resistance. The city codes at the time didn’t have anything to say about solar panels. And when the Babbs sought approval from their homeowners association, they got it in writing, according to Frances.

However, because its codes did not address solar panels, the city of Clarkson Valley decided it should investigate the matter, according to Mayor Scott Douglass. The day the Babbs filed for a building permit, the city imposed a moratorium on solar installations. In January 2012 it passed ordinances regulating solar panels, and requiring a special-use permit rather than a standard building code.

The Babbs applied for a special-use permit and the board of aldermen denied it in March. In April, the Babbs filed a lawsuit.

In June 2012 they won in the circuit court, and a few months later they put up their solar panels – 52 on the roof of their house, and 48 on poles in their secluded back yard.

‘We’re not against solar’

Although the board of aldermen didn’t offer an explanation for denying the Babbs a special-use permit, Mayor Douglass said it was based on concerns about a possible fire hazard, as well as the aesthetic ramifications of 100 solar panels on a residential lot – even the Babbs’ lot of nearly 5 acres.

“That’s a lot of panels,” he said, pointing out that St. Louis’ Busch Stadium has only slightly more, with a total of 106 panels.

The court ruling means the Babbs now can keep their panels, which Frances said generate 80 to 90 percent of their power, and Clarkson Valley can keep its ordinance for now.

And more panels are on the way. Now that the path has been laid, a second Clarkson Valley resident just got the nod from the board of aldermen to install solar panels.

Mayor Douglass said the city just wants the projects “to fit into the neighborhood, and says the Babbs aren’t the first Clarkson Valley residents to install solar panels.

“We’re not against solar,” he said. “But there are conditions that ought to be adhered to.”