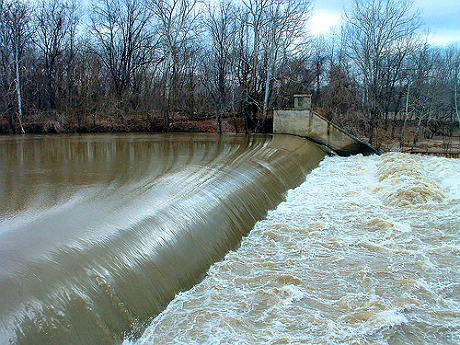 The Williams Dam in Indiana will soon be producing power again. (Photo by Cindy Cornett Seigle via Creative Commons)

Century-old dusky photos show the herculean effort made to construct the Williams Dam on the White River in southern Indiana.

The building of scaffolds, the digging of pits, the pouring of concrete, created an impressive structure that began to take shape in 1910, was swamped by floodwaters in 1913 and generated electricity until the turbines were shut down in the 1950s.

Now the Boston company Free Flow Power says it is close to reopening a hydropower plant at the dam, part of a nascent resurgence of hydropower in the Midwest.

The overhaul will cost about $12 million and be capable of generating 4 MW, the company says. The plant would sell power through long-term purchase agreements or on the wholesale market, said Free Flow vice president Tom Feldman.

Feldman said the plant’s power could be competitive with the power sold from nuclear and natural gas plants in the region, and it could help Indiana or other states meet their renewable energy standards since hydropower qualifies as a renewable energy source.

The price of electricity generated at the Williams dam “would not be a significant premium compared to the current wholesale market,” Feldman said.

“There’s going to be a change between the prevailing wholesale price for power now and in 2016. The key takeaway from our perspective and what we’ve heard from other entities is that hydropower is cost-competitive,” he said. “In the grand scheme of things it is a small part of the energy mix – it’s not going to displace coal or natural gas – so we’re looking to identify sites where hydropower can be a component of the energy mix.”

The restarted hydropower plant will be a “run-of-river” operation, meaning that they won’t change the amount of water pooled above the dam but will go with the flow that will vary depending on season and weather. The unpredictability of varying flows is not an ideal situation for power distribution and sale – solar and wind face similar challenges. But Feldman said that based on 30 years of flow data measured on site at the dam, the company is able to offer dependable estimates to potential electricity buyers and investors.

Bolstering hydropower could be a growing trend in the Midwest, where hydropower makes up just a fraction of the regional power supply – from a tenth of a percent in Illinois to about three percent in Wisconsin, according to the National Hydropower Association.

Feldman said there are 80,000 dams nationwide that are not generating electricity but in many cases could be. Most are owned by state governments or the Army Corps of Engineers.

The Williams dam, which is owned by the Indiana Department of Natural Resources, is the furthest along of about 50 government-owned dams where Free Flow is looking to install hydropower operations. The 20 other projects they consider in advanced stages of development include six on the Muskingum River in Ohio.

“There’s a tremendous untapped existing resource out there – what Free Flow is trying to do is make beneficial use of existing infrastructure with minimal impact on the community,” said Feldman.

He said the company has been working with neighbors and other stakeholders for several years to hear and address concerns. He added that Free Flow is trying to create a “win-win situation” in part by building a new ADA-compliant fishing platform above the dam, which is already a popular fishing spot – even hosting events for the Indiana Catfish Association. The company says the new plant will create 25 construction jobs and two highly-skilled permanent jobs.

Free Flow expects to get their license from the Federal Energy Regulatory Commission (FERC) in early 2014, after about three years working with the commission on licensing issues. They hope to secure power purchase agreements and start operation by mid-2016. The department of natural resources will continue to own the actual dam, and through a lease arrangement Free Flow will own and operate the hydropower plant.

Feldman said the company is hoping to enter a bilateral purchase agreement where one entity buys power from the dam — an ideal candidate would be the Crane Naval Base nearby. Selling to utilities or rural electric cooperatives — in or out of the state — would also be possible. Feldman said they much prefer to deal with in-state customers.

“We are committed to seeing this through to commercial operation,” said Feldman. “And looking forward to working with IDNR to execute a lease agreement that ensures there’s hydropower producing emission free electricity for generations.”