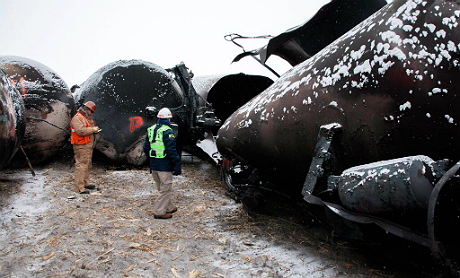 On December 30, a BNSF Railway train hauling grain near Casselton, North Dakota, slipped off the rails and blocked a neighboring track.

A short time later, a crude oil train going the opposite way struck the derailed cars, with explosive results. Several oil tank cars burst into flames, causing no injuries but spurring many nearby residents to evacuate until New Year’s Eve as a precaution.

The disaster marked the third high-profile oil train explosion in the past six months and has reignited a debate over the relative safety of rail and pipeline transport.

The derailment also brought a quick response from the Pipeline and Hazardous Materials Safety Administration, which warned Thursday that crude from North Dakota’s Bakken Shale “may be more flammable” than other oil types (E&ENews PM, Jan. 2).

PHMSA and the Federal Railroad Administration have stepped up inspections of North Dakota crude ever since a train carrying Bakken oil derailed and exploded in Lac-Mégantic, Quebec, this past July, killing 47 people and leveling the town center in an oil-fueled inferno (EnergyWire, July 17, 2013).

By contrast, investigators reported that the derailment about a mile west of Casselton was largely cleaned up within hours. Regular traffic along BNSF’s eastbound line had resumed as of Thursday morning, spokeswoman Amy McBeth confirmed.

Edward McConnell, Casselton’s mayor, said the uncomfortably close crash served as a “wake-up call” for the community. He called for tighter regulations on crude-by-rail movements in an interview Friday but also said he hopes new pipelines can take some tank cars off the tracks.

“Environmentalists are complaining that pipelines are dangerous to the environment, but if you’re going to wreck some land, it’s not as bad as blowing up a town,” he said.

Federal officials and industry groups point out that the overwhelming majority — more than 99.9 percent, they say — of crude-by-rail shipments reach their destination safely.

Rail proponents have clashed with pipeline advocates over which method is safer. Federal data show that pipeline leaks are much larger on average but that railways spill oil more frequently on a per-barrel-mile basis (EnergyWire, July 17, 2013). The Association of American Railroads writes this off as a function of tougher reporting requirements for crude-by-rail spills. (Pipeline companies typically only have to start counting if a spill exceeds 5 gallons.)

The stakes are highest for railroads in North Dakota, where the shale oil and gas boom has caused crude production to swamp existing pipeline capacity. (The landlocked state can’t fall back on seaborne oil tankers, either.)

Lynn Helms, director of the North Dakota Department of Mineral Resources, predicted that as much as 90 percent of crude produced in the Bakken this year will move by rail (EnergyWire, Dec. 16, 2013).

Ron Ness, president of the North Dakota Petroleum Council, said between 60 and 70 percent of the state’s crude deliveries are currently moved by freight railroads but that the figure “swings widely.”

That’s because much of the oil leaving North Dakota is still bought and sold by traders squeezing profits out of the gap between Bakken oil prices and costlier Brent-linked coastal crude brought in from the Middle East or elsewhere.

“Moving oil and commodities by pipeline is still the safest, most reliable and consistent system possible,” he said. “I’m confident that there are going to be more and more pipelines in place reaching better and better markets.”

He said his group would track the National Transportation Safety Board’s investigation into the Casselton derailment carefully but noted that in all forms of crude transport, “nothing comes with a risk-free guarantee.”

Transportation analysts doubt whether the pipeline-versus-train debate will do much to slow bullish oil-by-rail market trends.

Anthony Hatch, principal of ABH Consulting, a New York-based freight transportation research firm, said that while he was “concerned” about the volatility of Bakken crude and the recent Casselton derailment, “the anecdotal evidence should not overwhelm the actual evidence of rail safety in terms of spills.”

Some may air their preference for pipelines in North Dakota, he said, but ultimately, “somebody’s got to decide to put capital in there and build that.”

And with dozens of crude producers and coastal refiners committing to multiyear contracts to ship light, “sweet” Bakken crude by rail, it’s unclear if the appetite for pipelines is big enough to get them off the ground quickly in North Dakota.

Analysts at Credit Suisse wrote in November that many oil shippers favor rail for its “absence of long construction periods and regulatory approval when compared with pipeline movement.”

However, Hatch noted that ongoing investigations into the Lac-Mégantic and Casselton crashes could shake up the business with their findings.

“If you find this is an explosive material, that does change the debate,” he said, noting that safety still “plays a big part” in railways’ economic decisions.

Getting the word out

The Lac-Mégantic tragedy prompted PHMSA and the Federal Railroad Administration to test more North Dakota crude through an initiative they called the “Bakken Blitz” after investigators raised concerns that the oil in the ill-fated train had been categorized in the wrong safety group (EnergyWire, Sept. 12, 2013).

The National Transportation Safety Board has said it is examining whether the oil in last week’s North Dakota derailment was classified properly. The preliminary investigation showed it was labeled as a Class 3, Packing Group I hazardous material.

Mulling the finer points of rail-bound crude’s properties may have once been the domain of a few chemists.

But with crude-by-rail shipments rising from less than 5,000 carloads in 2006 to an estimated 400,000 last year, environmentalists and local governments are calling for more transparency.

“One of the real concerns, I think, for all the members of the public is how few places there are for public input or even just public information,” said Kristen Boyles, a Seattle-based attorney with the green law group Earthjustice. “We really need some sort of federal response. Otherwise, it falls to individual municipalities and localities trying to regulate, organize and find out what’s happening on the railroads.”

“We had to ascertain for ourselves what was coming through town; there wasn’t anybody who told us,” he said. “Things need to change.”

She said the North Dakota explosion prompted PHMSA “to remind the transportation community to make sure that they’re taking the right precautions.”

“For us, when you have unfortunate incidents, it’s important to get the word out,” she said.

Edward Hamberger, AAR’s president and CEO, said last week that it is “critical that railroad employees and community emergency personnel know how to handle or respond in the event of an accident.”

But even with industry and regulators outwardly agreeing on a spate of proposed rules, experts say the topic of rail safety won’t shrink away, as North American crude output grows from Texas to Alberta. There is a manufacturing backlog of about 60,000 oil tank cars slated for delivery through 2015.

Jason Bordoff, director of Columbia University’s Center on Global Energy Policy and a former top White House energy adviser, said in an email that crude-by-rail issues “will continue to arise and should be addressed by regulators.”

“While we have been fortunate in the U.S. that recent derailments of crude oil shipments have not occurred in populated areas — unlike the tragic accident in Lac-Mégantic, Canada — many of these trains pass through the centers of towns and cities all across the country,” he said.