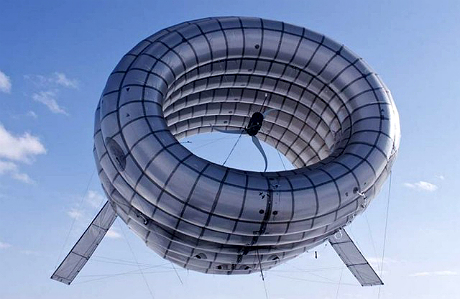 Airborne wind turbines are a relatively new concept in which devices resembling blimps or gliders generate electricity as they are flown like kites in the lower atmosphere.

They’ve yet to get off the ground beyond a few test runs, but it’s conceivable that in the not-too-distant future developers will be scouting sites to deploy them.

University of Delaware wind power researcher Cristina Archer says they’d be wise to consider the Midwest, but for a characteristic that can limit ground-based turbines.

Archer recently mapped the presence of something called “wind speed maxima,” strong currents of wind that resemble the jet stream but occur at much lower altitudes.

“They are much more common than we thought before. We were so suprised,” Archer said.

Wind speed maxima exist above about a third of the planet, mostly in the tropics and largely over water. Archer’s maps also show a large thumb extending over the Great Plains.

“The Midwest sticks out like a bullseye as a fantastic opportunity to generate electricity from these maxima in the summer,” Archer said. “It’s such an amazing potential, especially for the U.S.”

Other notable areas of wind speed maxima concentration are along the coast of California and offshore of the horn of Africa.

A type of wind speed maxima known as low-level jets is a well-known enemy of ground-based wind turbines because of the extreme turbulence they can cause when they clip the top of blades.

“Low-level jets are the nightmare of the traditional wind industry,” Archer said. When slower-moving turbine blades hit these strong jets, the result is a huge amount of shear and stress.

Airborne wind turbines won’t have this problem because they can be raised or lowered to avoid this type of turbulence. They can also be reeled in during thunderstorms or severe weather.

The airborne wind turbine concept has been floating around since at least the 1990s, but activity has acclerated in the past five years with at least 20 startup companies working on various concepts.

One of the leaders of the pack, Makani Power, was acquired by Google in May. More than 200 people from 21 countries attended an airborne wind energy conference in Berlin in September.

Some of the designs feature rotating blades while others propose to make electricity by continually reeling in and out of a tether to turn a ground-mounted generator.

The potential advantages include lower costs, since they don’t require as much material to build, as well as the ability to tap stronger, steadier high-altitude winds.

Some initially assumed the devices would have to reach the jet stream, 10 kilometers above the ground, which would require very long and heavy tethering cables, but Archer’s paper concludes otherwise.

“Our proposal in this paper is that you don’t need to go all the way up to 10 kilometers to reach the jet, because in more places than you might think there are these wind speed maxima that resemble the jet stream but are at a much, much lower altitude,” she said.

Archer’s research will be published in the April 2014 issue of the journal Renewable Energy and is available online now.