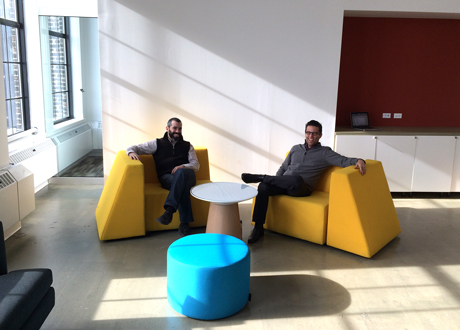 David Rotbard, left, of Coalition and Jeremy Adelman of the Energy Foundry break in a new co-working space in Chicago.

Look out the east side windows from the 12th floor of the historic Gage building in downtown Chicago, and you see Millennium Park and the glittering expanse of Lake Michigan.

Paradoxically, the view from the west side is also the lake’s blue waters. It throws the viewer for a loop, until you realize that you’re seeing the lake reflected in a neighboring sleek glass building.

This unexpected touch seems to symbolize the sense of unfettered possibility and imagination that developers are going for with this freshly painted orange and aqua space, that they hope will become a hive of entrepreneurship and innovation on the clean energy front.

It’s a former hat factory turned co-working space complete with minimalist offices and retro phone booths — lacking seats so that no one will linger inside too long. It’s meant to be something like 1871, Chicago’s hotshot digital co-working space and startup incubator.

The new co-working space will soon be home to about a dozen cleantech and clean energy organizations and startups, including the Cleantech Open, an accelerator that helps launch companies through mentoring, summits and competitions.

An anchor tenant is the Energy Foundry, an impact venture capital fund that invests $50,000 to $1.5 million in grid modernization and clean energy startups. Initial funding for Energy Foundry came from ComEd and Ameren Illinois, under the state’s smart-grid legislation, the Illinois Energy Infrastructure Modernization Act. Two senior executives from ComEd will have an office in the co-working space to work with startups and to scout innovative grid related technologies.

This spot is among the burgeoning efforts in Chicago and other major cities to drum up more venture capital in a sector that has traditionally relied heavily on government funding. And that means, more generally, trying to make often complicated or prosaic clean energy technologies exciting and accessible to a wider range of investors.

The goal is to create the kind of “wave of exuberance” that the New York Times recently attributed to solar companies with social media star power, attracting investment far beyond their still-unproven returns.

“If you have people with things in common sitting by each other you tend to have serendipity – companies, universities, customers, investors are all talking,” said Energy Foundry vice president Jeremy Adelman, who added that the co-working space known as “Coalition: Energy” will host its grand opening likely in February and will ultimately house a total of about 100 people working on clean energy and smart grid projects.

Given the meteoric success of operations like Facebook, YouTube, Twitter and Foursquare, it can be easy for the founders of such companies to build excitement about becoming the next big thing. But for companies that specialize in aspects of clean energy – from battery components to smart meters to solar panel materials – it can be much harder to attract venture capital or even interest from investors who don’t have significant background in the sector.

For one thing, internet- and mobile phone-based startups are “capital-light,” as Adelman noted. “You can build a website in your garage and soon you’re selling it for $3 billion.”

For hardware-based products essential to cleantech sectors, there is much more involved, from actually fabricating physical components to assembling and testing them. The difference in the sectors may have contributed to a drop in clean technology investment over the past few years, after a burst of initial excitement.

“Green had become really sexy…Silicon Valley people were thinking, ‘Wow there’s an opportunity here,’” said Adelman. “But they look at everything like a web business, so their investments weren’t as successful as some had hoped. They were using the wrong lens. There was some feeling that it left a bad taste in their mouth – they expected better returns sooner.”

“How do you solve issues for companies that are building things?” added Justin Kaster, executive director for the Midwest Cleantech Open. “They need more capital and have a longer gestation period and time frame. They may not fit VC models…A lot of generalists (investors) have gone through a stage of focusing less on hardware.”

Sheeraz Haji, CEO of the Silicon Valley-based Cleantech Group, said there are “significant declines from pre-crisis peaks” in cleantech investment. “We’ve seen significant shifts to ‘capital light investing’ – people investing in sectors based on software, where you can build a company with less capital.”

For social media and IT applications, the question is often not so much functionality but popularity. Clean energy-related hardware, by contrast, does not speak to the general public so much, but needs to show that it actually works well.

So while investors might take a chance on a social media product that is little more than an idea, with hardware they want proven results.

Kaster said this is one front where the Cleantech Open aims to help, by facilitating partnerships between startups and major companies, including around test runs or pilot projects. That gives the startup some evidence of performance and the credibility earned by working with a major company.

“You go to a financially driven investor and they want to know, does it work?” said Kaster. “Without data proving that, it can be difficult. So we’re looking at how to be supportive in development of data, helping emerging startups use their resources efficiently.

“We help entrepreneurs go out to market and get a lot of feedback: Would you buy it? What would you pay for it? Indirectly you’re establishing a relationship with those folks. VCs see you’re working with 3M or ComEd or Ameren –and that’s a distinction.”

The Energy Foundry provides support along these lines too, assisting entrepreneurs with strategic partnerships, applying for government funding, testing opportunities, marketing and other aspects of getting a business off the ground.

Backers of clean energy technology hope things like the new Chicago co-working space are part of an evolution, or even overhaul, of the image of clean technology companies – to make them more enticing to the type of investors who flock so enthusiastically to digital or social media startups.

It may become easier for cleantech companies to seem exciting and attract investment as the general public becomes more aware of the nuts and bolts of energy efficiency and clean energy.

Adelman and Energy Foundry CEO and managing director Jason Blumberg point to the company Nest as an inspiration. Nest produces smart thermostats that can self-program and be programmed from a smartphone to adjust to the nuances of one’s schedule, resulting in potentially significant energy savings.

Typically it’s hard to sell people on the idea that, “we’re making a really cool light switch,” Adelman said. But Nest was, he said, “successful in creating buzz around a God-awfully boring product – it’s a thermostat!”

“Cleantech” is generally understood to include a wide range of industries and sectors with the potential to deliver cleaner energy, transportation, waste management and the like. Energy – including fuel and electric power generation — and energy efficiency make up a significant part of the cleantech ecosystem, as illustrated in a taxonomy created by the Cleantech Group.

While many cleantech companies deal in hardware, others are identified as “cleanweb” players — making software and information technology deployed in the service of clean energy development, increased efficiency and energy-use data monitoring.

The cleanweb sector may help provide a bridge for the buzz that surrounds information technology in places like Silicon Valley, Chicago and New York City, to bring investors into the thornier realm of cleantech hardware.

At the Cleantech Open’s “Cleanweb and the City” forum in New York in November, participants discussed how the cleantech sector can build on that city’s thriving IT scene.

Clean energy startups have surely gained a much higher profile thanks to the pageant-style competitions hosted by the Cleantech Open, the Clean Energy Challenge run by the Clean Energy Trust in Chicago, and other similar operations. These accelerators provide mentoring and other support to startups, with high-profile competitions that provide cash awards for company development along with showcasing the startups for investors.

In November the Environmental Law & Policy Center (ELPC) hosted a “solar hack” at the Illinois Institute of Technology, with the idea of bringing together designers and programmers with solar companies and cleantech entrepreneurs, in a friendly and relationship-building competition.

The event yielded the nascent business Team Smart Card, a concept involving a web application where companies can compete to see how green their operations are and also get information on available solar technologies. That team goes on to compete in Chicago’s Cleanweb Challenge, along with winners from similar events hosted by groups including World Business Chicago and the Center for Neighborhood Technology.

Haji said that current challenges aside, he sees a very bright future for cleantech investment and innovation.

“There’s an aspect of ‘change the world,’ and there’s also the fact that there are massive markets that are undergoing quite significant disruption,” he said. “I do expect we’ll see a crop of amazing financial success stories over the next year or two.”