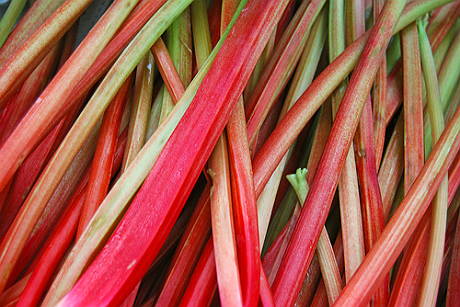 Harvard researchers have developed a battery based on an organic molecule nearly identical to one found in rhubarb. (Photo by Alice Henneman via Creative Commons)

Researchers at Harvard University have demonstrated a low-cost battery that can be scaled to provide backup power for anything from large wind farms to a home with solar panels.

The team discovered that quinone — a metal-free, abundant organic molecule — can provide low-cost material to hold the electric charge for a flow battery, which stores energy in a fluid rather than a solid state. Quinones are organic molecules that plants and animals use to store energy and are abundant in crude oil and green plants, according to the team.

Utilities are eagerly seeking low-cost storage that is large enough to provide power when the wind doesn’t blow and sun doesn’t shine to help balance the grid as it comes to rely on more and more renewable energy. California introduced an energy storage mandate last fall that will require its three utilities to buy 1.325 gigawatts of storage by 2020 (E&ENews PM, Oct. 17, 2013).

Flow batteries hold great promise to provide multiple days of backup power for intermittent wind and solar power because their storage capacity is determined by the amount of chemical fluids in an external tank rather than within the power conversion portion of a battery.

While flow battery technology is currently available, it relies on expensive metals like vanadium and platinum that make the cost of electricity storage too high to be competitive in the market.

The team’s new technology already performs as well as vanadium flow batteries, the most advanced commercially available technology now in development, according to Harvard.

Through high-throughput quantum chemistry or “virtual screening,” the Harvard team quickly sifted through more than 10,000 quinone molecules to identify the best candidate for its technology, which is almost identical to one found in rhubarb.

“The whole world of electricity storage has been using metal ions in various charge states, but there is a limited number that you can put into solution and use to store energy, and none of them can economically store massive amounts of renewable energy,” Roy Gordon, a lead on the project and a professor of chemistry and materials science at the Harvard School of Engineering and Applied Sciences, said in a statement.

“With organic molecules, we introduce a vast new set of possibilities. Some of them will be terrible and some will be really good. With these quinones, we have the first ones that look really good,” Gordon added.

The team’s findings were published Thursday in the journal Nature.

The Energy Department’s Advanced Research Projects Agency-Energy (ARPA-E) provided $590,000 to the team in 2012 as part of 66 projects selected for its second open funding opportunity. The team is in negotiations with DOE for an additional three years of funding to further test the technology and deploy a trailer-sized unit to provide a larger demonstration, such as with solar panels on the roof of a commercial building, according to Connecticut-based Sustainable Innovations LLC, a collaborator on the project.

“The Harvard team’s results published in Nature demonstrate an early yet important technical achievement that could be critical in furthering the development of grid-scale batteries,” ARPA-E Program Director John Lemmon said in a statement. “The project team’s result is an excellent example of how a small amount of catalytic funding from ARPA-E can help build the foundation to hopefully turn scientific discoveries into low-cost, early-stage energy technologies.”

Additional tests and work should achieve significant improvements, according to the team leader, Michael Aziz, a professor of materials and energy technologies at the Harvard School of Engineering and Applied Sciences.

“I think the chemistry we have right now might be the best that’s out there for stationary storage and quite possibly cheap enough to make it in the marketplace,” he said in a statement. “But we have ideas that could lead to huge improvements.”