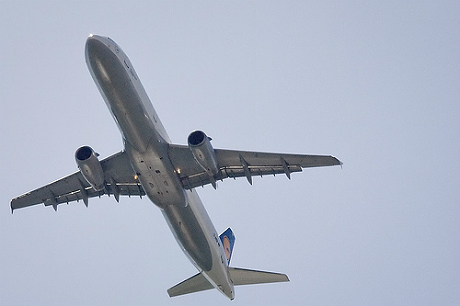 If you traveled by air over the holidays, you may have landed with a bit of green guilt.

Conventional wisdom says that driving a relatively fuel-efficient car is usually better for the environment than flying.

That may no longer be the case, though, according to new calculations from the University of Michigan’s Transportation Research Institute.

Over the last four decades, driving has steadily lost the fuel-efficiency edge it once held over flying. In 1970, the per-passenger-mile fuel intensity for flying was twice that of an average car trip.

“That is no longer the case for the average vehicle,” says Michael Sivak, director of Michigan’s sustainable transportation program, which produces a monthly “eco-driving” index of greenhouse emissions from U.S. drivers.

In fact, matching the fuel intensity of an average flight now requires a car get at least 33.8 mpg or have more than two occupants, according to to Sivak’s latest paper, “Making Driving Less Energy Intensive Than Flying.”

Since 1970, the fuel intensity of both driving and flying have decreased, but air travel has seen far greater efficiency gains — a 74 percent decrease in BTUs per passenger mile compared to 17 percent for driving.

Airplane manufacturers have made incremental gains in fuel efficiency since the ’70s, and airlines are also packing more passengers onto each flight by squeezing leg room and leaving fewer empty seats.

Sivak identified the year 2000 as the point at which the average flight became more fuel-efficient than the average car trip.

That said, travelers can still find greener ways to travel than flying.

One mode of transportation whose energy-efficiency won’t be matched by airlines anytime soon is rail. Amtrak’s BTU per passenger mile in 2010 was about 40 percent lower than an average airline passenger mile.

And of course, drivers can also beat the averages with more-efficient cars or more occupants.

The U.S. Department of Energy’s FuelEconomy.gov Web site lists 228 vehicles for 2014 that get at least 34 mpg highway, including 159 conventional gasoline vehicles. These vehicles make up just a small slice of the nation’s fleet, though, and boosting the average fuel efficiency to that level — a 57 percent improvement — is a “daunting task,” Sivak writes in his paper.

Another way to beat the fuel-economy of flying is to carpool. In an average vehicle that gets 21.5 mpg, occupancy needs to average 2.3 persons to match an airliner, Sivak concludes.