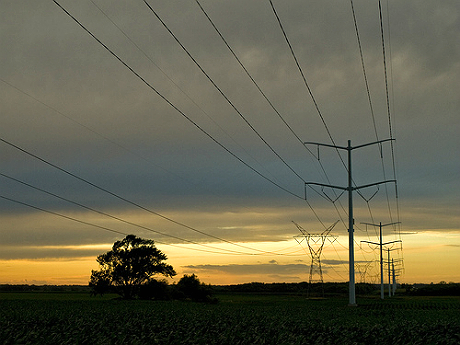 A new media analysis offers transmission line developers several suggestions to ease the friction they commonly encounter with communities in their path.

“We just kept seeing the same reoccurring themes over and over and over,” said Johnathan Hladik, the center’s senior policy advocate on energy issues.

In general, people worry how projects will affect agriculture, health and the environment. They have questions about the need for transmission projects, and they have fears about the use of eminent domain and whether they’ll be treated fairly in the event that a project needs to take their land.

Opposition related to all of these issues appears to be made worse by misinformation or a lack of information.

“Communication is the absolute most important thing,” said Lu Nelsen, author of the report, From the Ground Up: Addressing Key Community Concerns in Clean Energy Transmission. “In most cases, [developers] spend too much time trying to catch up.”

The Center for Rural Affairs is a member of RE-AMP, which also publishes Midwest Energy News.

Opportunities to reach out

A historic transmission build-out is underway in the Midwest in an effort to help the nation’s aging electricity grid catch up to 21st century demands. As the frequency of outages grows, so does the need for new “green energy superhighways” to deliver wind power to cities from more sparsely populated rural areas.

With transmission bottlenecks being a key impediment to wind power’s growth, the report says it is critical for developers to address communities’ concerns.

The report’s recommendations include hosting more open houses, having a better online presence, and allowing more collaboration on routing decisions.

Some good news for developers: landowners and communities in the path of transmission projects often start out neutral or skeptical, but not reflexively opposed to projects. Instead, they tend to raise questions and concerns early on and wait for answers before taking a position.

It’s when these questions and concerns aren’t adequately addressed that views can harden against a project, the report suggests.

“One of the easiest recommendations for developers to implement is to increase the frequency of open houses and public meetings,” it says.

The report says that many developers treat open houses as an obligation rather than a chance to understand and address community concerns. It recommends earlier and more frequent open houses, as well as continued outreach after the meetings are held.

Improving websites with user-friendly designs and up-to-date information is another easy step for developers to improve communication, the report says. It cites the interactive page for a project in South Dakota by Otter Tail Power and Xcel Energy as an example.

The report says developers could prepare fact sheets that anticipate and address concerns that community members are likely to raise.

They could also encourage more collaboration on project route and design. The report recommends that developers work with government, communities, landowners, and advocacy groups to identify environmentally sensitive or other significant areas that should be avoided for conservation reasons.

While there is no scientific link between transmission lines and human or animal health, the fears persist, nonetheless. The report suggests that developers mitigate those unproven worries by keeping lines as far away from residences as possible.

When concerns arise about agricultural land being taken out of production, developers could offer changes such as using monopoles, which have a smaller footprint, when crossing farm land.

And transmission companies could alleviate eminent domain and fairness fears by providing more information about how the easement process works, including publicly posting standardized easement agreements showing the terms that landowners can expect.

“Increasing the transparency of negotiations for land and demystifying the contracts used to acquire easements would go a long way in making landowners feel more empowered,” the report says.

Transmission developers may also need to consider alternative payment models, such as annual payments, in order to make landowners feel they have a stake in projects:

“The future of our transmission grid depends on innovation — not just technological, but also in the way that developers interact with communities involved.”