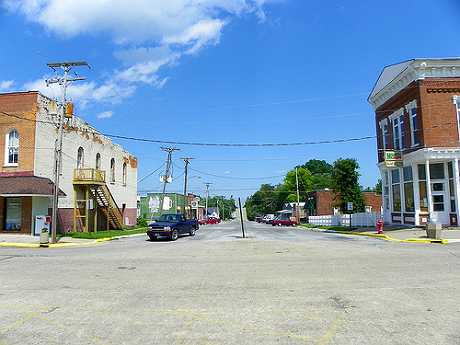 Main Street in Vienna, Johnson County, Illinois where voters will decide on an anti-fracking ballot measure this spring. (Photo by J. Stephen Conn via Creative Commons)

“Shall the people’s right to local self-government be asserted by Johnson County to ban corporate fracking as a violation of their rights to health, safety and a clean environment?”

The question, which will show up on the March primary ballot in the southern Illinois county, is an example of an increasingly popular tactic among fracking opponents: trying to assert local control over a practice that in most cases is not specifically addressed by federal or state laws.

The move is especially significant in Illinois, where state regulators are refining fracking rules that critics say are way too lenient.

On December 3, the Illinois Department of Natural Resources closed its 50-day public comment period on the proposed state regulations. The agency received more than 20,000 comments, the bulk of them reportedly opposed to the regulations or to fracking as a whole.

“People recognized that (the state regulations were) not an act representative of the rule of the people in many parts of the state,” said Natalie Long, a downstate Illinois resident who works for the Pennsylvania-based Community Environmental Legal Defense Fund. “The issue we’re looking at is not just fracking or no fracking, it’s a rights issue. Who decides who gets fracked? The people themselves who live with the consequences or somebody else who’s making that decision for them?”

Johnson County residents opposed to fracking are hoping their three-member county commission will ban the practice. Last year they asked the commissioners to place a fracking-related referendum on the ballot. The commissioners declined to use their power to do so and instead suggested residents collect the 374 valid signatures required for a ballot initiative.

They did, with more than 1,000 signatures collected in an effort spearheaded by the Community Environmental Legal Defense Fund and Southern Illinoisans Against Fracturing Our Environment (SAFE).

Supporters of the ballot initiative say it is an important statement and safeguard against what they fear would be devastating environmental and economic consequences of shale drilling.

Opponents of the initiative argue that fracking could provide needed economic stimulation for the county, and that the state regulations will help protect the environment. They also say that the initiative could open the county up to lawsuits by oil and gas companies, leasing companies or even landowners who want to lease their land for drilling.

“I don’t think we have the legal authority to override the state of Illinois,” said county commissioner Ernie Henshaw. “I think we’re going to end up in a lawsuit. They may get an injunction while this lawsuit is going on, but I think we’re in an undefendable position.”

He resents the idea that the Community Environmental Legal Defense Fund is, he thinks, pushing the ballot initiative as part of a larger anti-corporate and anti-fossil fuel agenda.

“I don’t want to be a test case for this group, and I think that’s what they’re looking for,” he said.

Long, who lives near Johnson County, disputes that characterization.

“The goal of our group is to protect rights wherever they are being violated,” she said. “The goal before us whether we are in the southeast, northwest, wherever is to protect the role of citizens putting their foot down and saying this industry is not welcome here.”

The Illinois Oil and Gas Association, an industry group, did not respond to interview requests.

Commissioner Henshaw has proposed creating a county oversight committee to study the issues around fracking.

The proposal has been ill-fated so far. The commission scheduled a vote on the idea January 6, but the meeting was canceled because of bad weather. At the next meeting, on January 13, the idea was tabled in the face of local disagreement.

He also invited the Community Environmental Legal Defense Fund. But fracking opponents have bitterly opposed the idea of an oversight committee, and rebuffed Henshaw’s invitation to be part of it.

“We cannot fathom why anyone would want to create an oversight committee unless it’s to slow the (ballot referendum) process down,” said Annette McMichael, a landowner and leader of SAFE  who has turned down landmen looking to lease her property for fracking. “A study is what people create when they want an issue to die. They already have the facts.”

Henshaw said his idea for an oversight committee has been misunderstood and misconstrued by opponents.

“Somehow this has gotten turned around, there are charges led by one group that I’m trying to go against the will of the people,” said Henshaw, who says he is personally “undecided” about fracking, though he thinks the technology exists to do it safely.

“My initial goal with this committee wasn’t in any way pro or con, I was trying to make it a bipartisan group…to start discussing some of the issues – what will the impacts be if fracking happens? What are the issues with protecting roads?”

McMichael thinks the ballot initiative has a solid chance of passing, especially given the results of an October poll by the Paul Simon Public Policy Institute at Southern Illinois University which found 20 percent of voters undecided on the issue, with the rest evenly divided.

The poll, which surveyed 403 voters in 18 counties, including Johnson, found native southern Illinoisans were more supportive of fracking than non-natives, and women were more opposed than men.

The poll also found very strong support for the region’s coal industry, meaning that even many people who support fossil fuel extraction in general have reservations about fracking.

“That was much stronger support (for limiting fracking) than a lot of people had anticipated – we feel very good about what’s going on,” McMichael said.

McMichael also pointed to a study released in November that found job creation in six states covered by the Marcellus and Utica shales was smaller and less significant than industry claims, and highly subject to market fluctuations. The study, by the Multi-State Shale Research Collaborative — researchers with various universities and advocacy groups — concluded that:

“…the job benefits of horizontal drilling in the Marcellus and Utica Shale have been exaggerated by the drilling industry and its supporters. While the industry has created jobs, particularly in Pennsylvania and West Virginia, the shale-related jobs numbers are far below industry claims. We show how shale-related jobs are in the range of thousands to–at best–a few tens of thousands of jobs. They are not in the hundreds of thousands of jobs as claimed by the industry and its proponents.”

Nationwide, more than 100 municipalities have passed bans or restrictions on fracking, though not all of them are areas targeted for oil and gas extraction.

In November elections, at least seven municipalities in Ohio and Colorado voted on whether to restrict fracking, with four towns voting in favor of restrictions. Elected and industry officials in both states maintain that state law allowing fracking trumps local ordinances. Colorado Gov. John Hickenlooper joined the oil and gas industry in a lawsuit challenging a fracking ban the town of Longmont adopted in 2012.

Colorado fracking opponents are collecting signatures to place a proposed constitutional amendment on the November ballot that would eliminate the state’s ability to pre-empt local bans on fracking or other corporate activities. The Community Environmental Legal Defense Fund and a network of about 50 Colorado groups are involved in that effort. They need more than 86,000 valid signatures by August 1.

Cliff Willmeng is an Illinois native who has helped lead a fight against fracking in Colorado since moving there several years ago. His town, Lafayette, voted in November to ban the practice. Willmeng said such “acts of legal civil disobedience” are an important tactic for people trying to protect their health and environment.

“Here in Colorado we’ve listened to every possible argument about how fracking can be regulated,” and found them all lacking, Willmeng said. “The most important thing for Illinois is that people do not willingly go into the dance of regulation, and instead enact whatever laws they see fit to protect their public health and local autonomy.”

McMichael said supporters of the initiative are not deterred by the threat of lawsuits.

“The bottom line for me is that that’s a chance that my community, my county is going to have to take because the alternative is worse – a lawsuit is less painful to a community than major destruction from fracking,” she said.

The right to drill

The ballot initiative is worded in a way that essentially assumes Johnson County residents have already agreed they want to ban fracking. But there’s been no comprehensive survey or vote among residents. Henshaw thinks there is significant support for fracking in Johnson County, and that many citizens do not want a county law deciding whether they can lease their land for drilling.

“We can’t say there’s no interest in fracking here because we have almost 200 people who have signed leases with energy companies,” he said. “Obviously people are interested in the potential revenue. You have a farm you can make money on – what right does the Johnson County board of commissioners have to come in and say, no, you can’t make money on your farm?”

One local fracking supporter is county commissioner Phil Stewart, who has farmed in the area since 1968. He disagrees with opponents’ contention that fracking would use inordinate amounts of water and cause environmental harm and heavy wear and tear on roads.

“I’m not all that concerned about (fracking) myself,” said Stewart. “I think it would be good for the county and the state…There’s plenty of water in Johnson County — it rains all the time and fills your lakes back up… And [the drilling companies] are just as interested in good roads as we are.

“In my opinion they’ll take the care of the land – they’re not going to do something that destroys everything and makes a big mess.”