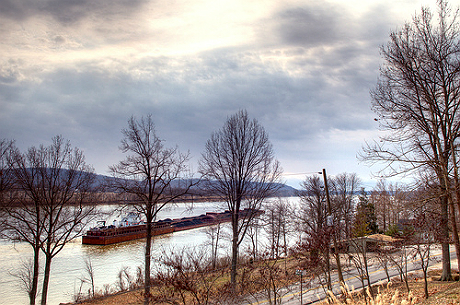 Coal being shipped by barge on the Ohio River near Derby, Indiana. (Photo by Cathy Haglund via Creative Commons)

While coal use has declined in recent years, most states are still spending billions to import the fuel for electricity generation, according to a new study.

Thirty-seven states spent $19.4 billion in 2012 importing 433 million tons of coal from other states and other countries, according to the report, “Burning Coal, Burning Cash,” released this week by the Union of Concerned Scientists.

The study, an update to a comprehensive 2010 investigation by the UCS, shows that between 2008 and 2012 coal imports actually dropped significantly – especially from other countries — because of the shift to natural gas and wind as power sources and also due to flat-lining power demand.

But billions of dollars are still spent importing coal, funds the group says could be better invested in local renewable energy and efficiency efforts. The logistics of the coal trade outlined by the UCS illustrate what critics describe as the inefficient nature of the supply chain for a still heavily coal-reliant power system in the Midwest and the South.

For example, Illinois was reportedly the first place coal was discovered in the U.S., and the state has long been known for its coal mining industry. But Illinois spends more than a billion dollars a year to import coal from other states for its power plants.

The vast majority of Illinois’s coal comes from Wyoming, which supplies about 40 percent of the country’s coal. Even as it imports more than 90 percent of its coal, Illinois also exports coal, including to some of the same states — like Indiana — that provide imports.

In the past decade Illinois and other Midwestern power plants have increased their reliance on western coal, which burns more cleanly but also has lower energy content. That means that larger amounts must be shipped to produce the same level of energy – causing more pollution in transit. It also means less economic benefit from the Midwestern coal mining industry, even as Midwesterners continue to suffer the air pollution impacts of coal-fired power.

“We import low-sulfur coal from states like Wyoming because our coal plants can’t burn high-sulfur Midwestern coal since they lack pollution controls,” said Steve Frenkel, UCS Midwest program director. “There’s often a mismatch between a state’s resources and their ability to burn coal – which leads to a state’s reliance on imported coal.”

Southern states among the most coal-dependent – North Carolina, Georgia, Alabama and Tennessee — saw imports drop between 25 and 36 percent between 2008 and 2012, according to the UCS study. Of the most coal-reliant states, only two saw imports increase: South Carolina, with a four percent jump, and Missouri, with a 23 percent increase.

Eastern states are less reliant on coal than Midwest and southern states, and they tend to  import Midwestern coal, since they are more likely to have the pollution controls that allow them to burn it.

Eastern states also import a greater share of their coal from foreign countries – including Colombia and Indonesia – meaning they are driving significant carbon emissions in shipping and also supporting mining industries in countries with looser labor and environmental protections.

However, the UCS’s recent update showed that international imports have dropped even more steeply than domestic imports in the past two years.

Michigan gets 49 percent of its power from coal, making it among the most coal-dependent states in the U.S., even though it has no coal mining reserves of its own. Michigan spent $1.2 billion in 2012 to import coal, most of it from Wyoming. It also imports smaller amounts of coal from surrounding Midwest states, including Illinois.

Michigan’s reliance on coal for power actually shrunk from 61 percent of its total portfolio in 2008. And while the state’s coal imports have decreased since then, the dollar savings were not proportional since the price of coal has gone up in the past five years. Likewise in Illinois, where imports dropped 21 percent but spending decreased only three percent.

Minnesota similarly gets 44 percent of its power from coal, though it also has no reserves of its own, spending $420 million to import coal from Wyoming and Montana in 2012.

In 2012 Michigan and Missouri were among the eight states in the UCS’s “billion dollar” club, spending more than $1 billion on net coal imports. Indiana and Illinois had been in the club in 2010 but dropped out this time around.

Illinois actually spent $1.45 billion to import coal in 2012, according to the UCS analysis, yet it exported $1.33 billion worth of coal so its net imports were worth only about $120 million.

The UCS’s 2010 report noted that Wyoming, along with Kentucky and West Virginia, supplied most of the U.S.’s coal. Wyoming produced 467 million tons in 2010 (and 353 million tons in 2012), compared to 36 million tons produced in Indiana and 33 million in Illinois in 2010 – the only two Midwestern states among the top 10 producers that year.

The UCS points to the prevalence of coal imports along with other problems with coal-fired power as reasons to increase investments in renewable energy and energy efficiency. It recommends doing this in part through tighter federal emissions regulations including on carbon dioxide; and through more stringent and wider-spread state-level renewable portfolio standards.

“Investments in clean energy bring well-documented economic benefits including new jobs, higher local tax revenues, and more income for farmers, ranchers, and rural landowners,” the report says. “Those benefits are even greater for states that now rely on imported coal, because such policies channel funds into local economic development— funds that would otherwise leave the state.”