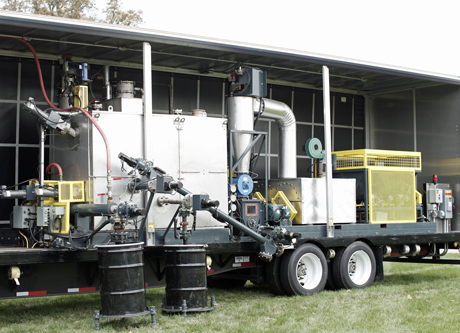 This mobile biofuel refinery solves supply chain problems by traveling directly to where feedstock can be obtained. (Photo courtesy Battelle)

So research-and-development nonprofit Battelle Memorial Institute is trying to take the production plant to the biomass field on the back of an 18-wheel tractor-trailer.

“The idea is that you have biomass that are in potentially remote locations that have low energy densities, are bulky and would be expensive to ship elsewhere,” said Mark Perry, program manager at Battelle Biofuels and Bioproducts. “So if you could take the unit to a biomass source, you could create a high-energy density bio-oil liquid from that, which would then be further upgraded to another product.”

Battelle has a pilot project at its headquarters in Columbus, Ohio, where a worker — usually Perry — feeds shovels of sawdust, pine chips and grass into the hopper right on site. The raw materials are fed into a reactor where a high-temperature process known as catalytic pyrolysis takes place; oil comes out the other end and can be shipped to refineries for use in either fuels or chemicals.

If it works, the model could pay off for Battelle, a top federal contractor and an operator of several national laboratories. The project could spare Battelle the $200 million cost of building a massive production facility. Battelle’s goal is to deploy many smaller units at about 10 percent the scale and cost of commercial-scale biorefineries.

“You’re not going to have a huge capital investment in these because these are going to be standard unit operations that will be manufactured in a factory, put on a truck and rolled out,” said Dan Anderson, a senior project manager at the Pacific Northwest National Laboratory, which is operated by Battelle.

Nor will the company have to spend much on transporting raw material to such a facility.

“It’s easier to transport 100 gallons of oil than 1 ton of wood, so it’s easier to have that processing step in the field. I think they [Battelle] will have some interesting cost advantages,” said Andrew Soare, a renewable fuels analyst at Lux Research. “That said, they have to prove that they can get yields and process efficiency. They’ll definitely miss out on some economies of scale.”

Battelle is first eyeing the chemicals market, followed by biofuels, Perry said. It is working to produce a drop-in biofuel, or a fuel that can be used directly in existing infrastructure instead of being blended in small amounts into petroleum — unlike conventional ethanol, which corrodes pipelines.

The company is planning to spin out a separate firm this year to develop the idea. It’s currently defining the business strategy.

The greatest potential may be in the Southeast, which is far from existing ethanol infrastructure and is amenable to different types of trees that can be used to make biofuels.

Battelle is looking at “what are the economics, how far away are the bio-oil producing machines from the hub so that it still remains economical,” Perry said. “You balance that with the capital cost and the operating costs of upgrading the reactors.”

Battelle began with a lab-scale unit about the size of a refrigerator. The company’s current pilot-scale model can convert 1 ton of biomass into 130 gallons of crude bio-oil a day.

There are few precedents for the Battelle projects.

According to media reports, North Korea is running trucks retrofitted with wood gasifiers, units on the bed of the truck that can convert timber or charcoal to a synthetic gas out in the field. And American biofuels company Sweetwater Energy is experimenting with converting plant materials to sugars in several satellite hubs and then transferring the sugars, rather than the biomass itself, to a central hub to ferment into ethanol.

“You just drive the unit to a farm, collect the poultry litter and pyrolize it,” said Agblevor, who did his initial work on the unit at Virginia Tech University. “The same concept can be applied to woody biomass where there’s a high concentration of feedstock.”

Battelle’s technology of choice is also catalytic pyrolysis, a thermochemical reaction devoid of oxygen that can take in a broad range of raw materials. In the process, inputs are heated to around 500 degrees Celsius. The resulting vapor is further treated and rapidly cooled down, producing a crude bio-oil. Biochar produced as a byproduct can be sold as a soil fertilizer or returned to the process to generate the heat needed to get to 500 degrees C.

But though researchers see big potential in thermochemical techniques, there are still technological barriers to bringing pyrolysis oil up to commercial scale.

“For pyrolysis, there’s often a refining step needed to go from pyrolysis oil into your fuel. That’s one of the challenges because that can be expensive,” Soare said. “You have to either build a separate refining facility or sell it to a refiner.”

The main problem with pyrolysis is that it produces oil that’s about 40 percent oxygen and packs less energy than petroleum.

Battelle researchers and their collaborators have developed catalysts to use in the pyrolysis process that lower the amount of oxygen in the resulting oil. The goal is to get the oxygen content as near to zero as possible, said Anderson of the Pacific Northwest National Laboratory, who has been involved with Battelle’s project since 2009.

Researchers are still working on perfecting a catalyst that can regenerate itself and be effectively used on the small scales that Battelle is targeting.

“I think that we’re talking about a couple of years to perfect the catalyst part of the technology,” Anderson said.

The fuel produced through Battelle’s process already meets U.S. EPA’s standards under the renewable fuel standard, meaning refiners can use it to comply with their annual targets for advanced biofuel use.

Perry said it was too early in the process to lay out a timeline for when mobile units producing oil may become a common sight in rural areas.

He said he has more immediate concerns: “We need a name for our company.”