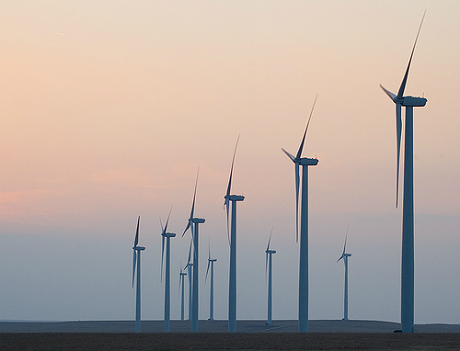 In Kansas, home of sprawling wind farms and the Koch brothers, conservative groups and renewable energy advocates are girding for a battle over the state’s green power law — a fight with broad political implications that’s drawing interest from far outside the state’s borders.

Kansas was the last among 30 states to put a renewable standard into law — one that requires utilities to step up their use of renewable resources for electric generation to 20 percent by 2020. Now opponents seek to be the first to win a repeal of a clean energy mandate.

The legislative tussle began two years ago in Kansas and is set to intensify this spring after the state Chamber of Commerce, led by a former Kansas House speaker, made a rollback of the renewable energy standard one of its legislative priorities.

But in Kansas, renewable energy means wind. And the wind industry, which rallied in opposition to similar legislation a year ago, said it’s imperative to save a state policy that’s helped bring the Sunflower State cleaner air and an economic boon.

“The [renewable standard] is a solid policy signal that Kansas is open for business when it comes to development of our renewable resources,” said Kimberly Svaty, Kansas public policy director for the Wind Coalition, a wind advocacy group in the south-central U.S. “To turn our backs on something that has been a dynamic driver for the state doesn’t make sense.”

The Kansas renewable standard was approved in May 2009 as part of much broader energy legislation that also authorized the controversial Sunflower Electric Power Corp. coal-fired power station in Holcomb, Kansas.

The measure requires investor-owned utilities and electric cooperatives to meet an increasing portion of annual peak demand with energy from the sun, wind or biomass. The minimum threshold steps up from 10 percent in 2011 to 15 percent next year to 20 percent in 2020.

The mandate came under attack in 2012 and again last year when a Kansas House committee chaired by Rep. Dennis Hedke, a conservative Republican from Wichita, introduced a bill that would have given utilities two additional years to meet the 15 percent requirement. The bill would have removed the 20 percent target altogether.

A Valentine’s Day hearing on the bill pitted conservative groups such as the Kansas chapter of Americans for Prosperity, a group founded with support from Charles and David Koch of Wichita-based Koch Industries, against some of the biggest names in the wind power business, such as Iberdrola SA, Vestas Wind Systems A/S and Siemens AG.

The legislation ultimately stalled. But now the Chamber, one of the state’s most powerful lobbying groups, has endorsed a full repeal. Kansas’ speaker of the House and Senate president have criticized the renewable mandate. And critics like Hedke believe the expiration of the federal production tax credit signals waning sentiment for such subsidies.

“The game, I think, has changed,” said Hedke, an outspoken critic of the Obama administration and its attempts to rein in carbon pollution.

Mike O’Neal, a former Kansas House speaker and president of the Kansas Chamber of Commerce, is more circumspect. He said the group disagrees philosophically with government mandates and decided to actively call for the repeal of the Kansas renewable energy law after a survey of members, mostly small businesses, showed increasing concern with rising energy prices.

O’Neal acknowledged that wind development has been good for the state and is careful to point out that the chamber isn’t “anti-wind.” Still, he believes the green power mandate is responsible for raising energy prices, and the group thinks renewable energy should compete on a level playing field with other fuels.

“We think the time is right, based on where we’re at, that [the wind industry] can and should stand on their own,” he said. “Let market principles determine it from here on out.”

The chamber cites data showing that industrial and commercial electricity prices in Kansas have marched steadily higher from 2008 to 2012, costing the state a competitive advantage. Kansas, which used to have the 12th-lowest retail electricity prices in the U.S., is now in the middle of the pack, according to data from the Energy Information Administration.

Renewable energy supporters agree that electric rates are a key issue. But they say blaming wind power for the increase is misguided. They point to studies by the Kansas Corporation Commission as proof that renewable energy has had a negligible impact on utility consumers.

The most recent KCC analysis in March 2013 shows the rate impact statewide was about 0.16 cent per kilowatt-hour of a 9.2-cent-per-kWh retail electricity price statewide in 2012.

“Meeting the RES requires less than 2 percent of the revenue requirement of the utilities while supplying more than 10 percent of the generation capacity in the state,” the report said.

With the Kansas Legislature only a week into the current session, there’s been no legislation yet filed to weaken or roll back the renewable energy law. But O’Neal of the Chamber believes it’s a matter of when, not if, that happens.

Hedke, the House Energy and Environment Committee chairman, said there are two ways the committee could take on the issue. It could pick up where it left off last year, or there could be a new bill filed.

Ironically, no matter how the issue plays out, it may not matter much to utilities.

That’s because they are already in full compliance with current requirements and in some cases very close to meeting the 20 percent requirement. They include Topeka-based Westar Energy Inc., the state’s largest electric utility with 700,000 customers.

Westar, which isn’t taking a position in the debate, has 670 megawatts of renewable generation in its portfolio. And the utility just signed a contract to purchase an additional 200 MW from a wind farm just southeast of Wichita that will go online next year. With the addition, about 17.5 percent of Westar’s peak retail load will come from renewable resources — almost exclusively wind, said Don Ford, the utility’s director of renewable business solutions.

That will give Westar about five years to add 200 or so megawatts of renewable generation to meet the 2020 requirement.

“We don’t anticipate any problem getting to 20 percent,” Ford said.

‘One small front in the larger battleground’

While the RES might not matter much to utilities, it matters a lot to the wind business.

Industry supporters said a rollback would have a devastating effect.

They say the numbers tell the story of wind’s impact on Kansas. The state has 19 wind farms collectively representing more than 2,700 MW of generation, according to the American Wind Energy Association. The industry is credited with helping generate more than 12,000 jobs and has pumped millions of dollars in taxes into local economies and millions more in lease payments to local farmers, backers say.

Kansas also has seven wind energy manufacturing facilities, including a $50 million Siemens nacelle assembly plant in Hutchinson. The state’s embrace of renewable energy is also credited with helping it attract a $250 million Mars Inc. candy plant to a site south of Topeka.

Others stress wind power’s increasingly important role as an export product. As utilities fulfill obligations under the renewable standard, more of the state’s wind energy production can be sent to states to the east that lack the same natural resource.

“Wind is a commodity that we have in great abundance here in Kansas,” said Karin Brownlee, a former state senator and Kansas labor secretary who recently became the spokeswoman for Kansans for Wind Energy, an advocacy group. “How is that any different than selling wheat or airplanes?”

Mark Lawlor is director of development for the Grain Belt Express Clean Line, a high-voltage transmission line that will be a conduit for sending Kansas wind power to points east. The 750-mile direct current transmission line being developed by Houston-based Clean Line Energy Partners will run from near Dodge City, Kansas, to Sullivan, Indiana, carrying 3,500 MW of wind energy.

Lawlor believes the debate heating up in the capital this spring has little to do with Kansas and more to do with a broader nationwide push by conservative groups to undo renewable energy standards elsewhere in the country.

As the push for a national renewable energy standard has been unsuccessful and regulations to cut greenhouse gas emissions have been slow to roll out, state-level initiatives have been powerful drivers of solar and wind projects.

That has put those state policies in the cross hairs of groups such as the conservative American Legislative Exchange Council, which last year adopted model legislation to repeal them.

“This is not about Kansas,” Lawlor said. “It’s about North Carolina and Ohio and Pennsylvania and New Jersey. Kansas is one small front in the larger battleground.”