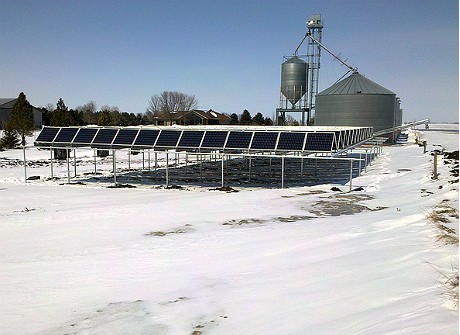 Installers say farms like this one in central Minnesota make ideal locations for solar arrays. (Photo by CERTs via Creative Commons)

Solar installations have been taking off in many areas of the Midwest, but perhaps nowhere more so than in farm country.

In Washington County, Iowa, for example, farmers with access to an unusual and lucrative combination of federal, state and utility incentives were anticipating payback periods of as little as two years, according to Ed Raber, director of the county’s economic development corporation.

Consequently, he said, “There are more solar panels in Washington County than in any other county in Iowa.”

The heat in Washington County, just south of Iowa City, has dissipated a bit, largely because the local utility – Alliant Energy – terminated its subsidy as of Dec. 31. However, solar panels continue to make inroads on farms in Iowa and elsewhere in the Midwest.

In Ohio, EcoJiva Solar has seen growing interest from farmers since its founding six years ago, according to sales director Jess Ennis. Of the more than 100 systems the company has installed, he said, the vast majority have been on farms.

At the outset, the company envisioned bringing solar energy to manufacturers, he said, but they were too financially squeezed for a big capital investment. Agriculture, on the other hand, was thriving – and quite receptive to the idea of going solar.

Take, for example, the panels that EcoJiva installed on a farm outside of Huron, Ohio.

“Within several months,” Ennis said, “we developed three systems north and south of there. Within a three-mile stretch of road, we now have four systems.

“Generally speaking, when we install a system, it creates a ripple effect.”

“You get systems out there, people see them and drop by,” he said. In the agricultural region of southeast Minnesota, where he does most of his work, Shellum said, demand among farmers “is definitely growing for us. We’ve done maybe a dozen installs. In the last month, we’ve done enough farm proposals to equal the number of kilowatts we installed last year.”

In Illinois, solar developer Michelle Marley agrees that word of mouth is important.

“It’s just now starting to get a foothold,” she said. “The greatest obstacle is getting the word out.”

Solar panels are a natural fit on a farm, a few installers observed. Shellum said that, for several reasons, they’re his “favorite type of installation.”

For one, farms tend to use a lot of power, with monthly electric bills sometimes running into the thousands of dollars. They need electricity to run fans, to heat and cool barns for dairy cows, to cool milk and produce, to dry grain and move it around.

Many farms also have barns with roofs that lend themselves to holding up solar panels. And if there’s not a suitable roof, there’s usually plenty of space for a freestanding array.

In addition, farmers are accustomed to thinking long-term and investing in their business. Many of them have maintained the farm in their family for generations, and expect it to continue as a family-owned enterprise that will reap the benefits of investment in solar energy for decades to come.

And they tend to be an independent lot who like the prospect of producing their own power.

Like Tim Ridgely, who grows corn, soybeans and wheat along with his son in central Illinois. In 2012, the Ridgelys put up a 17 kilowatt system in a field by their house and cut the electricity bill by about 40 percent, according to Tim Ridgely. Then, in 2013, they added 22 kilowatts, at a cost of 59 cents per watt after accounting for all credits, grants and subsidies they received.

Although he won’t have the full picture until next summer, Ridgely said, “We hope to be close to self-sufficient.”

Phil Rich had five systems totaling 110 kilowatts installed last spring on his farm in Washington County, Iowa. He’d purchased some used wind turbines earlier, and found they were costly and not as productive as he’d anticipated. His solar panels have been quite a different story.

Michelle Wei, the installer who put panels up at Phil Rich’s farm and at numerous others in Washington and Henry counties, said many of her customers tried wind energy, and then opted to try solar.

Regardless of the technology, she said, “farmers are really interested in renewable energy.”

“We try to do things that are environmentally friendly,” said Linda Gent, who had three systems totaling 96 kilowatts installed on her house and two hog units in Wellman, Iowa. But there’s no denying that subsidies played into her decision to go ahead, she said.

Alliant Energy’s benefit covered about 25 percent of the cost, she said. State and federal tax credits lightened the burden on her even further. Many Midwestern farmers also have tapped into the a USDA grant (Rural Energy for American Program) that can cover up to 25 percent of a project’s cost.

“When you put it all together, it makes great financial sense,” said Illinois developer Marley.

Without quite so much financial encouragement, Gent said, “We would have had to give it more thought.”