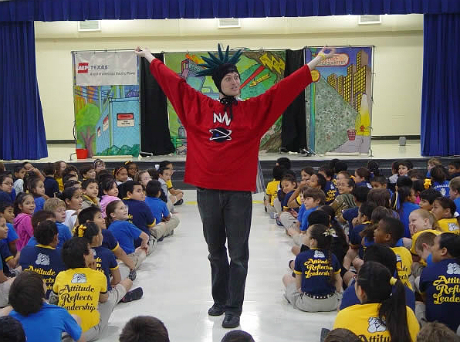 As low-hanging fruit gets tougher to find, utilities are being forced to think creatively about their energy conservation programs.

Eames is founder of the National Theatre for Children, a Minneapolis education company that stages thousands of shows each year in school gyms and auditoriums across the country. The productions are paid for by utilities and deliver lessons on electrical safety, renewable energy or energy conservation.

The aim is to spark kids’ interest in energy with an entertaining program, but the real target is often adults.

“The school program is an incredibly efficient way to get to those parents,” Eames said.

Most utilities in the Midwest are required to help their customers collectively achieve a certain level of energy savings each year. Many of those savings have been reached through lighting improvements, but those opportunities are expected to run out as more customers upgrade their bulbs.

That’s led to growing interest in programs that can persuade customers to save energy in other ways. Eames said one of the most effective ways to influence a household’s behavior is by educating and motivating its youngest members.

“We work for organizations that want to use school programs as a behavior-change mechanism,” Eames said.

Eames started the company in 1978. His first customer was Minnesota’s Northern States Power, now part of Xcel Energy, which hired him to put on school programs about energy conservation. In the 1980s the theater ran hundreds of programs teaching kids about recycling.

Today, utilities make up the biggest block of his customers. They include Ohio’s FirstEnergy, American Electric Power in Michigan, and Duke Energy, whose territory covers parts of the Southeast as well as Ohio and Indiana.

The comedic programs feature characters such as Nikki Neutron or Captain Wattage, played by professional actors who will tour a utility’s territory performing as many as 10 programs a week. Students and teachers are left with workbooks and other take-home materials.

The homework often involves getting Mom or Dad to take some action, whether it’s ordering an energy saving kit or scheduling a home energy audit. When a parent sends in a postcard or registers online, utilities can link the activity to a specific address or account and track the savings.

A spokesperson for Duke Energy said a report on the impact of its Energy Education in Schools program, which is managed by the National Theatre for Children, would be filed and made public sometime during the second quarter of 2014.

Since 2011, the school theater programs have reached more than 1,000 schools in Duke Energy’s service areas and been well received by both students and teachers, Duke Energy spokesperson Kristina Brandy Hill said in an email.

“This program is an important part of Duke Energy’s energy portfolio, not only in terms of measurable impacts, but also empowering students and their families to learn how to save energy and getting an understanding of how conservation can translate into practical applications in their homes,” Hill said.

The American Council for an Energy Efficient Economy (ACEEE) published a report in December on utility-sponsored behavior change programs that identified 25 different education programs that are run by utilities in K-12 or higher-ed schools across the country.

“These can be very cost-effective programs,” said Susan Mazur-Stommen, director of ACEEE’s behavioral efficiency program. ”They also operate on multiple levels, which make them a really good thing to do.”

These type of programs have potential to change behavior at school and in the home, with students and with their parents, Mazur-Stommen said. Where enough data exist to evaluate them, she said the energy savings consistently cost less per kilowatt hour than a kilowatt hour of electricity.

The fact that 10 of the 25 education programs ACEEE identified had launched since 2010 suggests the programs are becoming more common.

Eames, who’s been in the business for almost four decades, said a key to his company’s longevity has been educational integrity — basing programs on science and refusing to work with companies that want to push propaganda instead.

For example, he questioned a controversial pro-fracking program that toured Ohio schools last month, backed by a Disney-owned radio station.

“It doesn’t mean that you can’t have a balanced picture about energy that industry can support. Absolutely you can,” he said.

“We use this really special tool, live theater, and it’s so powerful that you have to be careful.”