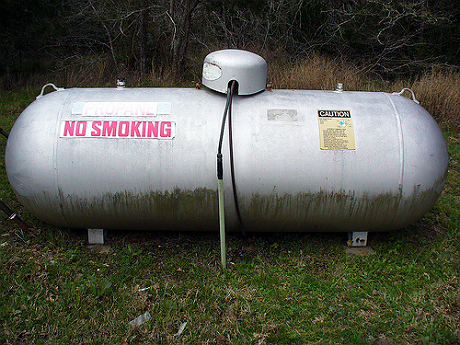 The Midwest is feeling the pain of skyrocketing propane prices.

A gallon of the liquid heating fuel that cost a little over $1 a year ago is selling for as much as $5 this month, according to local reports.

The Midwest has the nation’s largest share of households that count on propane as a primary heating source, according to the U.S. Energy Information Administration (EIA). Many of them are in rural areas.

Governors in Ohio, Wisconsin, Minnesota, Illinois and other states have declared emergencies amid tightening supplies.

Industry observers say the price and inventory issues currently straining the region are the result of a long chain of events that goes back years.

The U.S. is producing more propane than it did five years ago, but it’s exporting much more, too.

Domestic propane production increased 27 percent over the past five years to 1.4 million barrels per day, Reuters reports. Meanwhile, exports more than tripled in that time, from under 85,000 bpd in 2009 to a pace of 280,000 bpd in 2013 through October, the most recent month EIA statistics are available.

Sen. Ron Wyden, an Oregon Democrat who chairs the Senate Energy Committee, told Reuters through a spokesman that he believes the propane price spike is a “concrete example” of the risks consumers face when companies are allowed to freely export U.S. energy resources.

Others disagree on the impact of exports on the current squeeze.

“If we didn’t have the export market there, we wouldn’t have had the production,” said Roger Leider, executive director of the Minnesota Propane Association. “What would have happened is those liquids would have remained in the natural gas stream and been used differently.”

Even now there is a surplus of propane in Texas, which northern states have been invited to tap into if they can work out transportation logistics. That supply might not exist if not for the export market, Leider said.

Most of the Midwest’s propane comes from Kansas, which is the hub that’s been most constrained this winter.

“Our issue is we just don’t have enough gas in the right place,” he said.

Leider pegs the beginning of the Midwest’s problems to last year’s prolonged winter and chilly spring.

“We had people in the northern tier states who were using heat through April and May at a much greater rate than we have in the last few years. This prevented a real growth in inventories over that time period,” Leider said.

Over the summer, suppliers gradually build up inventories in storage tanks and underground caverns. Even with the late start to summer, the supply of propane going into fall was within the five-year average for that time of year, Leider said.

In its October 2013 winter fuels outlook, the EIA didn’t flag any concerns. The report projected Midwest homeowners to pay about 10 percent more for propane but use about 1 percent less over the course of the season.

A few weeks later is when the region’s propane supplies took a dive. For the week ending Nov. 1, Midwest propane inventories dropped more than 2 million barrels, the largest single-week draw in any November since 1993, according to the EIA.

The reason? A record-breaking corn harvest that was also damp. Corn needs to be dry before it can be stored. When fields are wet, as they were for much of the fall, farmers use large propane-fueled heaters to dry out the grain so it can be stored safely.

“We had an exceptional crop this year, so grain drying, because it was so wet, was going on longer than usual,” said Dawna Leitzke, executive director of the South Dakota Petroleum & Propane Marketers Association. “Not just South Dakota,” she said, but “Minnesota, Iowa, Nebraska, Wisconsin, Ohio, the whole region. Everybody got behind.”

Grain drying used more propane than usual, and later in the season, leaving less time to restock supplies before winter. A pair of early cold snaps put inventories further behind, Leitzke said, and most people know what happened next: enter the “polar vortex.”

Bloomberg blogger Matthew Klein argued in a Jan. 23 post that weather deserves little blame for the current situation. Instead, we should be pointing the finger at “lousy planning.” He argues that government should build up strategic propane reserves, as the U.S. Energy Department already does for petroleum and heating oil.

Others report that the origin of the supply issues goes back to the start of the U.S. shale boom. Bloomberg reports that increased production caused prices to plunge in 2011 and 2012, discouraging new production.

The focus now is on coming up with solutions. Several states have loosened transportation restrictions to accommodate for drivers who need to wait in long lines to fill up. Texas has also opened up its propane supply to northern states for two weeks.

What would help more than anything is a brief respite from the cold, but this winter has made clear that’s nothing we can count on.

Said Leitzke, “I don’t know when we’ll actually catch up.”