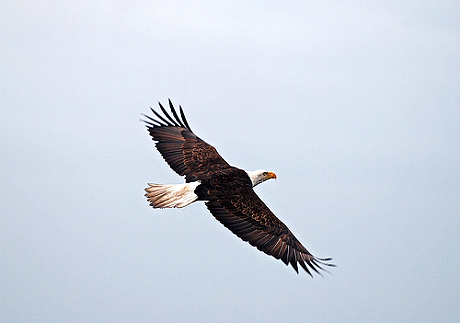 New federal rules that offer 30-year “take” permits under the Bald and Golden Eagle Protection Act have been described by wind energy opponents and some prominent conservationists as a license to “slaughter” the very symbol of America.

Wind energy advocates, on the other hand, say the rules provide necessary certainty for developers, who were made uneasy by a recent $1 million settlement between the federal government and Duke Energy Renewables over violations of the Migratory Bird Treaty Act (MBTA), which also protects bald and golden eagles.

In that case, Duke pleaded guilty to charges that 14 golden eagles and 149 other birds were killed at two Wyoming wind farms, and that developers should have known the wind farms were built in a way that endangered birds.

Meanwhile, wildlife groups that support wind power are in a tight spot. Audubon, the nation’s premier bird conservation group, is firmly against the 30-year permits.

“It’s a blank check for the industry, it’s an eagle-killing rule,” said Audubon director of national programs Mike Daulton. “They put in place a new rule that really does nothing for conservation. It just gives the industry 30 years of protection from prosecution under the law. We think it was a weak law done secretively and we think it will lead to more dead eagles.”

The rules, which went into effect January 8 and are administered by the U.S. Fish and Wildlife Service (FWS), create a voluntary system wherein wind developers can get permits allowing them a certain amount of unintentional harm to eagles for up to 30 years. As part of the process they also must create a conservation plan. The rules are similar to a program offering five-year voluntary permits that was launched in 2009.

Few wind developers have sought the five-year permits — meaning they risked facing fines in the hundreds of thousands of dollars and prison time — but presumably felt comfortable enough that they would not be prosecuted. Prosecutions under the Eagle Act and MBTA have been very rare, and unlike the Endangered Species Act (ESA) or Clean Air Act, there is no “citizen suit” provision allowing organizations or individuals to file lawsuits that can spark government enforcement.

But the Duke settlement, the new rules and other developments indicate that the government plans to be more aggressive in enforcing the Eagle Act, experts say. Companies can be prosecuted for past violations, and they can also apply for permits retroactively.

“Even though the permit is voluntary I think it will be standard,” said Barbara Craig, a Portland-based partner with Stoel Rives LLP, in a recent webinar hosted by the firm. “A few years ago people in the Midwest wouldn’t be as worried because bald eagle populations are stable and building…The Fish and Wildlife Service is more concerned about golden eagles because of their populations. But the new norm applies equally.”

Wind developers in the west have generally had more reason to worry about eagle take than Midwestern developers, since western states are home to more golden eagles, which are scarcer than the bald eagles that proliferate in the Midwest.

Mark Martell, director of bird conservation for Audubon Minnesota, said eagle mortality from wind farms is not a serious problem in the Midwest.

“I’m sure there are the occasional eagle collisions, but in the overall scheme of things it’s probably not having an effect at the population level,” he said. “Minnesota alone probably loses more eagles to lead poisoning than the entire region does to collisions with wind [turbines] over many years.”

Martell noted that the growth of wind power helps reduce the amount of mercury from coal plants in the atmosphere, creating a benefit for eagles.

Nevertheless, he opposes the 30-year permit, in part because he fears it could set a precedent for long-term permits to be given to other types of eagle takes. The 30-year permits are not specific for wind projects but are for “programmatic” ongoing activities. Permits are also required for individual potential “takes,” including biological research, Native Americans’ collection of feathers, or construction of power lines near nesting areas.

“The concern is the 30-year permit does not give us a whole lot of information or reaction time if something does go wrong,” he said. “That’s several generations of eagles. A lot of damage can be done in that time.”

The Natural Resources Defense Council, generally a strong advocate of clean energy, is among the environmental groups that has opposed the new rules. NRDC attorney Katie Umekubo said the agency rushed to push the change through.

“We must improve our renewable energy resources while protecting our wildlife,” she said. “But what the Fish and Wildlife Service has done with their new rulemaking is going in the wrong direction.”

“The reason we don’t agree with the change in duration [of permits] comes down to the science,” she continued. “There’s a lot of ongoing research, but we have a lot of unanswered questions as well – like how do we deal with impacts to eagles, and how are eagles interacting with wind farms now. Our attention should be focused on trying to answer those questions before we make sweeping changes to the rule.”

She added that the NRDC has worked with the FWS to analyze research on eagles, but that much more needs to be done, including the compilation of “basic baseline information about our eagle population that we don’t have right now.”

Both detractors and supporters of the new rules point to uncertainty over how a key provision will play out: evaluation periods every five years wherein the FWS looks at a wind farm’s effect on eagles and may revise the permit based on what they find.

The provision undercuts the certainty that the industry had sought, since the 30-year permit – meant to cover the life of a typical wind project – can actually be changed mid-stream. But Craig said she thinks that the five-year permit evaluations will not create additional burdens for wind projects.

“I’ve worked a lot on habitat conservation plans – to get long-term certainty you end up committing to a lot of monitoring, adaptive management and mitigation measures up front,” said Craig. “But the benefit in my view of revolving five-year (evaluations) is that you don’t have to put all that investment up front… It’s intended to be more iterative and more adaptive.”

She explained that the original permits will be based on FWS models that may overestimate a given project’s effect on eagles. So the five-year reviews should not give reasons for any additional burdens on wind developers.

“I’m optimistic that if the developer follows the guidelines and has done good site selection and micro-siting, that the take estimate [in the permit] will be overly conservative,” she said. “I wouldn’t assume [the permit conditions] will get more onerous.”

Critics of the new rules point out that there are no promises about how the agency will carry out and respond to the five-year evaluations, nor are there guarantees that the information obtained in the evaluations will be made public.

“We could be completely shut out of the process and not have access to what’s going on, or not be able to engage in the decision-making process,” said Umekubo. “That’s a huge issue.”

“I think they have a lot to prove to show they could do meaningful five-year reviews,” said Daulton. “On the one hand they’re understaffed, they don’t have enough staff to monitor the process, so it’s good for them to do every 30 years. But then they want to turn around and say we’re doing five-year reviews. You can’t have it both ways. What we’ve heard is they don’t have the resources to monitor this process adequately.”

A backlash against wind

Per Ramfjord, another partner at Stoel Rives, noted during their webinar that there are no permits offered under the MBTA, hence wind farms that take eagles could theoretically be prosecuted under that statute even if they have a permit under the Eagle Act. And the MBTA involves “strict liability,” Craig and Ramfjord noted, meaning unlike under the Eagle Act it doesn’t matter if the take is intentional or involves “wanton disregard” — or not.

How the new Eagle Act rules affect implementation of the MBTA is among the issues that remain to be seen, the lawyers said during their webinar.

But Ramfjord said companies should feel confident after working with the FWS to obtain a permit under the Eagle Act. The agency has “made clear that where developers have followed that guidance, they will be shielded,” he said.

The lawyers also said that pressure to enforce the bird protection acts seems to be coming from “one single prosecutor,” as Ramfjord put it – Robert S. Anderson, senior counsel of the Justice Department’s Environmental Crimes Section of the Environment and Natural Resources Division. Ramfjord said he thinks Anderson’s approach “is not specific to wind” and that prosecutions may also be aimed at solar or other renewable energy projects hurting wildlife.

Wind advocates see the increased scrutiny as in response to backlash against the wind industry from critics who say it has gotten a free pass from the government while the oil and gas industry faces prosecution.

But Ron Sisson, head of the Republican conservation group ConservAmerica which has done outreach to constituents around eagles and wind, called the new rules a “common sense solution” in promoting both wind power and eagle protection. In a December article for The Hill, Sisson wrote:

“Every human activity has some form of environmental impact, which means we will always need to balance protecting the environment with responsibly taking advantage of our natural resources. American wind power helps curb the biggest threat to wildlife. Today, installed U.S. wind power avoids 100 million metric tons of carbon dioxide emissions annually – the equivalent of taking more than 17 million cars off the road…Developing energy from America’s abundant renewable natural resources must be our priority, not only for the tremendous economic benefits it yields but because it’s one of the best tools available to help conserve wildlife, including eagles.”