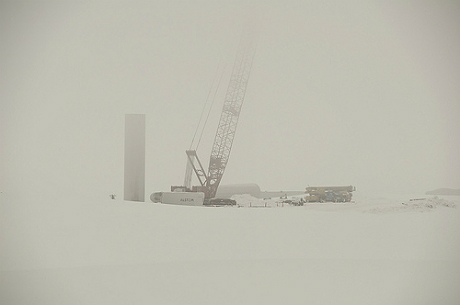 A wind turbine under construction in Meeker County, Minnesota, in 2010. (Photo by likeaduck via Creative Commons)

Although a key federal tax credit expired at the end of 2013, the U.S. wind industry is still going strong.

At least for now.

“The industry ended the year with an unprecedented number of new wind farms under construction and a record number of power purchase agreements signed with utilities as well,” said Emily Williams, a senior policy analyst for AWEA.

The project pipeline is now large enough that wind farm construction companies believe they’ll be busy through at least the end of 2014.

“’14 is going to be a great year. ’15 should be a good year,” said Tim Maag, vice president for U.S. wind energy at Mortenson Construction. “We expect the latter part of ’15 to slow up, and then obviously 2016 and beyond would be uncertain.”

The industry is able to keep busy beyond the tax credit’s expiration date because of a change made in the most recent extension.

Previously, in order to qualify projects needed to be completed before the tax credit expired. The extension Congress passed for 2013, though, only asked that projects be started before the end date.

“It’s definitely more than just sticking a shovel in the ground,” Williams said, describing the activity companies have used to qualify. Some have done road work or dug out foundations, for example.

Wind developers were also given an option known as “safe harbor,” in which they could qualify for the production tax credit by spending 5 percent of a project’s budget before the end of the year. One common approach is making down payments on equipment.

More than 12,000 MW of wind projects was under construction at the end of 2013, according to AWEA. Meanwhile, the association is aware of at least 5,200 MW of projects with power purchase agreements that have not started construction and may seek qualification for the tax credit under safe harbor.

The largest single year so far for wind construction was 2012, when 13,131 MW came online in a push to qualify for that year’s expiring tax credit. Last year, completed installed capacity plunged to just 1,084 MW.

Mortenson’s record year was also 2012, when it built about 2,400 MW worth of wind projects. The company currently has eight projects totaling more than 1,500 MW under construction now, and it has another eight projects worth 1,300 MW scheduled later in the year.

Not all of those projects will be completed in 2014, Maag said, so the company may not break its 2012 record, but it’s certainly a rebound.

Mortenson’s projects include three MidAmerican Energy wind farms in Iowa that it started working on in the fall. “As soon as the frost comes out of the ground in Iowa, we’ll be back to work,” Maag said.

AWEA noted that the surge to qualify projects by the end of 2013 is also keeping wind turbine and equipment manufacturers busy.

The momentum will eventually run out. AWEA warned in its press release that if Congress doesn’t act, uncertainty about tax policy will deter new development, and the boom-bust cycle will continue.

Correction: An earlier version of this article incorrectly stated that 5,200 MW of proposed projects had already qualified for the production tax credit under safe harbor. AWEA says it won’t be known if those projects meet the requirements until they are completed and have submitted their taxes.