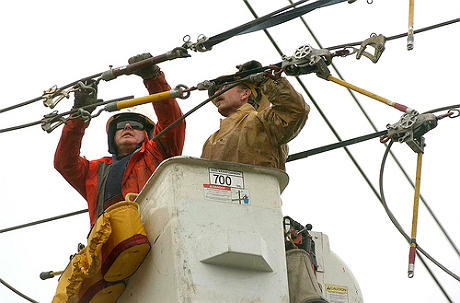 It goes by many names — the great crew change, the silver tsunami, the talent gap — and it’s a problem nearly all industries are facing. The baby boom generation is retiring, leaving a large hole in the U.S. workforce.

But the trend is especially troubling for the utility sector, which has traditionally employed “lifers” with highly technical skills in jobs that require deep knowledge and quick reaction to problems.

Though experts predicted the baby boomers’ departures would begin several years ago, the recession put many workers’ retirement plans on hold. Utilities have also been able to stave off losses by hiring back retirees as contractors — at a high price to employers that may be responsible for pension costs on top of contractor pay. But as the economy recovers, an increasing number of experienced workers are expected to head for the exit.

“Other industries have tended to experience higher turnover on a regular basis, so they are more experienced and better equipped in terms of talent acquisition and retention,” consulting firm PricewaterhouseCoopers LLP wrote in a December report. “Utilities, by contrast, may now have to rethink both their approach to process and their employee value proposition as they confront the increasing turnover of newer and high performers, as well as the accelerating loss of experienced employees due to retirement.”

Industry observers predict that most utilities will be hiring electrical engineers, plant operators, technicians and power line workers in the coming years, but they largely agree that companies are unlikely to replace every departing employee. The Bureau of Labor Statistics projects that the electric power generation, transmission and distribution workforce will shrink by 11.7 percent by 2022 as the industry becomes smaller and more efficient (EnergyWire, Jan. 7).

When utilities do hire, PwC urges them to think ahead about where they’re going to see gaps in their staffs and to rigorously document the complicated processes that can take new recruits a long time to learn. Moreover, companies need to make sure process documentation and training manuals are being made available electronically in order to appeal to a younger generation of workers, said Dennis Curtis, power and utilities risk assurance director at PwC.

“Being able to adapt your knowledge repository is a new investment that many utilities are making,” he said.

But utilities can’t expect the workers they do train up to stay with their first employer, as many of their predecessors did, he said. For those who do stay on, expected shifts in grid technology could drastically alter workers’ job descriptions, creating the need for increased cross-training (E&ETV, Jan. 28).

“Utilities need to start thinking in those terms of how they build well-rounded employees and not just someone who does risk analysis for 15 years,” said Philip McLemore, power and utilities talent director for PwC. “Companies need to be more collaborative and use the power of working in groups to appeal to new workers and create opportunities for people to learn from those who have been there, done that.”

To cut the learning curve, utilities will likely ramp up recruiting from within their own industry.

“Sometimes the easiest way is not to bring in a newbie,” said Mike Hyland, senior vice president of engineering services for the American Public Power Association. One company might find it’s in its best interests to poach from another, which will lure away a worker from a third firm, and so on.

“The problem is, you don’t want to be last in line,” he said.

Utilities can get ahead of that problem by making sure their compensation packages rival those of their peers, but a bigger concern is that utility workers will move on to other opportunities at flashier companies. Apple Inc. and other tech firms are fishing from the same shrinking pool of U.S. engineering talent.

To that end, utilities have boosted partnerships with universities and reached out to high school students to get future workers interested at an early age. Utilities are also targeting recruitment of women, minorities and veterans, Hyland said.

Community colleges are tapping into the market, too. In response to the rapidly changing energy field, two-year schools are altering their education models to load specialization toward the end of programs, giving graduates time to tailor their career plans to the current job market, said Ann Randazzo, executive director of the nonprofit Center for Energy Workforce Development.

“If you educate that way, you can push out that need to very specifically identify demand,” she said.

Though the hiring model has traditionally been to bring in workers through five-year apprenticeship programs, many employers are finding that younger workers whose career plans may be more ephemeral sometimes need a shorter-term taste of the industry, Randazzo said. Some groups have therefore created six- to eight-week boot camps for occupations like power line repair.

“You learn how to climb [utility poles], you might earn your [commercial driver’s license], you understand you’re working outside,” Randazzo said. Participants in such programs “are not going to leave those apprenticeships” because they go into the job knowing what to expect.

Because of the physical nature of power line work, utilities are hiring a lot of younger workers to fill those positions, but not as many as they used to, Randazzo said.

“Yes, there is a retirement bubble that’s there, but companies are hiring,” Randazzo said. “They’re not hiring in many cases exactly the same employees that retired.”

As utilities introduce more automation and efficiency features to their grids to improve reliability, they’ve seen a major tangential benefit: They’re able to make do with a smaller workforce.

As smart grid innovations allow utilities to remotely monitor customers’ meters, the Bureau of Labor Statistics predicts meter reader jobs will decline by 33 percent by 2022. In fact, the bureau expects nearly every occupation in the industry to shrink over the next decade. Among the few jobs that will grow are nuclear technicians, wind turbine service technicians, and environmental scientists and specialists.

Twenty-five years ago, a utility might have sent out a five-person crew to check out a power line, Hyland said. Now, with bucket trucks to lift them to the line and electric tools to facilitate work, a two-person team is able to complete the same job, he said.

Staffs are slimming in other areas, too. Some utilities, especially the smaller ones, are starting to bring in consultants, rather than hire their own engineers, Hyland said. With the advent of automated voice systems and online bill pay, many utilities are cutting down or altogether closing their customer call centers, he said.

“Anytime a person leaves [a utility], they’re going to look at how did the job change,” Randazzo said. “When you look at the numbers, just because 100,000 [workers] may be leaving, 100,000 won’t necessarily be replaced.”

Over time, additional advances will likely continue to drive down workforce numbers.

“The workforce we have, we’re using smarter,” Hyland said.