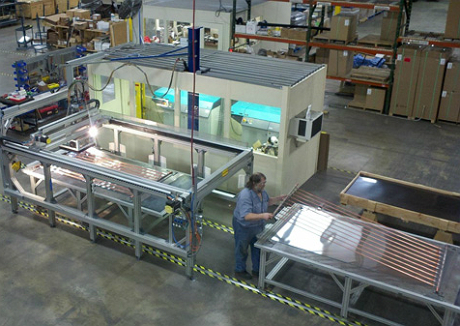 While sky-high propane prices are causing hardships for many businesses and homeowners, they’re also helping generate interest in renewable alternatives such as wood, solar and geothermal.

Companies that sell solar thermal, geothermal and wood furnaces are reporting an uptick in phone calls and inquiries over the past few weeks as propane customers in the region suffer through near-record prices and localized shortages.

The evidence is only anecdotal at this point, and most said the buzz hadn’t yet translated into new sales, but at least one shop is ramping up production in anticipation of new orders.

Northwest Manufacturing, which makes wood-fired furnaces under the WoodMaster brand, started offering overtime this week to workers at its factory in Red Lake Falls, Minnesota, as it attempts to double production. It also plans to make up to six new hires.

“It’s been just a blur since [three weeks ago],” said Todd Strem, the company’s sales and marketing manager. “It’s definitely affected us in a positive way.”

This is typically a slow time of year for heating system sales, Strem said, but WoodMaster’s dealers are reporting a steady stream of people stopping in to ask about the furnaces. The company’s website traffic has more than doubled in the last month.

“I can’t say it’s overwhelming, but to be honest, yeah, there’s more interest right now than there has been for a bit,” Herwig said. “And now is usually our quiet time.”

Herwig estimated that they’ve received six or seven phone calls in the past two weeks from people seeking quotes or other information about geothermal systems. During busier months, it’s typically only four or five per month.

It’s too soon to say whether that interest will translate into new sales and installations. Herwig suspects that will depend on what happens to propane price in the coming weeks.

“We can feel the interest level has picked up in the last two weeks,” said CEO Randy Hagen. “It’s too early to convert that into new orders yet, but our quoting level for those types of customers has definitely increased — a lot.”

A solar thermal system won’t entirely eliminate a home or business’s heating bill, but a typical system might cover 65 percent of water heating or 30 percent of space heating.

The price for a system varies significantly depending on the size, features and location, but an average cost for a residential system is around $10,000, Hagen said. Some of that cost can be offset with state and federal incentives.

However, amid a spike in propane prices, the payback time on solar thermal, geothermal, and wood heating systems looks much better today than it did at the start of winter.

Northwest Manufacturing sold a WoodMaster system to a school in northeastern Minnesota that was previously heated with propane. Strem said the original payback time it calculated for the school was around six or seven years.

If propane and wood pellet prices were to stay where they’re at — a big “if” — Strem said the school district could break even on their investment in as little as two years.

The Rural Renewable Energy Alliance, a Minnesota nonprofit that manufactures and sells subsidized solar furnaces to low-income families, isn’t yet sure how the propane pinch will affect its program, but program manager Shannon Wheeler said it certainly underscores its importance.

“It makes that work all the more necessary,” Wheeler said. “Our families that are on propane and also have a solar air heat system … are not going through their propane as quickly and hopefully don’t have to refill with these higher prices.”

How long propane prices stay high will likely determine how much of this winter’s interest in renewable alternatives can be converted into new installations later in the year.

Said Strem: “It’s going to make for an interesting year if this continues.”