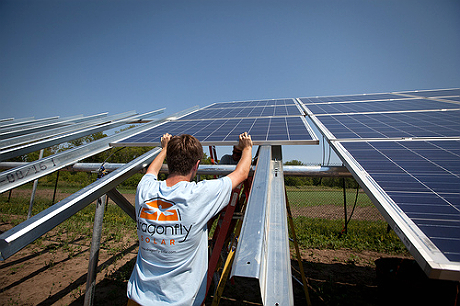 Solar energy, already on a roll in Iowa, could get another boost from three bills under consideration in the state legislature.

One bill, introduced on Wednesday, requires Iowa’s major investor-owned utilities to install 105 megawatts of solar power by the end of 2020, among other provisions.

Another would appropriate $18 million to the state’s three major universities, requiring each of them to install at least two megawatts of solar capacity by June 2017.

A third bill would double the money in the state’s tax credit fund for solar or other renewable energy systems. The fund was created in 2012 with $1.5 million in tax credits to be made available each year. Iowans collected about $620,000 in 2012, and claimed the full $1.5 million in 2013.

In fact, 94 applications in 2013 came in after the fund was depleted for the year, according to an Iowa Department of Revenue spokeswoman, and will be the first applications processed in 2014.

“I’d like to make sure all the projects applied for in 2014 get funded,” said state Sen. Rob Hogg.

He believes an expansion of the tax credit has a good shot at passing, considering the widespread – and bipartisan – support when it was initially approved in 2012. It passed on votes of 45 to 1 in the Senate and 82 to 14 in the House of Representatives.

“I’m hopeful we can make the case for job creation,” he said. “Like a lot of things in the energy sector, we provide incentives to get them going, so people can see the promise of solar.”

‘All about the payback’

Tim Dwight, a solar-energy developer in Iowa who favors an expanded fund, said solar installations are largely driven by finances, and that more tax credits will lead to more solar energy in the state.

“When you talk to solar customers, it’s all about money and the payback,” he said. “I definitely believe it does help.”

Also, he said, people who may not be completely comfortable with solar energy are reassured by what is, in effect, an endorsement by the state.

“It gives validity (to solar energy) because the state is backing this,” he said. “The state was a little cautious at the beginning, but they are starting to understand the technology. They know it’s good for the economy and the environment.”

Hogg said the time for the state to encourage investment in solar energy is now, before federal tax credits expire at the end of 2016. The proposal to hike Iowa’s solar fund would expire at the same time.

“There’s a need to increase the cap so that all the people who want to do these projects can take advantage of the federal credit.”

Five years ago, he said, the largest solar array in the state could produce 7 kilowatts. The largest now, located at Luther College, can generate 280 kilowatts.

“Businesses are now routinely putting 15 or 20 kilowatts on their rooftops,” Hogg said. “We’ve got dozens – even hundreds – of arrays. It’s really taking off, and the state credit is playing a big role in that.”

‘Iowa ought to be up there’

“I think there’s some excitement about that on the college campuses,” he said, and pointed out that, as of September 2012, the leading Midwest campuses for solar-energy production were Oberlin College and the University of Toledo, both in Ohio.

“Iowa ought to be up there.”

Another initiative likely to give a boost to Iowa’s booming solar industry is the bill introduced yesterday, SF 2107, that would require the state’s investor-owned utilities to produce 105 megawatts of solar power by 2020.

In 1983, Iowa was the first state in the nation to pass a renewable energy standard. It required the state’s two major investor-owned utilities, MidAmerican Energy and Alliant Energy, to contract for a total of 105 megawatts of generation from renewable sources, including photovoltaics, wind, biomass, anaerobic digestion and small hydropower.

The state has blown past that, with over 5,000 megawatts of installed wind capacity and more on the way. Currently, Iowa has only about 1 MW of solar capacity installed, according to the National Renewable Energy Laboratory.

As Dwight sees it, the 1983 renewable energy standard provided the push that lead to Iowa’s now robust wind-energy industry. And this bill, in his view, “symbolizes how we want to start a solar industry.”

SF 2107 contains provisions to encourage small-scale solar installations. It stipulates that at least 10 percent of the 105 megawatts be purchased from or produced by generators with a capacity no greater than 20 kilowatts. The bill also requires utilities to establish a community solar garden program and creates an “alternative tariff rate” mechanism to credit customers for excess solar power they provide to the grid.

“Utilities would have to find a way to make it happen,” Dwight said. Given that wind in Iowa is now “a mature industry,” he said, “We feel it’s appropriate that solar now has a goal.”