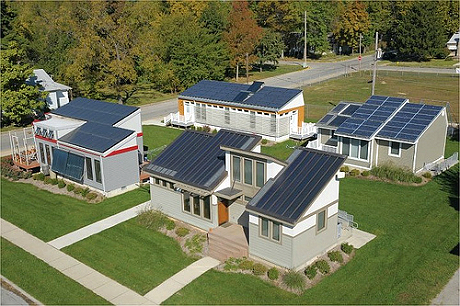 The Solar Village at the Missouri University of Science Technology, comprised of previous Solar Decathlon entries, is home to a microgrid demonstration project. (Photo by MU Extension via Creative Commons)

The case for colleges and universities to invest in microgrids often includes mitigating the risk of prolonged blackouts caused by natural disasters such as hurricanes, earthquakes, and wildfires.

In the Midwest, where those threats are remote or nonexistent, there hasn’t been as great a sense of urgency to boost electric reliability on campuses as there has been on the coasts.

But as electric grid reliability becomes a growing concern, green energy becomes a bigger priority, and the economics of microgrids evolve, more Midwest schools are seeking greater control of their energy use.

“Higher education facilities … really need to have reliable power, and unfortunately, the United States’ electrical grid is less reliable now than it was in the past,” said Peter Strazdas, associate vice president of facilities management at Western Michigan University. “That’s driving a lot of this microgrid conversation.”

Western Michigan University in Kalamazoo converted an aging coal-fired steam plant in the 1990s to a cogenerating natural gas facility that produces both heat and electricity. It’s continued to make investments since then in controls that improve its ability to manage both generation and consumption of energy on campus.

The projects have paid off in better reliability, Strazdas said. When snow storms knocked out power for days to much of the city earlier this winter, Western Michigan’s 150-building campus was “like this one light in the middle of our city,” he said.

The campus wouldn’t be considered a true microgrid by most definitions because it doesn’t yet have the ability to operate in “island mode,” completely independent of its local electric utility. In the winter it can generate all the power it needs on campus, but in the summer it still needs to import power from the electric grid.

They’re also a little ahead of the pack in the Midwest, though several other schools have built or announced microgrid projects in the region, including the Illinois Institute of Technology, the Missouri University of Science and Technology, and the University of Wisconsin-Milwaukee.

Microgrids are a good potential fit for colleges and universities for a couple of reasons, according to Michael Burr, director of the Microgrid Institute, a Minnesota-based think tank. One, they’re a defined space with a single utility customer, which simplifies the contractual issues. Secondly, many schools already own on-site generation, which is by far the most expensive component of a microgrid system.

“There is potential for a lot of those systems to be refined, updated and expanded into a proper microgrid, and there are a fair number of companies that are keenly interested in doing that,” Burr said. “They view colleges and universities as a very natural place to start.”

Among these companies is Honeywell, which has been “aggressively” marketing its microgrid products and services to colleges and universities, according to Kent Anson, vice president for higher education at Honeywell Building Services.

“The number one message for universities across the country is: think about what would happen if they got hit with a storm,” Anson said.

Their poster child is the U.S. Food and Drug Administration’s White Oak campus in Silver Springs, Maryland, which kept power on during Hurricane Sandy by switching its Honeywell-built microgrid to “island mode.”

The risk to sensitive lab equipment is very real, according to Raymond Hecker, a consultant whose company, Precision Power International, sells power protection equipment to the life sciences industry.

Instruments such as lasers, spectrometers and chromatography machines can take months to recalibrate in the wake of power disruption. “That’s the bigger issue,” Hecker said.

Schools can invest in smaller, backup power for individual labs, but when they need to protect several labs across multiple buildings, the case for a campus microgrid becomes more compelling, Burr said.

The potential benefits of campus microgrids go beyond protecting research, Burr added. Many schools are interested from a philosophical perspective in greening their energy sources, and microgrids make it easier to integrate renewables such as wind and solar. They can also showcase a school’s engineering prowess and serve as teaching tools.

“You’re probably not going to install a microgrid unless you have a really strong incentive or need for high resilience,” Burr said. “You need ultra reliable power, and that’s why you look at microgrids.”

As the technology advances, though, Burr believes economics could take over as a driving force. Solar panels and fuel cells are becoming more competitive with grid electricity, and it’s conceivable schools might someday cut their energy bills with a microgrid.

“We have a number of projects out there to demonstrate the technology,” Burr said. “I think that the next demonstration projects are going to be the ones that start to show how microgrids are actually cost competitive against utility grid power.”